It’s not surprising that limestone Symi has an underground.  Nor is it surprising that with very little rainfall the caves seem to be all ‘fault-caves’ caused by rock movement along fault lines (see). The result is that they are too small and inaccessible to have any history of use by people or animals.  I know of two exceptions, the ‘Wendy’ Cave, and Skordhalos Cave.  The steeply-inclined Wendy Cave has been used by people only to the extent that rubbish has been thrown into it after nearby church festivals.  The much larger Skordhalos Cave was probably occupied in the distant past by people and animals and archaeological excavation of the floor may well be productive of interesting information.

Consisting entirely of lava, volcanic rock, ash and pumice, by contrast Nisyros has no natural caves save a handful of wave-cut shallow openings and enclosed rock-overhangs.  But it has a vast, fascinating wealth of historical underground living.  The reason?

Initially, thick deposits of consolidated ash and pumice facilitated excavation into steep valley sides for primitive cave-dwellings.  Volcanic soil being extremely fertile the island could, and did, support a very large population, cultivating thousands of narrow terraced fields in many cases stretching to the tops of mountains.  The soil was so valuable that when the original cave was extended these were built underneath the terraces with either cultivation or a threshing circle on the ‘roof’.  In a few instances the original cave was extended several times, some becoming fortified monasteries.  Both Siones and Armas are very good examples of this, with dwellings, accommodation for animals and a church within high enclosing walls with the cave subsequently used for cool storage.

At Nifios, a high level hidden ‘valley’ (really an inactive volcanic caldera), settlement dates back to Dorian times.  A cluster of dwellings are built into the crags with a church at the back.  Part way along the valley is a tiny underground vertical chapel.  It’s accessed by a low entrance hidden under overhanging rocks, a steep flight of stone steps, a central pillar carved from the rock, and an altar.

My guess is that there are thousands of ancient dwellings on Nisyros and possible as many as half of them are at least in part underground.  This year I revisited one which I find particularly fascinating.  With three rooms or chambers, one behind the other going increasingly deeply into the mountainside, it displays a number of characteristic features

The entrance chamber, probably about 4 metres by 3, has the remains of a still for distilling ‘tsiporo’, the local ‘raki’ and ancient amphorae for storage of grain or olive oil.  This room is still used by the local farmer, as evidenced by basic agricultural tools and paraphernalia – and empty plastic water bottles chewed by rats.

Behind that, with tree roots hanging down through the roof, is a larger room about 5 metres by 4.  More amphorae in here together with two ancient wooden hand-ploughs, one tipped with iron. But especially interesting is the tiny niche with an altar finely carved out of black volcanic rock.  I find this niche fascinating, hidden as it is from the eyes of persecutors during Ottoman occupation. The edges of the doorway are painted white, a characteristic of many small mountain churches. Inside is a cornucopia of carved stones stacked on the sides rather than part of the construction.  At least one is from another time and place, possibly dating back to classical times. It’s an example of the collecting of such pieces, to me implying that they were, probably still are, regarded as talismanic.  There are a number of other examples of such pieces on Nisyros, easily identified because the rock is of a type found nowhere on the island and they are shaped and carved.

Further back again is a stone wall with a low entrance into a large cave. The floor is rough-dug and sloping up towards the back, the roof is curved, low at the edges with many tree roots reaching down in search of moisture but finding none.  The whole inside of this place is powder-dry.  Not a place for arachnophobes.

I’m giving no indication as to where this place is. No video of the route I took.  No photo of the outside so it can’t be identified if you chance to walk past.  If it was in the UK it would be a folk museum.  Thankfully, here it’s probably regarded as just old farm junk.  Unless someone decides to take Angela Merkel’s advice and sell-off yet another piece of Greek history.  Sadly, that has already happened on Nisyros with the remains of the castle at Emborios being redeveloped by rich incomers, obliterating what was left of the original.  Apparently, the same fate is now befalling the fortified monastery of Siones where the 17th century frescoes in the church have been hacked off.

I plan to revisit this house again and do a better job of recording what’s there.

But here’s a taste of what it’s like inside. 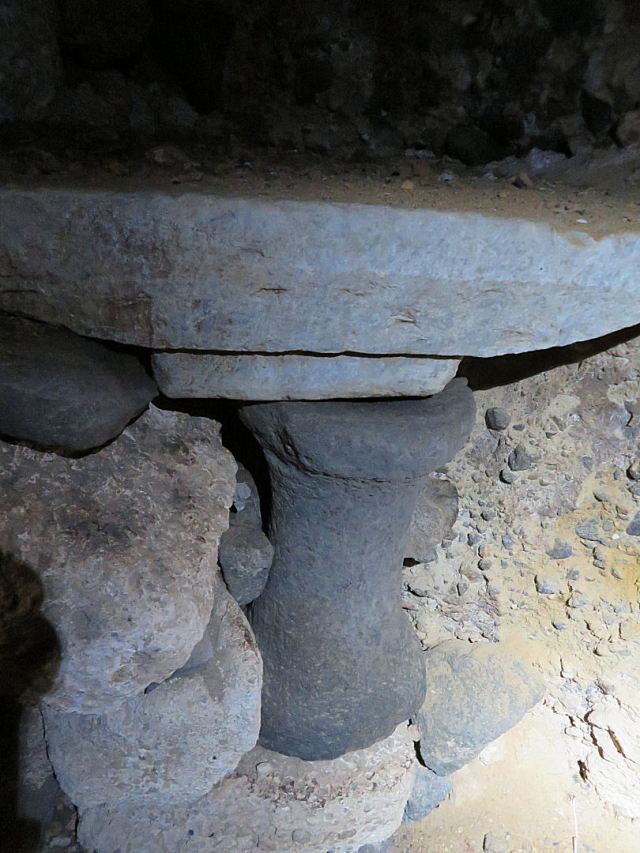