Greece, Symi: The satisfaction of discovering. And undiscovering

After a brief sojourn on Nisyros, back to Symi, revisiting familiar and looking for new places.  There is great satisfaction in discovering new places.  But that’s ‘discovering’ in the sense that Columbus discovered America.  It was already there, complete with people, who Canadians call the ‘First Nation’.  America was also already ‘discovered’ by the Vikings.  And over the centuries the Inuit sometimes got blown off-course in their sea kayaks and ended up a lot further south than they planned.

So, just like Columbus, it is patently obvious that I didn’t ‘discover’ anywhere on Symi.  The best I can claim is that I rediscovered them, though even that may be gilding the lily because the local farmer knows they are there and periodically visit.  Empty cartridge cases also show that hunters regularly go (in the hunting season obviously) to off-piste parts of the island no-one else visits.

This is about a trek I do, partly on established paths and kalderimia, partly off-piste to rediscovered places.

Set out through the winding alleys of Horio and out of the village onto the kalderimi leading up to ‘The Viewpoint’ Walk 1 of Greek Island Walks. After stopping to take in the stunning view down to the main harbour and over Pedi Bay, continue upwards on the kalderimi towards the tiny church of Agia Paraskevi (Photograph 4 of Walk 2).  Now that the damage of the November 2017 flood has been repaired, the church is open once again.  Take a moment to pop in and look at the icons of the eponymous saint, she who plucked out her eyes because her great beauty got in the way of her devotion to God so she disfigured herself.

A short distance after the church is a ‘new’ house on the left.  From here, the old kalderimi has been bulldozed and paved to provide vehicular access.  After a few yards a dirt path goes off to the right, winding attractively if somewhat unevenly up to the tarmac road above the army base.

There are a couple of ways onwards from here depending on how much tarmac you want to walk, but those options are for another blog and maybe a route on Greek Island Walks.  The route I follow (see the Relive video) avoids the tarmac for all except about 20 yards but is very rough and difficult to identify, especially after the flood. It winds its way down to an ancient stone olive press at GPS coordinate N36:36:57.3732, E27:48:38.4946. 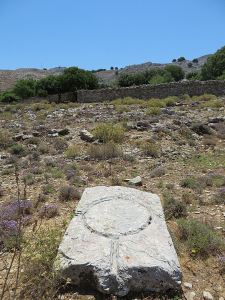 A path leads via the top of the Nimborios gorge and then rises to the church of Agios Dimitris where all the options meet.  Take a break here, it’s the last shade you will get for the rest of the trek.

From Ag. Dimitris the looping bends in the bulldozed track can be cut, joining the remains of the path down to Toli beach, before re-joining the track at a much lower level.

To this point It has been fairly tiring because of the terrain and the distance covered, especially in the heat of the day, but here is where the interesting stuff begins.  If you hire a vehicle you can drive this far.  You will have missed an interesting walk but conserved energy for the strenuous bit ahead.

Soon after joining the bulldozed track down to the beach there is a bench by a wooden electricity pole at N36:37:15.3552, E27:48:10.7812.  Look carefully down and there is the unmistakeable outline of a large stone construction.  It’s built from the stone of the immediate locality and so unless you look for it, it simply merges into the rock-and-scrub background.  Once spotted, it’s unmistakeable. I spotted it a few years ago having passed it on numerous occasions previously, and scrambled down to check it out.  In that narrow sense, I ‘discovered’ it. 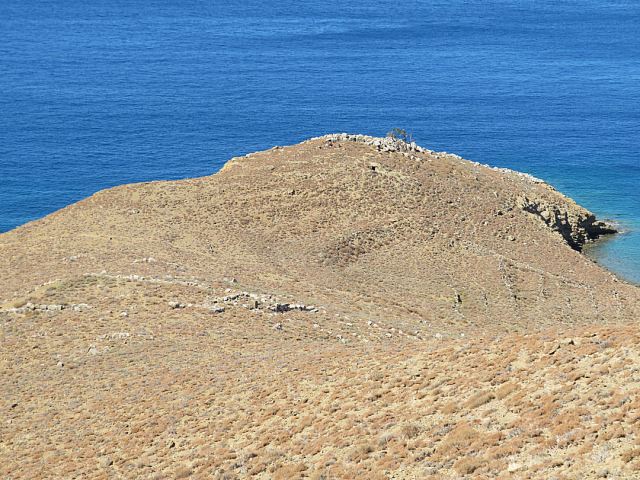 To get to it, it’s necessary to first of all scramble down the loose rubble bulldozed over the edge.  There is the thin remnant of a path just about discernible lower down the slope leading to one of the two entrances to the fortress at N36:37:13.9709, E27:48:04.2211.

The fortress, which I call Kato (Lower) Toli, is 36 metres by 20 metres and constructed of large stone blocks, once higher but now 2 metres high on the up-slope side, 3 metres on the lower side closest to the sea.  The seaward wall is a retaining wall, levelling the site.  It doesn’t command views of the sea because it’s deliberately located behind a small hillock which would have hidden it from view of approaching piratical craft.  The main entrance to the fortification is part way along one of the shorter sides, flanked by large portal-stones, the right-hand side when facing the sea. 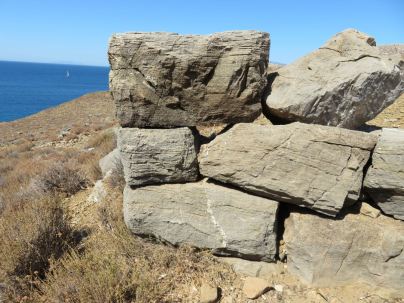 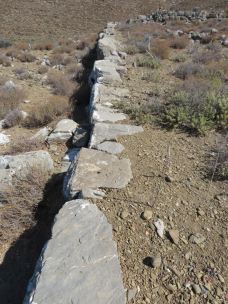 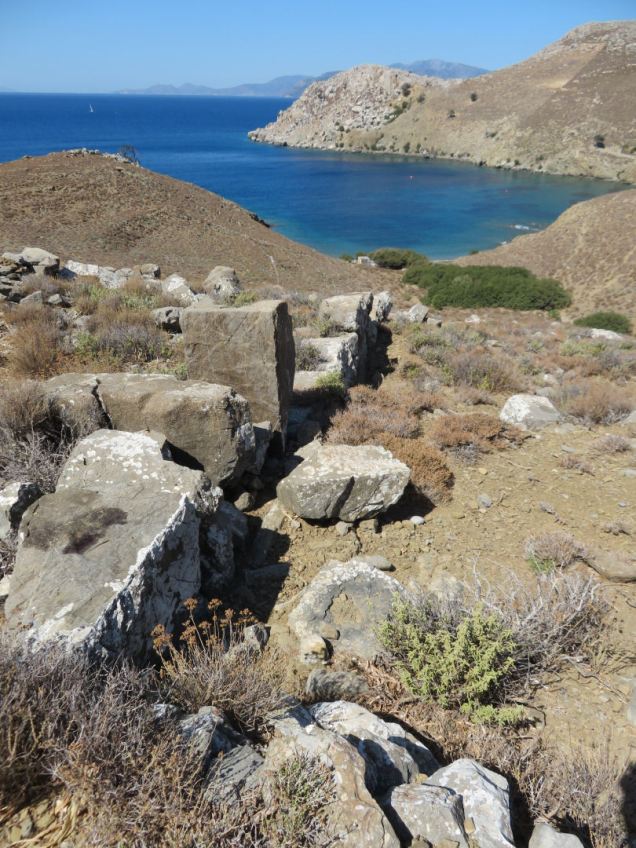 It’s a steep climb back up to the track by the bench but an alternative is to take the vestigial path a short distance until it intersects a well-trodden goat path going leftward. This traverses the slope, crossing a shallow dry gully which offers an easier route back to the track, if you prefer rock-scrambling rather than slithering up loose gravelly soil.

One of the many lines through the vegetation is an old pathway judging by the terracotta shards on the way up.  Getting closer to the top the pathway becomes clearer and leads directly to another fortification at N36:37:28.4059, E27:48:07.4381.  I ‘discovered’ this one from Google Earth.  Particularly when I go ‘off-piste’, I plot my routes using a tracker on my phone and then look at the line afterwards.  On this occasion I noticed a feature which had straighter lines than was likely to occur naturally off to the side.  Next day I went to check it out and found another fortification.

I call this one Pano (Upper) Toli.  It’s also made from huge blocks of very local stone and so merges into surrounding rock.  Knowing it’s there, it can be seen from a couple of points on the bulldozed track to Toli but at a casual glance it looks to be just a part to the limestone crags high above.

This one is also 36 metres by 20 metres with the main entrance along one of the shorter sides, again the right-hand side when facing the sea.  Coincidence or significant?  The right -hand corner of the fortification is nearly 2 metres high and there are many similarly large blocks nearby so presumably the wall was once a good bit higher.

There are hundreds of terracotta sherds within the site, best I leave all in situ against the faint possibility that at some point it may be examined by trained archaeologists rather than enthusiastic amateurs like me.  It would be interesting to have them ‘aged’.

However, most strikingly within the fortification are two large ‘artefacts’.  One is a very precisely cut stone about a metre long, half a meter wide and 25cms thick.  There is a similar one built into the perimeter wall of a settlement below Agios Nikolaos Stenou near the Kokkinohoma area of the island but that one has a number sprayed on it in red so has obviously been recorded, presumably by or on behalf of the Greek Archaeological Service.  This one is unmarked so presumably not recorded.

I have a theory that such stones were cherished by local communities, regarded as talismanic, a link to the glories of Greece’s Classical or Hellenistic past. I have found collections of them, distinctly different from everything else, in hidden and subterranean locations on Nisyros  I’m sure archaeologists have a more scientific explanation.

The other large artefact I can locate rather more accurately. It’s a fragment of a stone basin carved out of basalt, deriving from Nisyros.  I can be sure of this because there is no such geology on Symi and there are many similar pieces on Nisyros where the rock is found in abundance.  Evidence of inter-island trading. 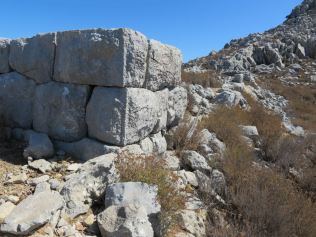 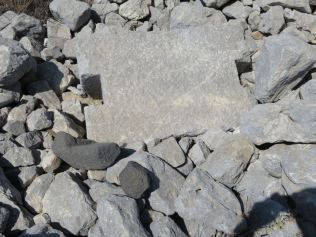 Continuing beyond the Pano Toli fortification is a hidden valley which has no obvious drainage outlet, unlike normal valleys. Investigation shows it draining into a cave at the lowest point.  There are two areas of flat field within the valley which I guess were formed by channelling floodwater-borne-sediment.  There are signs of an ancient dwelling.

A friend and I plan to explore the cave next year.  It’s a fault-cave, caused by rock movement along a fault line.  With limited amount of water flow there is little likelihood of water erosion passageway.  In all probability, supported by comments from someone who lived in the area as a youngster, and exploration of the ‘Wendy Cave’ with a caving friend in 2014, I suspect that rock-fall has blocked it.   But we have to look.  There are two openings close together, either or neither of which may ‘go’.

The route I took back to Yialos is via this valley and the path around to Agios Nikolaos Stenou, then down onto Nimborio.  It’s shown on the ‘Relive’ video but would tax readers’ tolerance beyond breaking point if I continued this blog post even further.  So, I’ll describe that part of the trek another time.

But before I finish, a brief further word about the conceit of ‘discovering’ places.  As I said in the introduction to this blog, it’s not really discovering because these places were already known.  In the case of the fortifications they were built by people. There are genuine discoveries, most notably by cavers and divers who go where no-one has been before.  I envy them.

But I envy more those few who ’undiscover’ places.  Most notable and, the cause of great envy on my part, is the ‘undiscovery’ of Sandy Island by a team of Australian oceanographers which included a friend of my daughter and her husband.  He actually stayed in our house!!!!!  The island has been shown on admiralty charts for over a century.  It was even shown on Google Earth.  But it doesn’t exist.  Never has.  It’s supposed to be where there is nothing but deep ocean.  It could never have been there.

Undiscovery, now that’s a real achievement.  A challenge for my next visit to Greece.  What can be undicovered on an island with millennia of history ‽‽

However, there may be an opportunity for genuine discovery.  A friend has found the entrance to a large cave.  We plan to go back next year and investigate that as well.  Far more promising! That could be a real discovery.  But not as unique and satisfying as an undiscovery.