There is a certain smug satisfaction in casually dropping into conversation in the taverna over an end-of-trek beer  “I walked across the island today”.  OK, so on a small island like Symi it’s not exactly Wainwright’s 192-mile epic but it sounds good. Even if you don’t mention it to anyone it’s still very pleasing to do.

The walk to Lapathos Beach below the tiny edge-of-cliff monastery of Agios Vasilios though only 3 miles each way, is indeed across the island from the east to the west coast, climbing to the main ridge dropping down to sea level and then back again.  It’s a great trek, though hot work on the return leg in mid-summer and the final section to the beach is not for the trepid.

The climb to the ridge is on an old kalderimi with memorable (and a string of cliché superlatives) views down to the harbour and over Pedi Bay.  It reaches The Tarmac at 275 metres and crosses it to wind down through the once-agricultural, now increasingly urban, village of Ksisos before diving between chain link fences and onto an unspoiled mountain path.  You have to put up with the snarling, aggressive dog on the one side until you reach the end of the enclosed land but pick up a rock and pretend to be prepared to throw it and the dog skulks off silently.

The narrow but very clear path flanks increasingly high above the Vasilios Gorge, the bed of which drops rapidly down.   The mountainside here is covered in sage, at the end of April and early May in flower and buzzing with bees.  Brush against it, as inevitably you must, and the air becomes fragrant.  It is a characteristic of Symi that some mountainsides are covered in sage, others in oregano and others in thyme.  The sage flowers earliest in spring, then the oregano and then towards the end of May and into June, the thyme.  Some areas have both sage and oregano but mostly it is one or the other.

close up of the cavernous invitation to the bees 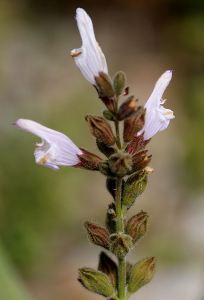 Paying careful attention to where you put your feet has its rewards. I spotted what looked like a larger than usual bright green leaf or seed pod but which, on closer examination, turned out to be a 6-7 cm long mantis.  It’s easy to see where old science fiction films got their inspiration for aliens.

At first glance it looks like a large seed pod 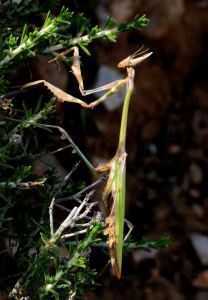 I think it’s native to the planet Earth but ……?

When Lapathos beach first comes into view the buzz of pollen-gathering is silenced by the buzz of anticipation in the brain.  Soon the path veers rightward to cross the top of a deep, steep sided-gully and then it reaches a cliffed edge where the gorge goes dramatically and impenetrably off to the left and the trail picks its way through sharp limestone rocks straight ahead towards the coast.  Narrower and in places more difficult to follow now, the route is marked by stones cairns, some more artistically built than others.

Looking down the Vasilios Gorge towards Lapathos Beach 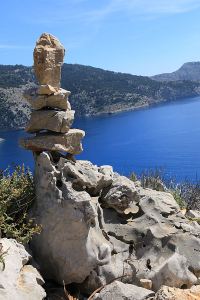 One of the more artistic cairns

Eventually the gradual meandering descent reaches the edge of the cliffs above the diminutive monastery of Agios Vasilios, a photo of which graces the cover of the SKAÏ map of the island.

The onward route to the beach some 65 metres below, precipitously hugs the edge of the cliff for a few metres and then drops near-vertically down a rocky gully.  Sharp limestone means there is no problem with getting a grip underfoot but care is needed to avoid abrasions and cuts.  Then at the base of a high but shallow cave the path becomes very loose.  Though it had  started to compact slightly over recent years the heavy rains of last winter have caused erosion and it is once again scree so care is needed to avoid sliding on one’s Londonderry Air (pardon my French).

The final slither to the pebbly beach and a cooling swim is welcome.

West facing beaches accumulate more flotsam and jetsam than those on the east and for some reason this year there seems to be inordinately large amounts of bamboo washed up.  Crossing over that and the beach profile rises from a 6-inch tidal range (a marvel to those of us used to the range of up to 50-foot along the South Wales coast) to cypress woodland behind and about 5 or 6 metres higher which offers welcome shade from the midday sun.  The beach material is mostly pebbles though with patches of rounded gravel and course sand, ideal for slouching on to dry in the sun after a swim, unless you perch on the mermaid rock by the water’s edge.  The mermaid has yet to put in an appearance but I’m optimistic and wait patiently.

Lapathos is an isolated beach, only reachable on foot or by boat, part of its appeal.  Until the main tourist season begins there are no boat trips so you can have it to yourself.  Very liberating.  But there is a surprise here in Spring.  There are dramatically colourful flowering plants over much of the island at this time of year but here on the beach, a truly desert environment, there are tiny plants dotted around in the gravel and between the rocks. At most 2 or 3 cms high they could not be described as dramatic but are testimony to the power of survival under the most adverse conditions.  I struggled to photograph them without a macro lens. 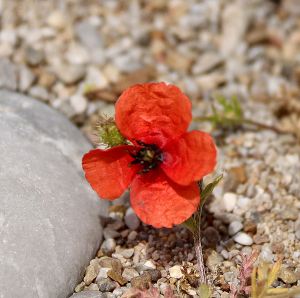 A poppy dwarfed by the arid conditions 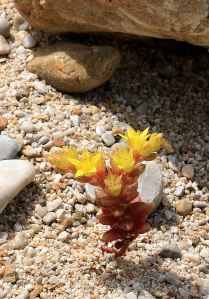 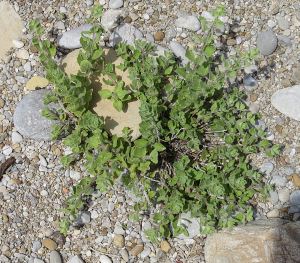 At the back of the beach and at the foot of a towering, vertical cliff is a permanent pond.  Fenced off by rickety chain link fence in a small enclosure, the sides stone-walled and stepped to allow access to goats, the water level barely seems to vary through the summer.  But one thing is clear.  The water level is about 2 metres below that of the beach above with its population of tiny plants.  How do they survive?

The cliff towering vertically up at the back of the beach 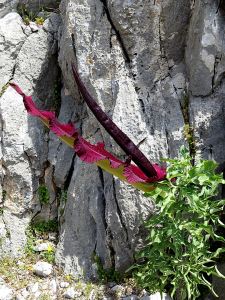 At the base of the cliff and close to the pond, one large Dragon Arum

(The route is described on Walk 2 under ‘Symi’ of the Greek Island Walks page of the blog or click here, with the route through the labyrinthine alleys of Horio onto the kalderimi described in Walk 1 click here).

2 Responses to Symi: coast to coast