Symi: the island in colour

Most visitors to Symi come in the summer months. During the day they lie sweating in the sun coated in Factor 50 and then, showered and perfumed, in the evening sashay to the taverna or restaurant of choice.  And have a great time.

The impression they gain is of an island completely dry and barren, a hot rock of dazzling limestone crags and parched ground, the majority of the vegetation brown and crisp. Apart from the cypress woodland only the oregano, sage and thyme, all unpalatable to the goats add colour, and by the end of August even these herbs are crisping up.  I first visited Symi during August and trekking in the mountains this was very much how the island seemed.  And I loved it.

Now I come in the early Spring when by contrast the island is greener, a backdrop to the wide variety and large number of flowering plants  ……. with few visitors to appreciate the colour.  Always welcoming, local people seem to have an even warmer welcome for the those breaking the mould of package tourism and travel independently in early season.

The rewards are stunning for those interested in the natural world, with an eye for flora and fauna.

I go walking every day. Most of the treks I have been on in the mountains on Symi so far this year have been at a relatively slow pace for me. This is partly an inevitable consequence of needing to build up stamina after 2 months of relative inactivity following skiing in Canada and partly to acclimatize to the heat of the Southern Aegean.  However, to a large extent it has also been because of the constant distraction of stopping to photograph plants and wildlife.

I’m not a professional photographer.  I’m an outdoors person who takes photos not a photographer who goes out walking and climbing to get my shots.  Nor am  I a botanist. My interest in flowering plants is aesthetic not botanical.  I try to find out names of what I’m looking at but with limited availability of expertise to call on there are many I don’t know.

This interest will have been evident from the blogs I have posted so far.  But I can’t keep up the writing because my passion is being out there doing things not writing about it.

To give an impression of what the island is like in full spring colour, I have pulled together some of the photos of flowering plants which I saw during April and not yet included in the blog.  This is by no means a comprehensive picture of all that there is.  Some  flowers are individually so small that to do them justice a macro lens would be needed.  Others I have an irrational aversion to.  For example, for some reason I haven’t taken any photos of the prolific yellow flowered Jerusalem Sage even though it would be easy to do so..  Maybe it’s the fact that it isn’t a sage at all  and doesn’t have aromatic foliage, or just that its habit is sprawling and unappealing.   Nor have I included photos of the plants I took on a walk to Agios Vasilios beach on the far side of the island.  Because they are so different from anything else I’ll include a separate post for them

I’ll also add a post of the many plants still in flower in May.  Different locations, north or south facing aspects, different altitudes or soil types, relative amounts of moisture in the ground can mean that  plants of the same species may be in flower a month apart.  Others are just appearing.

The more I go off the beaten track and wander the mountain the more I’m amazed by the richness of the flora of the island and the broad palette  of colours. 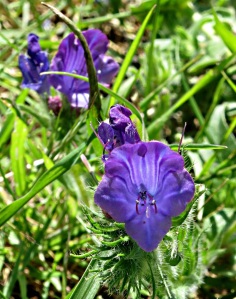 Pyramid orchids high on a ridge above Pedi Bay 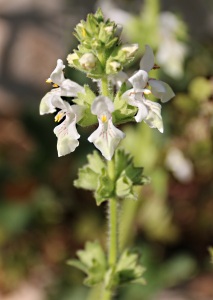 in colours ranging from white to deep pink, each stem up to a metre tall

I know this as a ‘House Leek’, this one a variety possibly specific to Symi 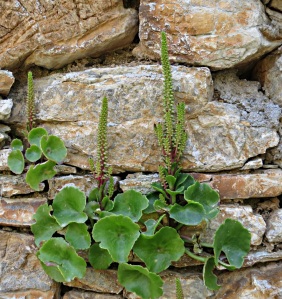 … and I know this as Wall Hyacinth

One of the many plants I don’t know 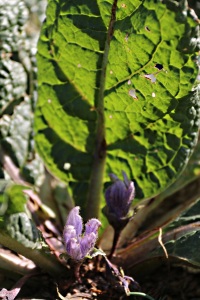 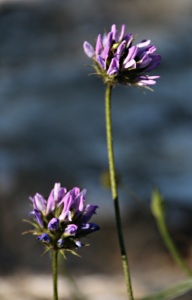 Apparently called Bitumen Clover, so called because when crushed in the hand the leaves smell of …. 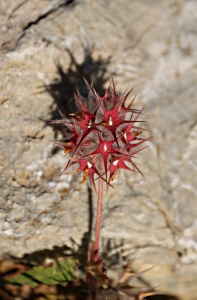 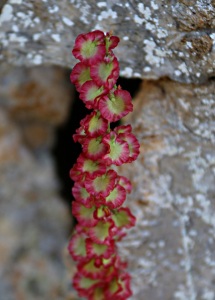 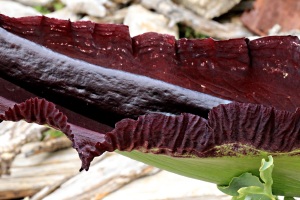 Detail of Dragon Arum, this spathe was over 70cms long

Pink poppy, common in garden centres but rarely found in the wild.

Two of the most flamboyant plants in April on Symi, Crown Daisies and poppies

Growing out of small gaps between rocks, each flower about 5-10 cms across, but again no idea what they are called 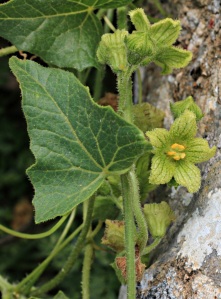 Star of Bethlehem, this one with a green strip in the centre of each petal

I found this little fellow in the kitchen sink when I went down to make breakfast.  Dropped in and couldn’t climb out. Known as a Turkish Kecko or Mediterranean House Kecko.. Just wide eyed innocence.  I relocated it into the avli (courtyard).

“What do you mean I’ve got my intestines hanging around my neck …. ?” 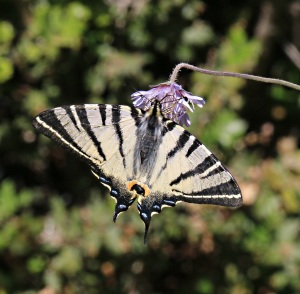 Inside the walls of a monastery and protected from the goats, tall grasses and Tassel Hyacinths

Campanula growing out of a crag 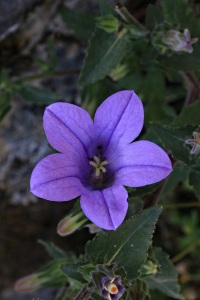 Finally, on the edge ….. contemplating Life, The Universe and Everything

1 Response to Symi: the island in colour