Symi: a trek beyond the economic fringe

The deserted village of Gria set in limestone crags high above Pedi Bay has fascinated me ever since first ‘discovering’ it 15 years ago.  The fact that it has a permanent pond, seemingly lost not only to sight but to memory judging by the number of times I have heard the refrain ‘Symi has no surface water’, has always been an added attraction.  I walk there regularly, sit and munch a banana and watch the wildlife.

The first part of the route from the top end of Horio and onwards from the Agia Marina cemetery is along a now-concreted track much of it bordered closely on the downhill side by 2-metre high chain-link fence.  In Spring there is a marked contrast between the fenced and the unfenced land.  The latter is stripped bare by foraging feral goats, vegetation confined to oregano now ready to burst bud, Dragon Arums unfurling everywhere, and the drooping yellow foliage of last Autumn’s stately squill.  By contrast, behind the fences are Crown Daisies in their million, tall grasses and wild cereals, yellow headed Vipers Grass (which is neither a grass nor anything to do with vipers), spindly cornflowers, opulent pink convolvulus, the red splash of poppies, occasional wild gladiolus, and great yellow cushions of Greek Spiny Spurge, the bright yellow flower-heads hiding a vicious mesh of needle-sharp spines.

Looking across Vipers Grass, convolvulus to the Pedi Valley, windmills above Horio …. and turkey beyond

At the end of the track the monastery of Zoodohou Pighis Vrisi marks the edge of civilisation.  Small annual festivals are held here on 17 April and the walled gardens are carefully and regularly tended, no chemicals used only manure and compost.  The spring which emerges from a gated cave behind the buildings and which gave the monastery its name as well as its location, is used to water the gardens and is piped to a tap in the courtyard.  It’s also piped to Horio in 6-inch diameter black polyethylene draped on the surface alongside the track thus ensuring that it is heated by the time it comes out of the cold taps in the village and is completely undrinkable .

The monastery of Zoodohou Pighis and its magnificent walled vegetable garden

From the monastery the route is along a narrow, unclear trail through rocks, in places with a near vertical drop into the gullys below.  Not a path for anyone with vertigo but one of my favourites.  Little chance to look around you here, need to watch every footfall but this is rewarded with sight of lizards darting out of the way and the occasional chance encounter with something else. 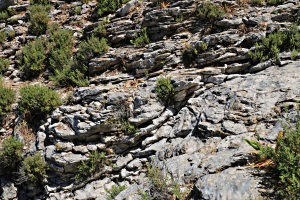 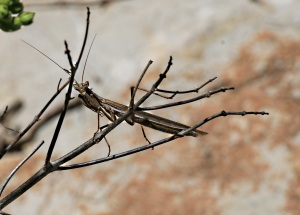 A 2 inch long mantis giving me the eye. I spotted its shadow on the rock

At first sight the settlement is completely abandoned.  The red-tiled roofs of small one-room stone-built houses collapsing.  Saddest is the  sight of fig trees which 15 years ago we picked figs from, now disintegrating back into the ground.  The terraced fields within the stone-walled enclosures are bare save for oregano and Roman Nettle, goats resorting to eating the mandrake leaves.

However two of the houses are still intact, doors padlocked and I suppose used by local farmers when they come to slaughter a goat or tend the few beehives.  The beehives are in a small fenced-off field at the lowest point with fairly lush vegetation, maybe because they are at the same level as the pond and so get more moisture, certainly exclusion of the goats helps.

But this is very much an agricultural settlement beyond the edge of modern Europe.  Always at the margins, climate change rendered it agriculturally untenable decades ago and aspiration to modern conveniences and services puts it way beyond acceptable 21st Century living standards. The occasional day-visit is now its lot.

Under similar climatic circumstances the people of Micro Horio on Tilos voted (in 1956 if I remember correctly) to abandon their village and left en masse.  It’s an amazing abandoned place, stone husks of a once thriving community, but it’s starting to rediscover itself.  It has the island’s only nightclub – no-one around to complain about the noise.  The church is still maintained.  It has Byzantine chapels.  A few of the houses are being renovated.  This is possible because it has road access and a car park.  Gria will only ever be accessible by a difficult rocky path.

One cheerful vestige of Gria’s past is the bright green of a mulberry tree outside one of the intact houses, considerably stunted but this year bearing fruit 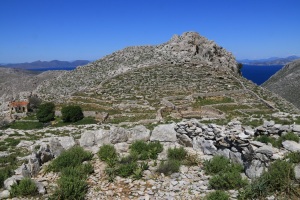 The abandoned house within the enclosure

….. with a magnificent clump of convolvulus outside 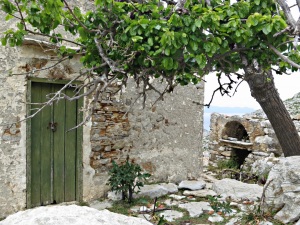 Fruit on the mulberry

Over the last few years the water level in the pond has been dropping alarmingly.  October 2014 it was the lowest I have seen it, reduced to a small area with mud-flats at the side and what looked like the opening of a cave system below water level.  This is likely given that there is no way that the pond is maintained by surface run-off.  My guess is that the aquifer which feeds it originates in Turkey, just across the narrow channel.  This may be supported by the fact that this year the water level continued to rise after 2 weeks without rain on Symi.

It is now at the level I remember it 15 years ago, with photos of my wife sitting at the water’s edge.  The water level is much higher than this time last year but there is as yet little sign of animal life. The occasional Red Darter settles on the rocks, a lone blue dragonfly buzzes around defying attempts to photograph it.  No sign of the frogs, or the rats or the Black Rat Snake I photographed last year. 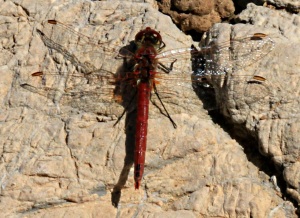 The ground around the edge of the pond is arid but still manages to support a pyramid orchid in full flower and tiny snap-dragon type flowers I haven’t seen before.

Each flower about 3-4 mm

I choose a different way back to Horio, dropping down to the walled Drakos Ancient Edifice. It is a route I walked once many years ago and swore never to use again. Passing below the high walls of the Drakos Fortification, capped by cyclamen and poppies, the ground is dense with aggressive thistles of all descriptions.  It may be OK in wellington boots but sandals require considerable care and progress is very slow.  I wondered if the main defence was the vegetation not the stone walls.

The sun behind old poppies on a wall 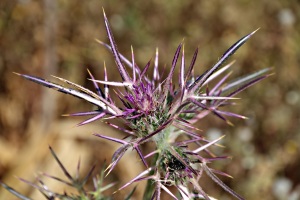 Colourful, attractive …. but no less sharp

However, once passed the thistles, progress slowed even more on the path along the valley side.  First I spot a couple of tongue orchids and then a diminutive Holy Orchid – and then more and more.  In all I spotted 15 of the latter, all but invisible until their flowers open and then eye-catching.  The discomfort of the thistles was forgotten.

…. variations of colour and shading 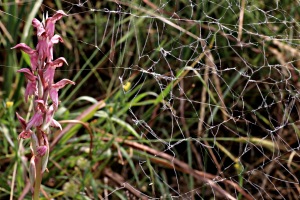 …. used by a spider as an anchor for chaotic web 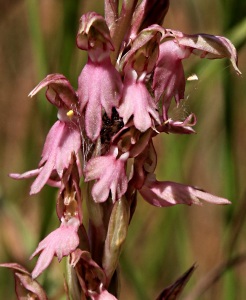 …. another spider spins its web over the flowers and hides inside 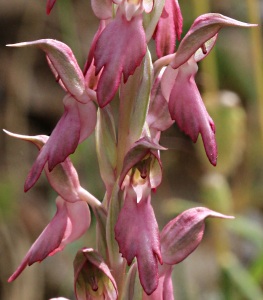 Close up of the flowers

4 Responses to Symi: a trek beyond the economic fringe