Metsovo: taking bananas for a walk in the Pindus

The rain had stopped by the time I got up on Friday morning, the cloud had lifted to just above the tops of the mountains and there were growing patches of blue sky.  The optimism about the improving weather had proved justified.

After breakfast I ambled down to the town centre, partly to look at it when it was ‘t raining and partly to find some bananas to take for a walk.  I find that bananas are never happier than when being taken for a walk in the mountains.

Surprisingly, they proved difficult to track down.  Much of the town centre is taken up with hotels, restaurants, tavernas and bakeries with shopping seemingly dominated by the regions specialties of carved wood products and cheeses.  One double-fronted shop caught the eye as being very different not only from all others in the town but from any I have seen anywhere.  It seemed to be the entire contents of house clearances across Northern Greece 50+ years ago and sent through a time portal to this shop.  It reminded me of the shop opened by Gary Sparrow played by Nicholas Lyndhurst in the TV series ‘Goodnight Sweetheart’, only a lot more random.

One of two unique shop fronts. 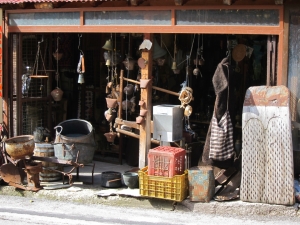 Alongside it, the other.

Eventually I tracked down bananas in a great little fruit shop in a back street behind the church and the main square at the bottom end of town.  It was interesting seeing the the traditional random-stone slate roofs compared with the newer, and presumably cheaper, red pantiles and corrugated iron of most of the town. 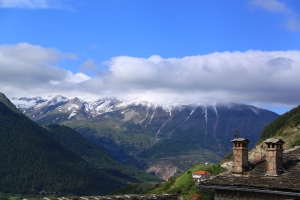 One of those roofs

The plan was to find and follow footpath P3 shown on the diagrammatic map which the owner of the hotel kindly gave me.  A perfunctory hunt for a bookshop to try to find a better map completely failed so, as has been the case in so many places I have walked in Greece, I used what was available.  I found a path of sorts which took me up to the top of the ‘teleferik’ ski lift at about 350 metres above the town.  Ski lifts are not usually associated with Greece but here in the Pindus they are part of winter life and important for the town’s economy.

At the top of the chairlift

Up from the valley below …. but not in Summer

From there picked up the path I was looking for, marked at random intervals by plaques about 10 inches square saying ‘P3’ and nailed to trees.  Indeed, much of the path was in trees, opening out occasionally to reveal dramatic views up to the highest peaks with a covering of snow and down to the valley floor and the massive viaducts connecting the tunnels of the new motorway.

There were gaps in the clouds periodically but even with the sun shining the wind and the high altitude made it very cold.  Relying on multi-layering to keep warm just about worked and for the first time in Greece I did a walk wearing long trousers and shoes but I would have been much more comfortable and therefore more confident about committing myself had I had more appropriate clothing which I left at home.  At altitude in the Pindus Mountains in May is not a place to be in summer-weight clothes even with two ‘T’ shirts on.  Nevertheless I covered about 16 kilometres (10 miles).

The landscape was similar to alpine forests and meadows with lots of flowers swathed across pastures.  Quite spectacularly there were also numbers of orchids scattered here and there.  Much of the forest was hardwood, especially beech in contrast with the planes of Meteora.  Some of the beech was ancient and in places the walking reminded me very much of the flank of the ridge north from Pontypool to Abergavenny, though at considerably higher altitude.

Flower-covered meadows between the trees

One of many orchids 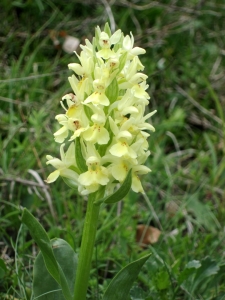 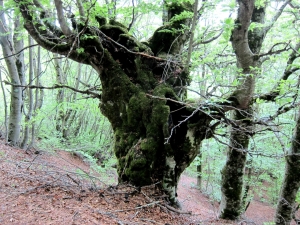 I got back to town about 16.15 and felt I had earned a coffee and cake so I slobbed out in a café for half an hour.  Very touristy and decadent.  Slackness like that could ruin my reputation!

1 Response to Metsovo: taking bananas for a walk in the Pindus