Meteora to Metsovo: and a touch of déjà vue

Moderately early start to Thursday in order to catch the express bus to the next place on my itinerary, Metsovo in the Pindus Mountains at an altitude of about 1200 metres..

Usual morning ablutions; finished packing; breakfast at 07.30 instead of the usual start-time of 08.00; pre-arranged taxi arrived at 08.30 for the short trip to the KTEL bus station in Kalabaka.  There was then a standing around in the office which served as a bus station waiting room, ticket office and parcel delivery/collection centre, two buses just parked up in the middle of the wide street outside with cars parked higgledy-piggledy all around.  More people came and waited, more parcels arrived.  And then a third bus arrived, the one that we were all waiting for.  The driver and a guy I took to be his mate supervised the loading of Big Bags and we were on our way.

The bus wound its way gradually, laboriously into the mountains, taking hairpin bends slowly, stopping periodically in unlikely spots to let someone on or off.  At one point a guy got on the bus in the middle of nowhere, using the centre door, and the driver’s mate ambled up the aisle to take his money and dispense a ticket.  Most of us had bought tickets in the bus station before setting out.  All very laid back and leisurely as befits Greece.

The sun was shining during the first part of the 1½ hour journey but the mountains in the distance were shrouded in cloud, revealing patches of snow at higher levels as the clouds drifted aside for a few minutes before settling back once more.

Batting along in the bus in the sunshine, cloud low on the mountains ahead

The old road between Kalabaka and Ioannina is said to be very spectacular but is now little used.  Instead a recently opened dual carriageway, the E2 ‘Odos Egnatia’, tunnels through ridges and crosses valleys on huge viaducts, speeding up the whole journey.

Then in the space of 5 minutes the day took a sudden and unexpected turn. The bus left the motorway at an exit signed to Metsovo, went a couple of hundred metres, turned around and stopped.  The driver shouted that this was Metsovo so I grabbed my things and shot off, retrieving my Big Bag from the outside ‘hold’.

It very clearly wasn’t Metsovo. It wasn’t anywhere.  It was a motorway exit with no development of any kind in sight.  Two nuns and the driver’s mate had also got off.  The nuns got into a waiting car and puttered away and as the driver climbed back on board he shouted that the guy I had taken to be his mate was waiting for a car and they agreed that that would also pick me up.  I went from complacency to confusion in less than 2 minutes.  What on earth was going on???

Chatting to the guy in  a mixture of Greek and English I pieced it together.  On some days and at some times the bus goes into Metsovo but not the 08.50 from Kalabaka on Thursdays.  Instead it stops at the motorway exit, about 5 or 6 kilometres from the town.  Why had no-one thought to mention this when I bought my ticket?  Perhaps the lass who sold it to me didn’t know?  Furthermore I found out that the guy wasn’t the driver’s mate but a policeman on his way to do a 24 hour shift in Metsovo which he did once a week and the car he was waiting for was a police car.  But no problem, I could have a lift.

Without the serendipity of being on the bus with that guy I would have been completely stuffed.  There was no-one to ask where Metsovo was and which of the road options led there, no phone number to call a taxi, no information of any kind.

The air up in the mountains was significantly colder than down in Kalabaka but at least it wasn’t raining. Two minutes later it started to spit with rain and the cloud level dropped dramatically.  The guy led me around the other side of the big lorry parked up  where the bus had stopped and into a massive log-built bus shelter.  Another minute and the mountain opposite, previously shrouded in cloud, had disappeared completely as it lashed down with rain and the thunder crashed around overhead.

Cowering in the log-built bus shelter, rain lashing down outside and the mountains all but disappeared.

Ten minutes of cowering in the log cabin and the police 4×4 arrived and we dashed through the rain to get in.  Ten more minutes and it stopped outside the hotel I was heading for, rain still absolutely lashing down, the sides of the steep main road in the town a rushing torrent.  First time I have been delivered to a hotel by police car!!  Am I glad that I had taken the trouble to suss out a hotel on the internet and e-mail ahead.  I would not have fancied trying to find somewhere suitable in this weather lumbering around loaded with baggage.  It was cold outside but  the welcome was warm.

Déjà vue?  In the first blog post when I arrived in Athens I wrote “When I left Grey Britain it was cold, wet and grey.  Very cold, wet and grey.”  Believe me, it’s colder, wetter and greyer here in the Pindus Mountains.  It reminded me of going to the Lake District with the scouts when I was a teenager and having to take on trust that there were mountains there.  I literally saw no mountain tops any of the times I went.  It was many years later when I went back that I found that they were not a myth.  Thursday and it was the same here.  At one point the cloud lifted slightly so I can see across the valley at the height of the hotel but have no idea what the mountains look like, except for the occasional glimpse of the snow which fell today. 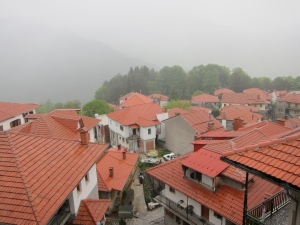 The temperature in town was 5oC at 15.00.  This being a ski resort locals are all going around town wearing ski jackets or similar.  Inside they are all wearing thick sweaters or fleeces.  I had thought to bring a thin fleece but didn’t.  Instead I decided to rely on multi-layering.  A mistake.  I have no long sleeves to wear inside the hotel and only a thin windproof to wear outside.  However, I do have a pair of walking shoes without which it would be very unpleasant.  First time I have brought shoes to Greece!!!  Previously I have only brought sandals.

After hanging around the hotel for a while hoping for the rain to stop and the sky to clear,  I ventured out for  a walk to get the feel of the place.  I ambled in the rain up to the start of a footpath close to one of the ski lifts, hidden in the cloud.

Ambling up the road from the town gave a view down to one of the viaducts and tunnel entrances of the new motorway far below ….

…. and of the motorway exit where I was dropped off

Metsovo snow plough station: evidence of the amount of snow they get regularly in winter here 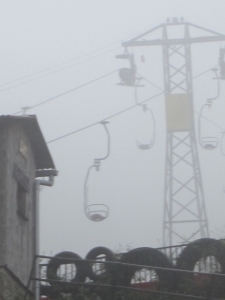 Ski lift in the mist

I got wet and cold and so was very pleased to get back to the hotel and find that a log fire had been lit in the lounge.  I sat in the big comfy armchair next to it, read a book on my Kindle, and dozed.

I’m told that the weather will change tomorrow and that by Monday the temperature will be up around the 30o mark.  I certainly hope so.  There is little point trying to do any walking while the weather is as it is.    This is a far cry from the Greece I know. But then the Greece I know isn’t the only reality and finding and dealing with the unexpected is part of the experience of travelling.