Metsovo:  getting it wrong and a discourse on the nature of paths

Swung the curtains open to the balcony doors Saturday morning and was dazzled by the sun streaming in from a cloudless blue sky.  Weather forecasts on the internet seemed agreed, for once, that it would be a dry, warm day.

So I revised my plan for an amble down by the river and decided to go back up the mountain to take advantage of the much improved conditions.

Yesterday I followed part of footpath P3 which goes up to the top of one of two ski lifts and then to a couple of other high points in the mountains looking west.  Today I decided to follow footpath P2 towards  a large lake North West of the town.

According to the diagrammatic map the footpath begins at the edge of town, about 400 metres from the hotel, easy to find because it starts at the point of  a very pronounced hairpin bend.  Not so.  New apartment blocks and accompanying huge retaining walls seem to have obliterated the path.  It may be there somewhere but I could find no trace of it.  In the UK if development obstructs a public right of way an alternative has to be provided and signposted.  As I have commented on other occasions, in Greece development, road works in particular, frequently sever access to paths with no provision whatever.

But no big deal.  Knowing my inability to find a way out of town I had sussed out an alternative which meant taking another path, not marked on the map but which I located when I got here on Thursday, and then trudging a couple of kilometres up the near deserted top road to the next section of the path.  At the high point of the road a taverna has been built so I sat outside basking in the sunshine and had a mid-morning espresso.  The guy who served me saw I was looking at the map and looking quizzical, so he asked if I was going for a walk and proffered the information that the path began about a kilometre further along the road and was marked by signs.  He also warned me against ‘dangerous dogs’ which roam the area, not a prospect I welcomed having experienced them elsewhere in Greece.

Suitably caffeined-up I trundled on and in about a kilometre reached the other ski lift where I had anticipated the path to be.  There was a cluster of buildings and a track heading off in roughly the right direction so I followed it.  Basically, I got it wrong and found myself on another part of footpath P3.  But not before attracting the attention of a pack of vicious looking dogs which came out barking aggressively from behind a shed.  I did as the guy in the taverna recommended,  picked up a big stick.  They followed me for about  a mile but made no attempt to attack.  Dogs encountered elsewhere in Greece, and there have been many, have all been tied up and thankfully so.

I was irritated by having got it wrong but it was a good walk and I got the satisfaction of getting to the top of the highest peak on the ridge on this side of the valley and working out reasonably accurately where I was and where to go.

It made me think about footpaths and the problems there can be when working from diagrammatic maps.  In the forest the path can be wide, clear and easy to follow but is indistinguishable from forest tracks laid to facilitate access for felling and hauling timber and because the grain of the country is completely masked in trees it is difficult to judge where you are.  There may be a knack to it and if I walked in woodland more often I might find it easier.  I haven’t brought my GPS this time but if I had it would be little use in woodland because the signal is attenuated by the tree canopy and is little use without a geo-referenced map to relate to.

Coming out of the forest onto high level pastureland and the path disappears.  Sometimes the line of it can be made out because there is a line of slightly shorter grass with fewer flowers where the soil has been consistently compacted by the passage of feet.  You can follow this if you are on the line but not infrequently there is no indication at all and you just have to make a guess as to where path goes or scout around at the next edge of forest to find it again.  Over rocky ground the path frequently disappears completely.

The signing of the paths is not very helpful.  The occasional ‘P3’ plaque confirmed that the bit of path I was walking on was the one I want to be on but rarely is there any indication at points where there is a choice to be made or where the path disappears under pasture or over rock.  Waymarking can be difficult, particularly in open pastureland, but solutions can be found.

One satisfaction of the day was that I walked in sandals and shorts.  Very much better.  And to crown it all I got back to town and dived into a coffee shop just as it started to rain.  For the rest of the evening there was a series of ferocious thunderstorms with rain lashing down outside so I was content to sit by the log fire in the lounge and read.

In woodland paths can be quite clear … but it might not be the right path! 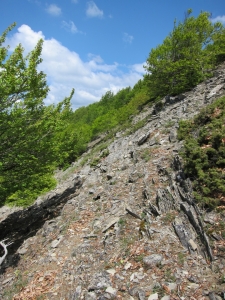 On the ridge top paths disappear over broken, rocky ground

Why a chunk has been cut out of this dead tree with a chain saw is difficult to imagine, but at least the ‘P3’ sign is left in place.

Selective felling within the forest leaves the forest intact, unlike the clear-felling practiced in the UK which is extremely unsightly and destructive of habitats. Not that there is much habitat in the monoculture larch woodland generally planted in the UK.

At the high point on the ridge: a trig point, a weather station, and confirmation that this is path ‘P3’ 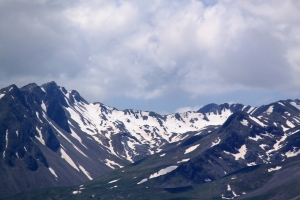 Snow on the North Face of the ridge opposite 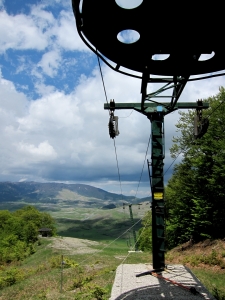 Those who have skied will know that this type of lift is a drag. 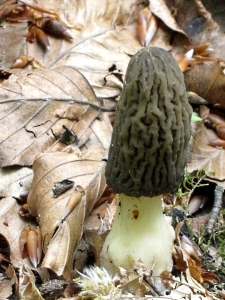 I pick and eat wild fungi at home but wouldn’t touch this with a bargepole. Must look it up in the book. 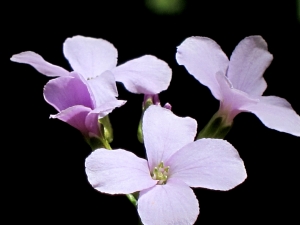 High on top of the ridge 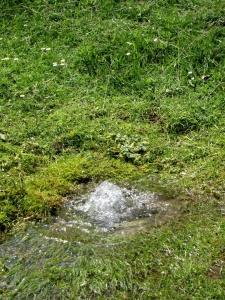 Strange phenomenon, a spring bubbling out of the ground ….

…. which then explodes 2 feet into the air.