Flight back to Rhodes Saturday.  Ferry to Symi early Sunday morning.  A few hours putting the house back to rights after leaving it packed up in a hurry not knowing when, or if, I would return.  Sunday afternoon I took to the hills.

Only a short walk, about five miles, but it was intoxicating.  When you face the possibility that something you deeply enjoy may be taken away from you, the pleasure you get when you return to it is greater than before.  I wasn’t exactly skipping along bellowing the ditty from The Sound of Music but there was a bounce in my step and I was more than ever aware of my surroundings.

First up through the shade of the narrow, twisty alleys of Horio between old houses many damaged by war and left derelict as the owners emigrated to the USA or Australia.  Some survive intact and still afford the basic standards of maybe a century ago to the elderly of the village who have lived in them all their lives.  Increasing numbers are being renovated to modern standards, often for renting out to visitors.  Access up these alleys is tortuous, furniture must be built in the home or arrive in flat packs.  You find your way around by making mistakes and getting lost.

Extension cables stretch from house to house to provide power for tools until connection to the island’s grid.  Black plastic pipes are draped everywhere carrying water supply, a reminder that what is going to come out of the tap is hot enough to shower in, heated by 40 degree summer sunshine and definitely not for drinking.

Then, as so often, out of the village, onto steps leading up to The Viewpoint and a pause to soak in the panorama.

The route from here is a variety of kalderimia (donkey paths) and footpaths, sometimes enclosed between stone walls, sometimes built up on small terraces with flat slabs along the edge, sometimes so obscure as to require an ability to ‘read’ the ground with occasional confirmation by faded red and blue spots if you get it right.  All the time keeping an eye open for wildlife while taking in the broader landscape and making sure of every step.

I love this kind of walking and now it was all the more enjoyable because I was returning to it when I feared I might not be able to. 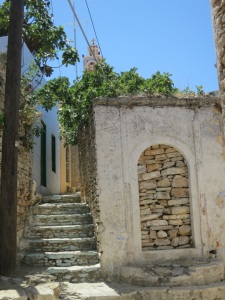 an alley crosses the stream bed of the Cataractis, a torrent in heavy rain but dry most of the time 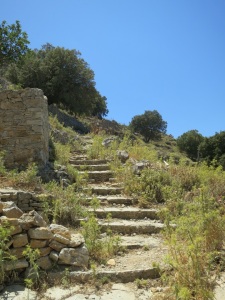 Out of the village and rough steps rise steeply to ………. 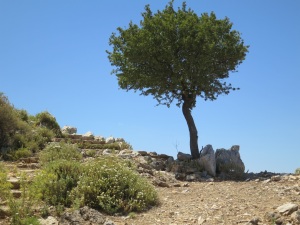 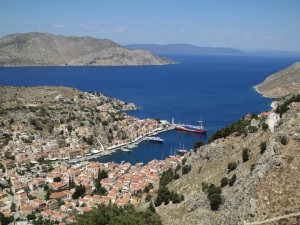 Looking over the main harbour

…. and over Horio, a tight mass of derelict and restored houses with a scatter of churches 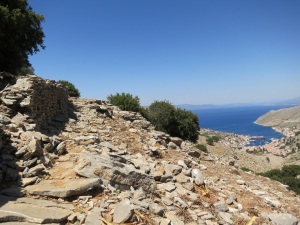 Out on the mountain the views from the path are spectacular

In other places contained between stone walls 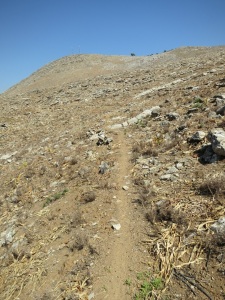 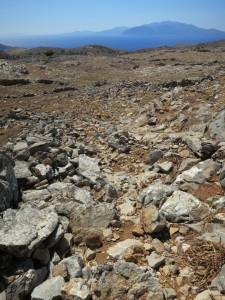 Elsewhere requiring a a practiced eye to see it.