I was discharged from hospital on Rhodes on a Wednesday, six days after having been rushed there by a combination of ambulances and fast coastguard cutter.  Engine management system rebooted, once again firing on all four cylinders, on the Tuesday I had been like a boy-racer gunning the engine as I paced two and a quarter miles along the corridors on doctor’s orders.

Back on Symi I spent Thursday doing chores in the house which I had left a week earlier to pop out for an hour to buy a ferry ticket.  I booked another flight so I could return home to show the family that I was still in the land of the living ….. and bought another ferry ticket.

Then on Friday, 48 hours after I left hospital and the day before I was to fly back to the UK, I went out for a walk with friends, excited to get back into the mountains though slightly apprehensive.   I had seriously doubted when I arrived on Symi in mid-April if I would be fit enough to venture beyond the easiest of short routes with minimum gradient.  I had tried not to be depressed as I sat on the balcony reading a book, looking at the mountain ridge and nostalging about the paths I had walked and off-piste routes I had explored.  Now I was reinvigorated, wondering how far I could push it on this, my first proper trek since Canada and having spent the best part of a week on my back tethered to an intravenous drip, ECG machine and oxygen supply.

First target was to go up to The Viewpoint (Walk 1 on the Greek Island Walks page of the blog).  It would be a test of whether electrocution had indeed given me back a fully functioning engine. It also meant taking my own advice that “If you only do one walk on Symi, this should be it!!!”.   I knew that up to now this year even this simple walk had been beyond my capability.

We followed the narrow, twisting alleys and steep steps up through the old village and then out onto the beginning of the kalderimi (donkey path) to reach the stunted tree overlooking the harbour, one of the best views on the island looking over Horio with the main harbour and Pedi Bay far below, and beyond that Turkey.

Panorama from The Viewpoint

….. and over Horio and Pedi Bay

Many years ago I adopted the ‘alpine principle’ in the mountains, setting a pace which I reckoned I could maintain to the top, avoiding stops which would mean lactic acid build-up in the muscles.  The pace I set now was steady though a little slower than usual but when we reached The Viewpoint, 200 metres ASL and 100 metres above the start point at Lefteris’s kafenion, I was hardly out of breath and brimming with energy.  So we agreed the plan I had been optimistically mulling over, to continue up to the ridge-top and a circuit back to the harbour.

Another 40 metres more gradual climb on the dramatic kalderimi to shade at the tiny church of Agia Paraskevi and, still feeling fresh and increasingly exuberant, a pause for a slug of water.

Soon after, a house on the left marks the start of a clear but more broken path forking off to the right and winding to slabs of rock looking straight down the valley to Yialos. 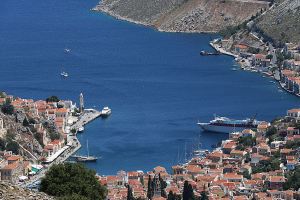 …. and a closer look at the main harbour, few boats this early in the year

Then on to the end of the kalderimi where it meets the tarmac, a short trudge along the road before diverting off to the right onto a little used, very rough and indistinct path dropping down steeply to the col at the top of the Nimborio gorge.

A large slab of rock here is an ideal place to sit for mid-day snack.  The carved stone is thought by some to have once stood vertically and to have had symbolic connection to wine production and it is indeed near to an enclosed Byzantine stone wine press.  However, my view is that its location near to the wine press simply indicates that there was an agricultural community here and that it is purely functional, the base of a primitive olive press.  I was told by a local historian that this was the function of a similar stone high in the cliffs at the fortified Kastri near Emborios on Kalymnos.

From the olive press in the col a good but narrow path tracks high on ridge along the western side of peaceful Nimborio Bay, impossibly blue and turquoise sea enticing far below.  Eventually the route drops down into the back of the harbour at Yialos and the prospect of a welcome drink. 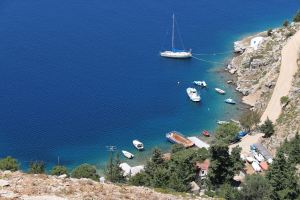 Blue sea and a peaceful mooring in Nimborio Bay

We finished the walk a week almost to the hour after I was electrocuted in hospital. It was by no means the longest or the most arduous or the wildest of treks but five miles of kalderimi and rough path with dramatic views all the way was under the circumstances more than I thought a week earlier I would manage this trip.  Exhilerating!  Prospects for wilder walks looking good.