The shoulder injury I wrote about in my last blog post did not respond to treatment anywhere near as quickly as hoped so regrettably I went for the early bath and flew home.  I guess the body heals more slowly as it gets older.

But before leaving I went out with snowshoes for one last trip.  Painful but with no risk of further damage, I trekked about 4 miles upstream on the Bow River and then back with lots of interest on the way. The ice and snow of the thick-frozen river were etched with signs to be interpreted, the banks edged by coarse grass backed by red-stemmed dogwood which fringes pine forest climbing towards craggy snow-capped peaks close to 3000 metres (10,000 feet) high.

I aimed for a point where a meander in the river brings it close to Vermilion Lakes on the other side of the Trans Canada rail line, hoping to cross over and come back that way.  However, even though only a narrow spur, the trees and scrub were too dense and the snow drifted too deep, even without carrying an injured shoulder, so I returned the way I came.

Soon after rounding the first bend in the river on the outward leg, the town well out of sight, I came across fresh tracks which I’m pretty sure were wolf.  Three reasons for thinking this.  First, they were obviously canine as evidenced by claw marks – big cats retract their claws to keep them sharp.   Second, their size, coyote prints are much smaller: they could have been a big dog but there were no accompanying human prints.  Third, that they were fresh was clear from the fact that no snow had collected in them or been blown away from around them in the strong wind.

During the rest of the trek I saw plenty more prints, not all quite so fresh.  They crossed and re-crossed the river, disappearing into the scrub and forest, in places accompanied by elk prints which I supposed they were stalking.  As noted in a blog post in January there have been reports of wolves around Vermilion Lakes and this section of river is only a stone’s throw away.  Though the prints were very fresh, sadly I saw no wolves, though they may well have been watching me.

The wind was strong, blowing the fine Albertan powder snow, sculpting the surface especially where it had been compacted, drifting deep in the lee of vegetation, occasionally leaving the thick river-ice bare in places, constantly changing.  The snow shoes were invaluable, spreading my weight over deep snow, metal teeth gripping the ice where it was shallow.

The open water of a small stream flowing in from the left (walking upstream) was a reminder that the town of Banff came into being after the discovery and then exploitation of thermal springs on the flank of Sulphur Mountain. Steaming as it emerges, the spring creates a wonderland of hoar frost immediately below the Cave and Basin but as it reaches the river it disappears under a foot or more of solid ice.  Further upstream Sundance Creek coming in on the left is also open with shelves of ice left cantilevered across the water as the river level dropped.

One strange phenomenon under a patch of clear ice close to the other bank is an area of what appears to be bubbles of gas drifting upwards from the bed of the river as it froze, looking like multi-tiered white mushrooms.

As I sat on a fallen log eating smoked sausage I mused wistfully that this would be my last taste of winter until next season. Time to start planning for a summer in the Greek sunshine. 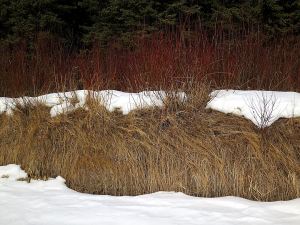 At just over 2,500 metres Mount Edith is not the highest in the area but is a dramatically sharp peak 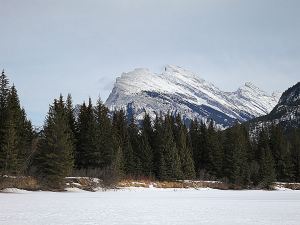 In the other direction the razor-edge of Mount Rundle rises to nearly 3,000 metres

Fresh prints from a lone wolf

…. crossing the river and disappearing into the scrub

The snow on the river is slightly compacted when trodden on even in snowshoes.  Cascade Mountain behind

These parallel tramlines of cross country skis left yesterday are raised above the surrounding uncompacted snow as it blows away in the strong wind.

At a micro level, fine powder-snow drifts behind the slim cones of lodgepole pine, stuck to the surface by a thin layer of ice.  Change of wind direction and these nano-drifts had gone when I returned 3 hours later. 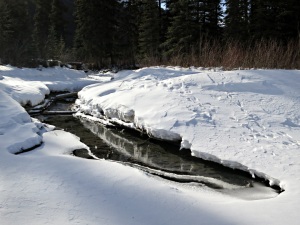 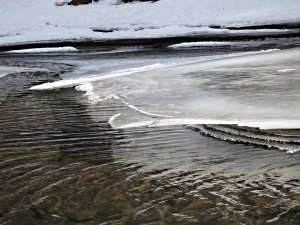 A closer look at the ice layer arching above the water.

Looking back over my shoulder along the snow-covered river bisected by the tracks of my snowshoes, the sun going behind thin cloud as it sinks behind Mount Bourgeau.