I learnt years ago from white-water and sea kayaking that the most likely time to capsize, become a cropper, was on the flat bit of river after the difficult rapid or waterfall or in the shallows after getting through the surf towards the beach.  Job done, relax, lose focus, your gone, a laughing stock.  One guy I paddled with painted on the underside of his canoe “I know I’m upside down”.   You try and guard against it but now and again loss of focus sneaks up on you and bites you in the bum.

One of the reasons I came back to Banff was that I felt I needed to work on things I had been taught (by one of Canada’s top instructors) to improve my skiing which is still firmly and irrevocably ‘intermediate’.  A bug had laid me low for the week before I flew home meaning two days not venturing out of the hotel and the rest of the time distinctly below par.

So I have been concentrating on the skiing since I got back, barely pausing to even think about photography.  Snow has been very good with fresh powder in the mornings for 3 days at Sunshine Village.  Finding my ski-legs almost immediately after such a short break, I tackled more difficult runs with increasing confidence, making a point of returning in the afternoon when conditions had deteriorated due to increased (ski) traffic so I could get used to new challenges.

Day four and I went to Lake Louise, leaving Banff with fresh snowfall and arriving at the ski hill with fresh powder pouring out of the sky.  The conditions were better than I have known and with what I had been taught and growing confidence I found skiing in near white-out (the proper use of the term not journalistic exaggeration) on fresh and constantly replenished powder exhilarating.

Very galling, therefore, when at the end of the morning, having skied from the top of the mountain without a pause and with aplomb if not great skill, cruising to the main lodge down the broad, rightly named, ‘Easy Street’ I became complacent, lost focus, caught an edge and fell heavily.

I knew I had dislocated my shoulder but didn’t want to believe it because it was so stupid a mistake and potentially could end the trip.  Lying on my back in the snow while kindly fellow-skiers retrieved my lost ski and enquired as to my well-being, I flexed the painful joint upwards trying to pull it back together, knowing I couldn’t just hit the ‘undo’ button.  Then I skied down to the lodge, parked my skis, and went to the paramedic centre.  The doctor there confirmed an ‘AC joint separation’ (the point where the collar bone meets the shoulder blade) and recommended an X-ray.

So, an afternoon in the hospital, where the financial damage was almost as severe, confirmed the diagnosis but also confirmed that there are no fractures or cracks in the bones, that the degree of separation is comparatively minor, that it will take 3 months to heal properly, but that in the meantime it’s a matter of managing the pain.  And the humiliation.  It seems the injury is common and the hospital even has a plastic model of the shoulder joint to show the idiots who do it what has happened.

I now face  three or four days resting the arm before deciding whether I can ski again this trip or take an early bath (an old rugby expression, rarely heard these days).

But I did manage a few shots of the gorgeous snow conditions in the days before all this happened. 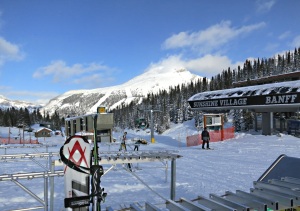 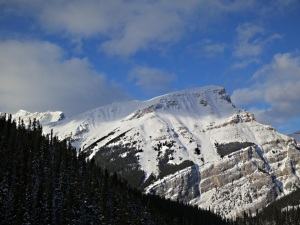 Mount Bourgeau (2931 metres) seen from the Sunshine Ski Area, snow on the upper slopes looking as if it might avalanche …. soon

Lodgepole pines have been laden for months with increasing amounts of snow, refreshed again this week

And now for something completely different.

I was lying in the bath nursing the dislocate shoulder and trying not to be glum about not being able to ski, when the word ‘uhtceare’ popped into my head.  I fished around the murky depths of my brain to try to remember its meaning, then gave up and Googled it (when I got out of the bath).

That led me to The Guardian article about ‘The Horologicon’ by Mark Forsyth which I read a couple of years ago which introduced me to it.  Indeed I included it in a blog post:

Reading on I came across ‘feague’ at number 9 and then this article from the New Zealand Herald in 2012.

Life would be so much more boring without these things.