Symi: The Day I Shrank, and other adventures

Sunday 21 June, the summer solstice, time to climb Oros Vigla, highest mountain on Symi.  The summit is barely a mile from the house as the crow flies but I’m not a crow so the 500 metres height gain comes the hard way. Look up the Kali Strata from Lefteris’s Kafenion, pint in hand, and it’s there, straight above.  In truth it’s a very modest mountain, 618 metres according to the SKAÏ map, a little less by the altimeter in my watch. But the direct approach, the ‘direttissima’, is challenging.  No path, just up the terrain.

The route, first steeply up to Profitis Ilias monastery (amazingly not on the top of the mountain!) is initially frustrating, through a Greek gates made of an old metal bed fastened with bits of tatty rope, now rarely opened since a dirt road was bulldozed off the zigzag tarmac.  Takes time and ingenuity to untie.  The once well-made kalderimi to the monastery is overgrown and collapsing.  Then another metal bed-gate similarly tied, to reach the top edge of the monastery and onto the open mountain.

Pick a line carefully up a long rib of rock offering rugged but secure footing for a few hundred vertical metres trending rightward towards the summit.   Then at the top of the rib find a way between and over rocks, avoiding the loose shale as much as possible.  It’s a steep, unrelenting and tiring climb in the heat but best to keep moving rather than stop as lactic acid builds up in the muscles.  Reach a col and annual health check complete.  I reckon that if I survive the climb up the front of Vigla my heart is good for another year.  But who knows.

Pass the telecom masts on the neighbouring peak and ignore the fact that you can get there by road up the back of the mountain.  The top is not spectacular but does have a trig point.  The views are better on the way up but on the summit you can see 360 degrees.  It’s impressive but the real satisfaction is getting up there the hard way.

Almost at the top, looking down over the town with Turkey in the distance : another country, another continent, another world,

Looking down the route

The rock up here is very weathered, gnarly limestone

From the top the route follows bits of goat path to the other end of the ridge, pausing on the way at a ridge-top threshing circle at noon to celebrate the solstice with the customary photo of the shortest me, my shadow shrunken by the now near-overhead sun.

A shrunken me in the ridge-top threshing circle

Zooming in on the harbour from the ridge top

Finally drop down to the deserted village of Gria and then Pedi for a welcome swim.

On 23 June, with days now drawing in and me getting taller again, I went to check out the feature I spotted on the satellite image of the ‘hidden valley’ I wrote about last time.

the enclosure is just above the blue track on the satellite image between the two areas of distinctly flat ground.

It is indeed an old enclosure.  From the route I had taken along the valley floor it looked like just another jumble of rocks and broken down terraces but looking explicitly for it there is a clear trodden path over the rocks with a large marker stone.  Walk around the perimeter and the enclosure is just as it appears on the satellite image.  One large, concentrated heap of collapsed stones in a circular shape may be an old dwelling, or not.

The enclosure walls are rough-built with irregular stone, none of it dressed, which may point to this being a very old construction.  It isn’t as big as the enclosures closer to the sea which I explored last year and it may be that this was used temporarily rather than a permanent settlement or, because it is so well hidden from the sea, it may have been used as a refuge from attack. Or it may just be an old animal pen.

Reading the ground, this is a very clear way from the low point on the valley floor up to the enclosure with a very definite stone-on-a-rock marke 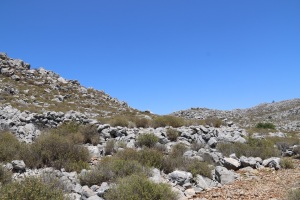 The lower edge of the curved enclosure

The upper edge of the enclosure, less clear but still obviously a tumble-down wall

From the lower edge of the enclosure looking down to the flat area at the lowest point of the valley, an area cleared of stones and which floods and collects sediment

Mind whirling with possible explanations for the enclosure I had been looking at, on the way back to the town I stopped off for a swim in Nimborio Bay before going over the shoulder of the hill back to the harbour.  Not very far away but out of sight, it may be that the settlement had been related to Nimborio, the name a corruption of ‘Emborios’ which is a widespread name in Greece for a trading or market place.  It’s the root of the English word ‘Emporium’.  Apparently Nimborio was the main settlement on Symi long before the current harbour was developed.  That would make sense because the shore at the head of the bay is gently shelving so boats could have been more easily beached and dragged out of the water compared with the fjord-like main harbour now.

No answers, only musings, hypotheses too grand a term for it.

Caffeined-up in a harbourside taverna I set out to walk up the Kali Strata back to the house in Horio 100 metres above.  Taking a comfortable pace so not to arrive soaked with perspiration, mind still on other things, I absent mindedly greeted a local guy walking down, as is usual and polite.  As I turned to say ‘Yassou!’, there was the sound of something dropping onto the dried up leaves behind me.

It was a 4 foot Coin-marked snake.  Climbing on the walls of one of the many ruins on the steps, presumably in pursuit of a rat or some such, it had obviously lost it grip and was now in a right panic.  I dropped my rucksack and whipped out the camera to take photos of it but it was moving so fast I had very limited success. The guy looked at me as if I was mad.  I suspect he thought I was getting out a big stick to beat it to death which is apparently the local way of dealing with snakes. It disappeared down a hole at the entrance to the derelict property.

Chasing along the side of the Kali Strata, image blurred

Disappearing down a hole at the threshold to a derelict mansion

Drying off in the sun after my swim at Nimborio I was playing with pebbles and balanced one thin one on its edge, and then lay down to photograph it.  Not art, just a bit of whimsy.  Later it struck me that it symbolised how finely balanced things are in Greece at the moment.  Crucial referendum on 5 July.  Banks closed for a week with a limit of €60 a day local people can withdraw from their Greek bank accounts.  Those of us with bank accounts in other countries can withdraw up to the usual limit.  The Euro is very weak against Sterling at the moment so to make sure I’m covered if ATMs are not restocked after a rush on them I took advantage of the very good exchange rate to make sure I have cash-in-hand. 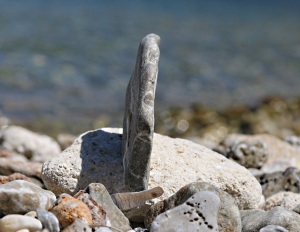