Nor does it have anything to do with the Greek economy which, despite the attempts of the IMF and the ECB to undermine it, and the grossly inaccurate and morally reprehensible  scaremongering in the media, continues to function perfectly normally for visitors.  I see little difference except that there are fewer people coming.   Everything functions as usual.

This is a whole different story.

I don’t enjoy the tedium of trudging tarmac.  Unfortunately, some of the really enjoyable walks on Symi involve a modicum of it because bulldozers have been allowed to obliterate ancient kalderimia and monopatia (donkey paths and footpaths).  I try to take an interest in what’s going on to the side of hard-surfaced  roads but frankly I switch off my brain.  It becomes a matter of increasing speed and mental survival.

It is therefore with some satisfaction that in the last few weeks I have managed to put together a couple of circular routes which reduce contact with tarmac or concrete to a few metres.

The one with which I’m most pleased, and which there are very few people I would take on, I did first at the end of June.  Most of it is fine but the key section, the main tarmac avoidance bit, is …. well, judge for yourselves.

The route starts out going to the top of Horio, the old village, then onto an ancient kalderimi, up to the The Viewpoint, a walk which I say on Greek Island Walks “If you only do one walk on Symi this should be it”  (view), and then onto the open mountain.

Cross the tarmac rightwards at the monastery of Agios Perivliotis (one of the very few with a name outside so you know where you are!) onto a concrete track for less than half a kilometre then onto a rough dirt track off to the left.  Left again below the monastery of Panagia Mirtioditissa (Virgin of the Myrtles), continuing to rise.  On the left is an extensive outcrop of solution-eroded razor limestone, to the right views down over the fortress monastery of Agios Roukouniotis and the route of the most interesting part of the trek.  The track climbs to reach 410 metres at the wonderfully peaceful monastery compound of Agios Nikitas Kotika with its sublime sundial. 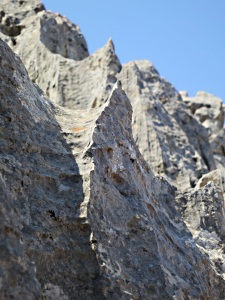 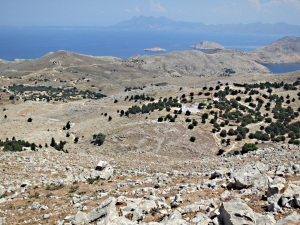 Steep rocky drop to the mid-level  plateau and the Roukouniotis fortress monastery, Turkey in the distance looming large

From there it’s on a very thin path marked strategically with vertical stone-on-rock markers.  The problem at the end of June is that the thyme is in full flower along here and the air is full of buzzing ….  and bees.  I’m not a nervous walker by any stretch of the imagination, but this section had me on edge the whole time.  I must have accidentally kicked one, maybe two, which stung me in rapid succession on both ankles. Little b….ds!!!

It’s slow going between rocks and low vegetation.  Reading the ground as the path meanders through limestone rocks sculpted by solution erosion is easy, if you know what you are doing, and the occasional marker confirms the right line. Next target is the ridge-top Lappatoniou Castle.  It’s not an impressive structure compared to the massive fortress on Nisyros dating back to some say to two millennia BC, or the  Crusader castles on Rhodes or Halki, but it’s a very dramatic location. 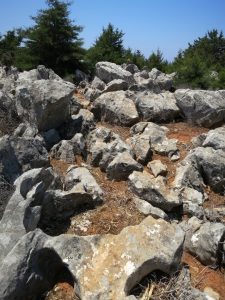 Path meandering between and over eroded limestone 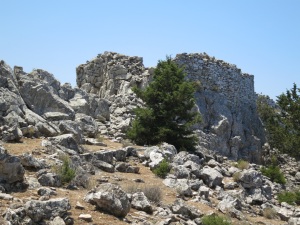 Clamber up into the castle and across the broken-down walls at the western end and then drop down onto huge flat slabs of rock.  Perfect place for a banana break and a siesta.

Limestone slabs below the western end of the castle

A peaceful place to stop – ησυχία

Symi, The Hot Rock. Take a 10 minute siesta and you leave your mark

Continue on to an abandoned settlement at a lower level, less defensible but also less visible to pirates (which were once a scourge of these islands) and then dive off to the right onto an old pathway zigzagging every which-way  to the Ioannis Theologos monastery on the north side of the ridge.  Less than half a kilometre through cypress woodland but you definitely need to be able to read the ground for this bit, interpret ground trodden many years ago but not recently.  Faded red paint dots have been recently augmented by strategic stone-on-rock markers but they only confirm what you have to read for yourself.

Yes, this is the path down through the cypress woodland, simple vertical stone marker next to faded red dot at bottom right

From the Ioannis Theologos monastery the path is like a motorway.  Very well trodden and in places marked maybe centuries ago by large stones set on edge on the downhill side.  Some prats feel it necessary to put cairns on top of the edging slabs.  Some prats, like me, feel it necessary to kick them off in disgust.  If you can’t tell this is The Path, you shouldn’t leave the harbour.  There are a couple of Byzantine stone wine presses alongside the path showing that there must have been an extensive agricultural settlement centuries ago.  Go off to the left on a network of other paths and there are large terraced fields hidden among the trees. 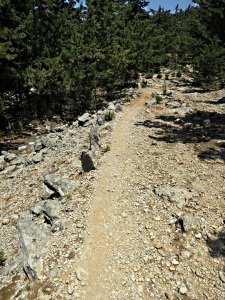 They all eventually lead to what my wife and I dubbed ‘Tortoise Square’ (having seen them here on two occasions), a very distinctive and extensive open area with old stone houses, now roofless, at the eastern edge and a huge stone-built water tank. 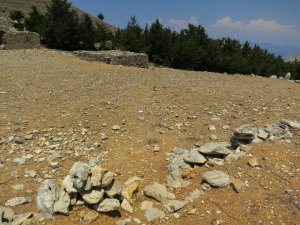 ‘Tortoise Square’. The path is diagonally across to the right-hand corner of the lower of the two stone structures which is a very large water tank with a significant amount of water still inside

Here the path splits.  The main path continues to contour the mountain and returns to Horio.  Another goes off left at the side of cypress woodland downhill towards the monastery of Agii Anargyri and then to the  fortress monastery of Agios Roukouniotis, seen from above earlier.

This is where the walk begins to get really fun.  What mountaineers describe as ‘in danger of becoming interesting’.

At the end of the cypress woodland on the left, leave the path (stay on it for an easier option) and drop straight down the mountainside. It’s rough underfoot but easy to pick a way between and over the rocks. I took a line to go to the left of the  30 or so beehives – I’m a wimp, I don’t fancy being attacked by trillions of nectar-laden bees en route to drop off the day’s produce.  Even so, scouts were sent out to buzz me and warn me off.  They followed me until I was well out of sight of the hives.  I’m not making this up!!!

Drop straight down the mountainside

The left hand end of three rows of beehives, about 30 in all – that’s a lot of bees

The hives are just above a dirt track the other side of which is the start of a deep gully which drops over 100 metres in less than half a kilometre.  It’s a whole series of dry waterfalls and down-climbing them is challenging.  Some are just a couple of metres, others are 10 metres into deep sandy plungepools.   Some are smooth, sloping slabs, some are narrow chutes, others are jagged edged tumbles down shaley strata.  You don’t need ropes but a modicum of climbing skill is helpful.  The rock varies from massive grey/white limestone to deep purple fractured shale veined with white.

Standing at the top of the drop down the gulley

Looking back up the first of the longer falls

A warning – getting it wrong can be terminal, even for professionals 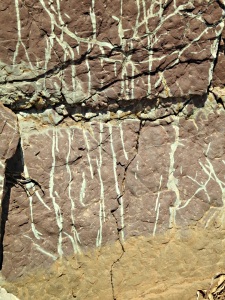 The face of the bedding planes, a rich purple in contrast with the pale grey elsewhere

There was no indication that anyone had been down the gulley.  Sometimes there are spent cartridge cases which indicate that in the season hunters go to remote places in search of chukkas (rock partridges).  There were no shell cases.  But there were chukkas. with noisily whirring wings and loud chuntering as two, then three more, then within a few seconds a total of seven flew off in panic when I reached the overhanging rock they were sitting under.  When you are delicately poised on a near-vertical rock slab you have to control the instinctive reaction to sudden noise.  Soon afterwards a Little Owl looked me in the eye with blank astonishment when I dropped down from above, before flying off silently, not even the faintest swish of its feathers, almost as if to say “I can’t be doing with this.  I’m here for peace and quiet.”   I apologised.

It was at the top of a long sloping slab that I discovered I had lost my shirt.  I always carry a spare clean T-shirt in case I end up somewhere respectable or go into a taverna for a frappé at the end of the walk.  I stopped to take a selfie of me framed in a narrow gap by placing the camera on a purpose-made beanbag on top of the spare shirt on a rock and using a remote control … and the shirt wasn’t there.  I remembered taking it out at the Ioannis Theologos monastery when I stopped for a swig of water in the shade and forgot to put it back.  No real problem, just irritation at my carelessness. 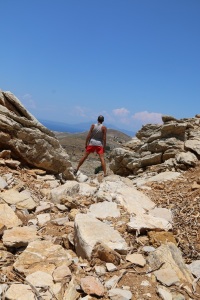 Standing in the gap before another long drop (note: the earth tilted on its axis just before the remote control triggered the camera)

One last tricky descent and I reached the bed of a larger gorge running down to the sea at Tourkogiali.  I turned right and followed the easy bed of the gorge upstream a short distance before climbing out of it to cross a road and join a path back to Yialos with dramatic views over Nimborio Bay.

Looking back up the gulley from the bed of the gorge.  Easy really

That’s when I made the decision.  I would do the same walk again tomorrow in order to recover the lost shirt.  Good excuse to do that gully again.