I was attacked by an airport: an unexpectedly wild walk

I did nothing to antagonise it.  Malevolence on its part is the only explanation.  That or ‘smart’ technology out of control.  Which is even more frightening.

I was on my home from Greece in the latter part of October.  I had taken a ferry to Rhodes from Symi, a tiny, in many ways idyllic island because it cannot accommodate an airport which means it only suffers mass tourism for a couple of hours each day when trip boats are in.  Charter flights had finished for the season and I was returning with Aegean Air, the Greek flag carrier, first to Athens and then a connecting flight to Manchester.

I had opted for an onward flight which gave me only 50 minutes to exit the aircraft, negotiate the airport and make the connection. My seat towards the rear of the plane put me close to the rear doors and when steps were wheeled up I thought all was well.  Not so.  The rear exit remained closed and we all had to shuffle along the aisle and leave at the front, with me behind about 200 other passengers.  By the time I was off the plane I had barely 30 minutes

I raced along the narrow passageways towards the main terminal, edging past people wherever I could until I reached a concourse with overhead screens pointing to a range of departure gates.  My flight was from Gate A1, up a long set of stairs to the left.  Now I could speed up.

Or not.  The stairs were clogged from top to bottom with slow-moving passengers dragging over-sized cabin luggage.  Upward progress was clearly painfully slow.

Alongside the stairs was a stationary escalator with nobody on it.  “Must have broken down again” I thought and without a moment’s hesitation sprinted towards it and started to go up two steps at a time.  About a third of the way up the parallel shiny metal strips on the treads and the risers started to do strange things to my eyes, inducing weird, disorienting impressions of movement.  So I stopped looking at them and instead looked at the passengers trudging up the stairs alongside.

Over half way up I realised something was wrong when an elderly woman with a zimmer frame on the stairs started to overtake me.  I speeded up but cold hardly keep pace.

‘Bling!’ The light went on in my brain.  The escalator had started moving.   Downwards.  I was nearly three quarters the way to the top when it reached full speed.  I made the choice to continue upwards and started running.

As I reached the top I realised that getting off would not be straightforward.  Instead of the steps levelling out as happens when you get off an upward moving escalator, the steps were becoming increasingly steep as they moved towards me.  I couldn’t afford to slow my pace to negotiate the rising obstacle or I would have been going backwards.  Nothing else for it, I would have to continue running and jump over the rising step onto the floor beyond.

I leapt, made solid ground but in doing so my sandalled instep was savaged by the teeth on the edge of the rising step.  I landed on a sign painted on the floor at the top of the escalator in two languages saying “automatic operation”.

I limped rapidly forward towards the departure gate, glanced at my sore foot and realised there was a stream of blood flowing from it.  Two parallel gashes cut my foot to the bone.  I stopped, pulled from my pocket a couple of paper napkins which I pick up for just such emergencies, loosened the strap of my sandal, rammed the napkins underneath, cinched the strap tight and carried on running towards goal.

I caught the flight with a few minutes to spare.

Only a couple more days now and I’ll be back in an airport for the flight to Canada.  I’ll be paying more attention on escalators.

In the meantime, at the end of an afternoon, I managed to take advantage of a sunny day to go back up the ridge at the southern tip of the Brecon Beacons National Park.  Another spectacular sky to the west.  As I started back towards home with gold still tingeing the horizon, the scattered, thin cloud overhead turned red.  Blood red. 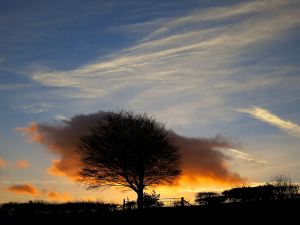 Gold on the ridge-top 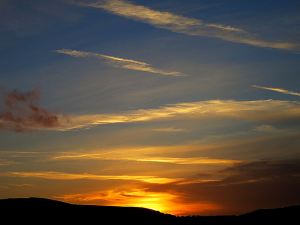 Golden sky sinks behind the ridges to the west 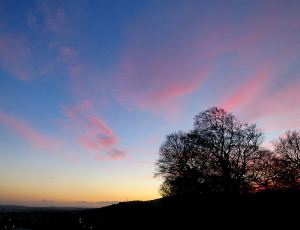 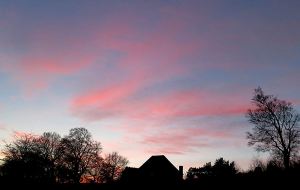 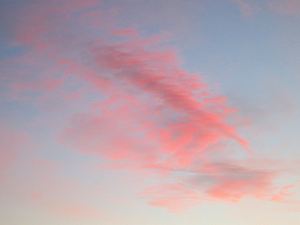 A gash in the sky

1 Response to I was attacked by an airport: an unexpectedly wild walk