You can’t live life looking to the past.  After a few weeks under grey skies reminding myself of Symi summer sun it’s time to focus on the present and look to the future.

The turning point was when yet another grey, wet morning was replaced by clear skies and bright sunshine so at the end of the afternoon I walked up to the ridge behind the house.

At the southern tip of the Brecon Beacons National Park and around 1000 feet ASL, the Folly Tower above Pontypool is 30 minutes away at a brisk pace and offers great views in all directions.   Visibility was crystal clear as the temperature dropped, humidity condensing out, cold air unable to evaporate the moisture in ground sodden from previous weeks of rain and mist.  With clear skies there would soon be a ground-frost, an air-frost by early morning, but huddled in a polar-fleece I sat and watched as the sun sank slowly behind the mountain ridges ranging away to the west in a clichéd golden glow.

In just over two weeks I will be in the Canadian Rockies in deep snow but for the moment this was great, a mountain top, Old South Wales at its autumnal best.

Autumn gold reflecting in the Abergavenny-Brecon Canal, the south east boundary of the National Park 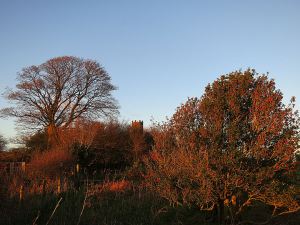 Burnished by setting sun. holly tree on the ridge, the Folly coming into sight

Looking west from the ridge-top path 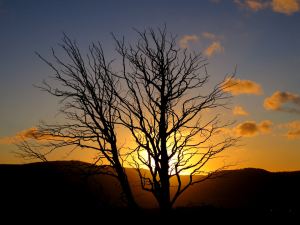 Silhouette against the gold 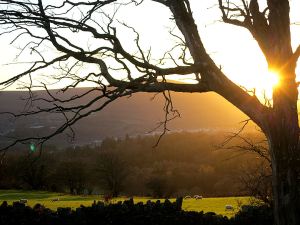 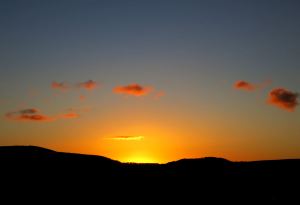 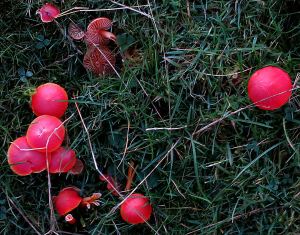 Leaving Scarlet Hood fungi in the grass, edible but too attractive to pick