Tilos: a walk to the beach the day after the mountain destroyed my sandals

Though I set out with that specific intention, I didn’t get to have a swim on the day that The Mountain Destroyed My Sandals.  I passed the top of the path down to Depsoti To Nero on my way back but reasoned that a 120 metre descent to the beach would be inevitably, as sure as shit follows fart (the speed at which it does so is directly proportional to age,…. or so I’m told), followed by a 120 metre climb back up .  True, I could have replenished my water supply from the spring but my feet hurt because my sandals had died and I had by then been walking for 6 hours under cloudless sky with very little shade and the attraction of a cold beer under the bougainvillea at Agios Stephanos outweighed the urge to get wet.

But the next day I wanted a swim!!

OK, it’s time to ‘fess up. (this is a long and very meandering ramble so leave now if your eyes are glazing over and you feel the overpowering sense that ‘there’s more to life than this’.  Believe me, there is …. don’t read about it go and do it!  But back to ‘fessin up…. doesn’t it make you feel younger when you adopt the terminology of ‘The Youf’, as they are known in Old South Wales’, even if it was ‘The Youf’ of 20 years ago.  But who can keep up with changes in the language of Youf Culture, especially if you are approaching a birthday ending in a ‘9’ and know that decade-nce looms ….. Persevere and you may find something of interest.  Or not.)   But again, back to the ‘fessin up.

I don’t do beaches.  Great, indeed fabulous, to get there after a long, hot walk and have a swim.  Extraordinarily refreshing and invigorating in the early summer before the water warms up to bath temperature.  But you dry off in the near–solstice sun within 10 minutes and then what?  Another swim to cool off and sluice the sweat?  Three iterations is normally all I can cope with and then I start climbing the walls.  Or the cliffs as there are generally no walls around.

Soooo, I decided that the best approach was to  head for a beach via a route which would be more of a challenge.  The primary contenders were Tholos and Stavros, both on the other side of the island.  Unfortunately the construction of a tarmac road up to and along the ridge to access the island’s waste disposal facility has provide access to the top of the paths down to both beaches and nerds who hire scooters and drive up there think that the motorway-style signs to Tholos point to a vehicular route.  Wrong!!!  I haven’t seen this myself but was told in the taverna the evening before that a group of  eight people, four male and four female, were seen walking topless along the top section of the Tholos path before it drops steeply and things get very rocky.  Very Rocky.  My interlocutors had gravel-grazed eyeballs so I know that the topless bit was true.

I decided to head for Tholos in the expectation that the word would have got around the British, or more probably Scandinavian, holiday communities that Tholos was a no-go and they would instead be being rotisseried on Town Beach sunbeds or slumped propped up on a beer in front of repeats of the World Cup (FIFA for those who don’t keep up!).

There is a very good, easy path climbing up to the ridge from part-way along the seafront road in Livadia, crossing over the ridge-line tarmac to a brilliant path down to the beach.  A very good and enjoyable walk.   I decided instead to walk up to Agia Anna, a small whitewashed chapel on a shoulder half way up the mountain and then take a narrow path up to Agriosikia Castle on a strategic prominence overlooking the whole bay.

The route starts out along roads constructed to facilitate residential development, at whose expense I don’t know but there is only one house on the new road.  The house is close to the end before it reverts to bulldozed track and the owners must have come out of the deal very well.  Neither the road nor the footpath from it up to Agia Anna are shown on the SKAï map, reinforcing the need for caution using their maps.

Soon after the end of the surfaced road the path strikes off meandering up to Agia Anna through rugged rocks (round which, no doubt, the ragged rascal once ran) requiring some, though minimal, ability to read the ground.

The path to Agia Anna leaves the dirt track 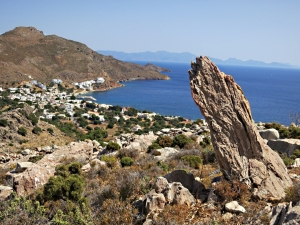 … and winds up through rugged rocks

watched by the wildlife

Though there is no shade tree at Agia Anna there is shade from the building and after a slurp of iced water it’s onto  a narrow path winding gradually up towards a gully and then more steeply up at the foot of high crags to a fenced enclosure at a spring at the head of a gully . 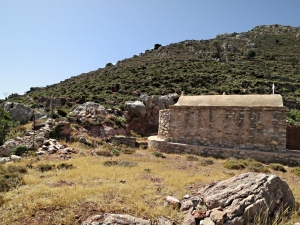 The onward path climbs up the rocks behind the chapel

….. winds up towards the foot of towering crags

Looking down the side of the crag from the enclosure 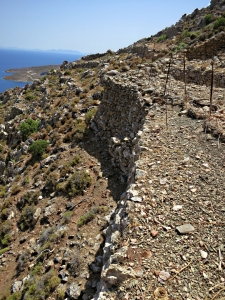 …. before picking a way along the narrow top of a wall

Zooming in on the harbour

There are large rocks behind the enclosure providing shade for what seems like half the sheep and goats on the island judging by the depth of droppings, pellets like dried peas over a bed of rich black compost.  At the end of the 19th Century Chile, Bolivia and Peru fought a war over rights to guano, (bird shit), then much valued as a natural fertiliser.  I’m not saying that these deposits are as extensive but they are there for the excavation, all it would need is a shovel, some bags and a string of donkeys.

The path continues upwards behind the enclosure and then leisurely towards Agriosikia Castle which is more impressive from the outside than the inside though recent modest archaeological excavation might change that.  Sometime.

… leveling out as Agriosikia Castle comes into view (centre top) 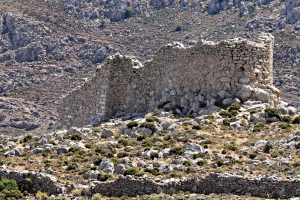 closer view of the castle

Panorama from the crag behind the castle

From the castle the bulldozed track is to be ignored as there is an alternative, a good path leading down to the point in the col where the path from Livadia and that to Tholos intersect the tarmac road.  There were no scooters parked there so the prospect of having to share the beach was diminished. 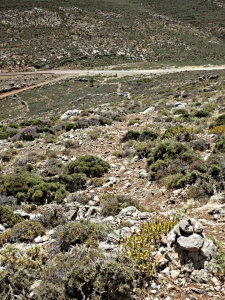 Neither the path to the castle nor that down to the col from it are shown on the SKAï map but both very definitely exist and are enjoyable.   By contrast, had I chosen to go the Stavros beach and visit the Stavros Lambros Castle overlooking it, the short footpath to it from the col, clearly marked on the map ………. doesn’t exist.

The descent to Tholos beach is 200 metres, first gradually on a well-trodden path and then a drop down a dry stream bed with wildly contorted folds of rock which must have been created by random but immense pressure, like crushing an empty 1½ litre water bottle with your hands from both ends and then screwing on the cap.  A new section of path has been forged to by-pass a small, dry waterfall which I followed on the way down but chose the old path on the way back and climb the fall. 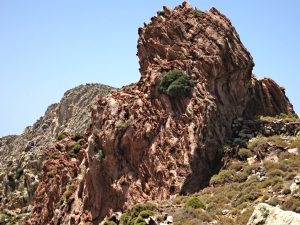 Gnarly rock of the small waterfall

The great thing about Tholos beach is that it’s really two beaches, the second reached by climbing through a fissure in the cliff on the right (but don’t tell anyone!).  I usually go straight to ‘Green Tholos’ because even if those who make it down to ‘Red Tholos’ are ‘textiles’ there is no embarrassment.  Except for the time when I returned to the beach after a swim and found a French guy who, with no sense of beach etiquette, had parked himself next to my gear and was being followed by his swarm of young kids from who he was obviously trying to escape in order to read his book..  No doubt it was a satirical treatise on why the French have no word for ‘etiquette’.

Looking through the fissure in the cliff to ‘Green Tholos’

…. and looking back along the beach of ‘Green Tholos’ to the cliff and its fissure

Later I sat on my balcony and looked back up at the castle in the evening light.

Agriosikia Castle seen from my balcony