The weather in my neck of the woods, indeed throughout the UK, has been crazy.  With the exception of a very occasional overnight dive to near zero with accompanying ground frost, temperatures have continued above freezing for weeks, sometimes hitting double figures. Grass is still growing, trees are starting to bud, spring plants are well out of the soil.  As written about in recent ramblings, the unseasonably mild spell has been accompanied by overcast skies, heavy and prolonged rain which, coupled with strong westerly winds generating storm-surges on ‘Spring’ tides, has caused much flooding along major rivers and  estuaries as well as turning paths into streams, streams into torrents.

However, attempts to get out walking in the mountains have been thwarted not so much by the low cloud and rain as by the need to spend increasing amounts of time on preparations to go to Canada.

Winter gear to locate and make sure it is all clean and still serviceable.  Skis and boots to check.  Currency to order and collect.  Banks to be alerted to the use of plastic abroad.  Flight tickets, transfers and lift passes to be booked printed out and collected together.  Passport to be fished out from the ‘safe’ place it was put on return from Greece in October.

The house has to be prepared to leave for a month.  Food in the fridge to be run down so there is nothing left to moulder.  Veg to be used up so it doesn’t decompose.  Bags  of potatoes harvested from the garden to be distributed to friends and family as they will be sprouting by mid-February when I return.

Friends to meet up with.  Some will have gone back to homes in France by the time I return. Family to see.  Neighbours to have a quiet word with and arrange for an eye to be kept on the house.  The value of good neighbours cannot be overestimated:  while I was in Canada 3 winters ago hard frost and strong wind damaged the chimney which fell through roof.

I had set aside a week to sort all this, a comfortable timescale.  But the relaxed regimen  started to unravel from day one.  My daughter was unable to visit before I flew to Canada as planned so instead a trip to the North of England was mooted, taking out the last weekend.  Monday, Tuesday and Thursday evenings of the final week I had arranged to meet friends for a pub meal and/or a pint.  Wednesday afternoon my son and family were coming for a meal.  All still manageable, if under a bit of time pressure.

But then more sardines had to be rammed into the tin.

I wrote before Christmas about the problems, nay, the minor trauma, of the struggle to salvage the memorable number from my old mobile phone. (see)  Taking advantage of lower prices in the post-Christmas sale I signed a contract for the new smartphone of my choice.  Problems with it being activated meant three visits back to the shop in Cardiff were necessary: an hour travelling there; an hour trying to sort things out; an hour travelling back.  Half a day each time!!! Finally sorted by Wednesday afternoon, just in time to get home to cook for the family.  After which an unexpected last-minute meet for a pint with friends before they return to France.  Then return home and crashed into bed

By Thursday things were becoming a trifle manic.  No gear sorted.  No packing done.  No documents printed.  With a deadline towards the end of the day of getting to the travel agent to collect Canadian currency and then going yet again to Cardiff to meet another friend for a curry and a pint I had to cram in a lot.  I needed a haircut, so down to town to the barber’s first thing.  Pleasant walk back through the park, looking wistfully at the first blue sky for days but knowing that because I had to sort my gear and start to pack I had to resist the urge to escape up the ridge again.

Back home I flew into a flurry of activity: throwing winter gear into a pile ready to go in the Big Bag; checking and packing skis, boots and associated paraphernalia; tracking down e-mails and printing tickets.

At about 14.00 I stopped to gobble down some food and noticed that the sun was still shining.  Uncertain about temperatures in the garden while I was away, another task was to move potentially vulnerable pot-plants, mainly various types of ferocious agaves, into the Blue House (a large greenhouse except it’s blue) which would afford protection if temperatures fell below the minus 5 degrees that they can tolerate.  I had hesitated to put them inside while they were wet, which they had been for weeks, because that can result in losing them all to mildew.  Suddenly and briefly dry, a window of opportunity, half an hour and only a few bits of torn flesh later, the job was done, plants stowed safely under cover.

Friday was even more manic than Thursday. It began dramatically enough with a fiery, golden sunrise. 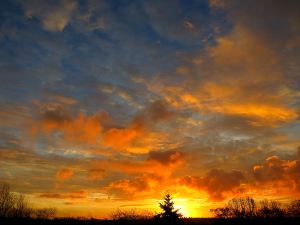 A leisurely breakfast then with much of the preparation in hand I had 3 hours to pack for the weekend before meeting the ladzwotlunch, an offshoot of the rebellious group of former colleagues of the Not-The-Xmas-Dinner, direct from which gathering I was catching a train to travel north.  Then the plug was pulled on the timetable.  First, an e-mail call from my son needing a lift to collect his car from the repair garage.  The relaxed schedule became tight.  As he arrived, the phone rang and the ADT emergency call-out centre alerted me as a key holder to an alarm indicating a potential intruder at a friend’s house, requiring  a visit to check.

By the time I arrived home and parked the car in the garage I had 10 minutes (no exaggeration) to pack ready to leave for the weekend.  I threw electrical gubbins into a rucksack and legged it for the bus.

Convivial pub lunch then at 15.15 I sank back in the seat on the train after one of the most disjointed, disrupted weeks I can remember.  Now nothing to do for 2½ hours but sit back, read a book, play with my new phone, remember what I had forgotten or had no time to pack, and doze.  At least I had mown the lawn.

Barring the unforeseen, the next blog post will be from the Canadian Rockies.