Normally I’m obsessive about tidying up behind me.  Food shopping gets put in the cupboard or fridge as soon as I walk in through the door.  Clothes get folded or hung as I take them off.  But I hate unpacking when I get home at the end of a trip.  I defer it as long as possible.  I take my clothes out of the bag and wash them but the rest can remain in the bag on the spare bed for a month or more.  It’s a pathetic clinging on to the thought that the trip isn’t yet finally over.

I’m back home now but reliving the last couple of weeks on Symi, remembering good walks, good conversations, as I transfer photos from my netbook to the PC and check them over.  So there are still some blog posts to write.

A long-time favourite walk on Symi is across the spine of the island, down to the tiny iconic cliff-edge monastery of Agios Vasilios (featured on the cover of the SKAÏ map of the island – no.341) and Lapathos Beach below it.  Unlike the ‘off-piste’ routes of recent posts, this is on good, clear footpaths.

The first part of the walk is through the narrow, winding alleys of Horio, the old village, to come out on the shoulder of the hill at the best viewpoint on the island looking straight down into the harbour, probably the most dramatic in Greece, across to Nimos Island with Turkey beyond, and down the valley to Pedi Bay.

From the viewpoint an old stone-paved kalderimi winds at donkey-friendly gradient, well polished by hooves, passing the chapel of Agia Paraskevi with its large oak shade tree, up to the new tarmac road at the monastery dedicated to the Archangel Michail Perivliotis and the burgeoning hamlet of Ksissos.  There are variations on the same view much of the way.  Those who hire a scooter and park at Ksissos to walk to the beach miss all this.

Until a few years ago there were more churches than houses in Ksissos but recently there has been a spate of house building accompanied by enclosing land.  The enclosures are functional but far from aesthetically pleasing  2-metre high chain-link fencing hung from steel reinforcing rods driven into the ground.  At the end of the concrete road through the settlement the path dives off to the left between two such fences ….. which at least saves the dilemma of choosing the right line over the rocks.

The path, clear and well marked by Red Paint Man and the occasional stone cairn, flanks the increasingly dramatic Vasilios Gorge until it reaches the edge of the limestone cliffs.  The monastery is clearly visible below, sharply outlined against the sea, with stone steps zig-zagging down to it.

Lapathos Bay comes into view down the Vasilios Grge 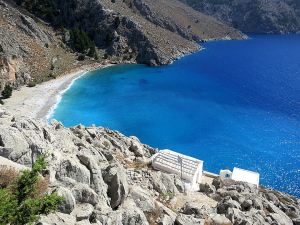 The way down to Lapathos beach, 200 feet below, is steep.  Initially down rocks in a gully between cliffed walls, and then on loose stony ground, it doesn’t require any specialist climbing skill but it does involve rock scrambling using hands as well as feet and requires a degree of nerve and confidence.

The descent is worthwhile.  Few make it this far even in the height of summer and the beach, backed by cypress trees affording shade, is plenty big enough to ensure privacy …. unless the Round-the-Island trip boat pulls in when circumspection in dress-code is advisable for the hour it stays.  A towering cliff midway along the beach has a fenced pond at its base, though I wouldn’t try drinking the water.

Looking along the beach towards the monastery perched on the cliff

The Vasilios Gorge, emerging onto the beach at the bottom of the descent path, is even more dramatic from the bottom than the top and well worth exploring.  With a bit of mild rock climbing capability it offers a very interesting ‘off-piste’ alternative route back.

In July and August the walk back up to the ridge can be energy sapping in the heat of the afternoon but in September the sun isn’t as high, temperatures are lower and there is often a cooling breeze.  However in the gorge the air is still and the limestone walls reflect and radiate heat stored up all summer.  I learned by hard experience on Tilos a few years ago the effects of dehydration and I pour water down my throat at frequent intervals.  By the time I get back to the shade tree at Agia Paraskevi the ice in my 1½ litre bottle has all melted but the last inch of water is still refreshingly cold.  For the final 20 minutes of the return to Horio my thoughts are split between ogling at the view stretched out ahead, which I’m convinced is one of the best in Greece, watching my footing on the stone-paved path, and anticipating a cold beer.

A last stop under the shade tree at Agia Paraskevi

If you want to hike to Vasilios, there are two Walking Guides to help (click links below).  The first takes you up to the Viewpoint above Horio, the second from there to Agios Vasilios and the beach.  There are a few mistakes, such as reference to the trees as juniper when they are in fact cypress, and changes have taken place since publication.  For example the ‘Glaros’ taverna in Horio (photo 2 on Walk 1) is renamed and the oval metal sign has been repainted… but the steps opposite are still there.  Some derelict buildings have been renovated or rebuilt and two shops referred to have closed. Hopefully revisions will be made next summer.

4 Responses to Symi: a gorgeous walk