Confessions of an inadequate skier

And so to the skiing.  Up at the Crack of Doom on Monday morning (05.30) in order to make an 06.30 start for the 2 hour journey from Calgary on the Trans Canada Highway westward past Banff and then to the ski resort of Sunshine Village at more than 7000 feet.

The snow was in perfect condition with runs freshly groomed.  Shame I wasn’t in good condition myself.  It was like having planks strapped to my feet as I cumbersomely slithered and slid all over the place.  On the second run down an easy ‘green’ the planks kept falling off so when I eventually reached the bottom I made my excuses to my patient hosts, who had been hanging about waiting for me for ages, and took the skis to the repair shop to have the bindings adjusted.

Another run down, this time on my own so as not to further inconvenience others, and it was clear that the adjustment hadn’t sorted the problem.  So I adopted the technique I use when the car breaks down. I poked and prodded and pulled and banged ….. and it worked!.  The planks now stayed firmly fixed to my feet.  Which meant that the only excuse I had left, apart from general incompetence, was the altitude: less oxygen getting to the brain to send messages to the underperforming limbs.

I guess that my technique is not quite right.  I tend to adopt a skiing position which can perhaps best be likened to using the old-style French hole-in-the-floor loos.  Put both feet firmly on the pedestals and stick your backside out while leaning forward to maintain equilibrium.  The steeper and more icy the slope the more I crouch down and stick my bum out, digging the edges of the planks in on tighter turns to slow my downward progress.  It’s a bit like adopting the foetal position when under stress.

But after 3 days of practicing this technique at Sunshine and Lake Louise I think that I am now approaching the level of incompetence and overconfidence which I achieved 2 years ago.  Which is worrying because it means that I get more gung-ho.

But I’ll persevere and hopefully my daughter and son-in-law (both qualified instructors) will tell me to stop being  a nerd and show me what I’m doing wrong. The problem is that the foetal position is so comforting, even on skis.

Truth of the matter is that, no matter how hopeless I am, the skiing is just the means to an end.  It means that I can be up in the high mountains in winter which is fabulous.  Highest I’ve been so far is Lookout Mountain at Sunshine, just short of 9000 feet.  Very windy.  Very cold.  Great views.  Very enjoyable.

Just a few photos to give an impression of the place.  So far I’ve concentrated on the skiing not the photography. 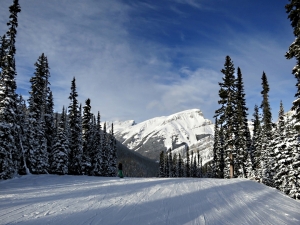 On the way down ‘Banff Avenue’ at Sunshine, a great run for practicing turns 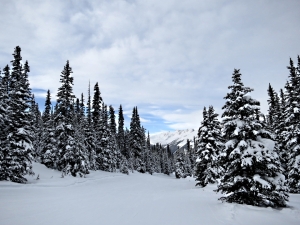 Trees were heavy with snow 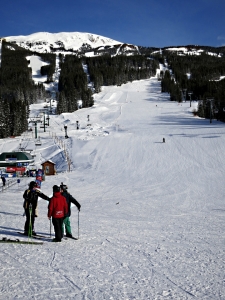 Looking up ‘Easy Street’ at Lake Louise, the pleasant straight glide back to the main lodge