Calgary: from the Eddie the Eagle to the Stampede via Downtown by Barry Skywalker

On Sunday my hosts, proud Calgarians, took me on a tour of the city.  As I have said before, although brought up in a city I’m not a city person.  But I was very impressed with Calgary.

Until now the only things I had connected with Calgary were Eddie the Eagle and the Stampede.  Fitting, therefore that we began at the Olympic Park. Apparently the Calgary winter Olympics in 1988 were the first to make a profit and the ‘COP’ as it is known has since been added to and refurbished.  On Sunday morning it was bustling with participants in many sports, parents with young kids, spectators, and the just-inquisitive’.  Calgarians took Eddie the Eagle to their hearts.  No-one remembers who won the ski jump but everyone knows the gallant amateur who embodied the now long-dead Olympic amateur spirit.  To my mind the International Olympics Committee brought shame on itself when it reacted by changing the entry rules so that enthusiastic amateurs like Eddie could nolonger take part.

Young tots get ski training in sight of the jump

But the COP is not without controversy.  Occupants of the new houses built, and still being built, on the top of the hill behind the ski-jump towers are complaining about snow blowing across the road to their properties when the snow-making machines are operating.  Strange that there should be snow coming from the Winter Olympics site.  And it’s all getting a bit messy because it seems that the houses may not have the relevant development permissions anyway.  Oops!  But great to see so many people enjoying such a variety of outdoor winter sports

From the COP we went to the ‘Downtown’, known as the city centre to Brits, or the Central Business District to us urban morphologists.  If the COP was impressive the Downtown was far more so, very clearly reflecting a growing and dynamic economy.

First stop was Chinatown.  Many Chinese came to western Canada to build the Canadian Pacific Railroad and the ties with China are very close.  Chinatown not only has an architecturally impressive Cultural Centre, opened in 1992 at a cost of $10million and modelled on the Temple of Heaven in Beijing, many restaurants and shops, but road names are in English and Chinese.

Chinese Cultural Centre against the backdrop of Downtown skyscrapers 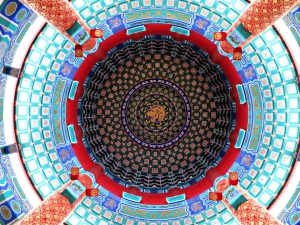 Then we headed for the ‘+15 Skywalk’ a 16 km network of covered walkways linking the many glittering glass skyscrapers and covering most of the downtown area.  The walkways are mostly at first floor level and negotiate the inside of the buildings with shops, and coffee shops and professional services clustered at strategic locations.  All closed On Sunday but apparently thriving the rest of the week.   There are also internal open spaces with seating, sculptures and gardens.  No vandalism.  No security guards or police in evidence.  A few skateboarders getting out of the cold, wishing us happy new year and offering advice on how to get back to the car through the elevated warren of corridors and spaces.

Glass sculpture in one open space 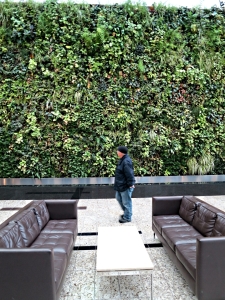 Open spaces are also provided outside as skyscraper reflects in skyscraper 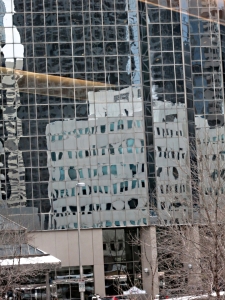 Some reflections are a little distorted

None of the open spaces is more impressive than the Devonian Gardens.  Tropical plants covering a hectare and planted with 550 tropical palm trees and tens of thousands of other plants plus huge coy carp in the ponds and water features.  It is strange to go inside from the subzero temperatures and have to, shed outer clothing, stranger still to see tropical plants against a backdrop of glass streaked with snow and ice.

One of the tropical beds in the Devonian Gardens

One of the wooden carvings by the Salish Indians on dispaly

Wearied by urban walking we headed back to the car at the edge of Chinatown and then back to the suburbs via an elevated view of the Downtown from a  bluff overlooking the Saddledome, Calgary’s main ice hockey stadium, and the stadium where the annual Stampede is held, apparently the second largest rodeo in North America and therefore the world. 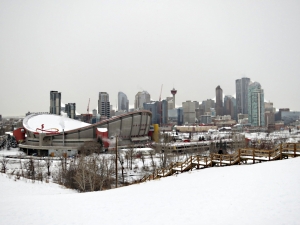 Looking across the Saddledome to Downtown high rise

I’ve done 2 days skiing now but that can wait for another post on Barry’s Ramblings.  Calgary deserves a post of its own.

2 Responses to Calgary: from the Eddie the Eagle to the Stampede via Downtown by Barry Skywalker