Canadian Rockies: where wildlife is red in tooth and beak ….. but it’s all a matter of perspective

Enlarge the images by left-clicking on them

Thursday was a day-off from skiing.  But not a day for sitting on my backside or mooching aimlessly around the shops as some seem to do (generally spouses here with significant others who go off and ski).

Instead I walked along the trail to Bow Falls, from there up the River Spay to a footbridge and then back down the opposite bank.  In the afternoon I went up Tunnel Mountain just to make quite sure that a day-off skiing was not a day of inactivity.

Not having to focus on balancing on the planks on my feet on steep, slippery slopes I took far more photos.  So I’ll deal with the day in two parts in separate posts.  First the gory stuff so if you’re squeamish exit now and wait for the nice pictures.

The path climbs a crag dropping straight down to the iced-up river as it reaches the Bow Falls and offers a good view not only of the jagged ice over the tumbling falls but also of the broad expanse of ice at the right angle bend in the Bow River at the bottom as the River Spray joins it from the south.  There was more open water than the last time I was here indicating that temperatures have not been as low.

From the top of the bluff two patches of discolouration could be seen on the ice.  The closer of the two was fairly clearly mineral deposits washed downstream, the other was less clear but I guessed from the magpies sitting on it and squabbling that it might be a carcase. 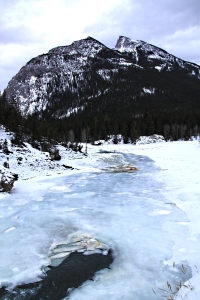 Problems with the contrast between snow/ice and trees, but the discoloration of the ice is obvious

Dropping down the path from the cliff to the river’s edge it became clear that it was indeed a fairly large carcass and from the size and shape I reckoned it was probably a deer.  There was guy standing on the frozen river out towards it so I ambled over to take a closer look and have a chat. 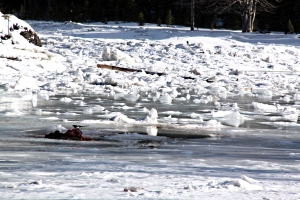 From this angle the freshly stripped rib-cage was bright in the sunlight.  I thought it unlikely that the ravens circling overhead and the magpies perched on the bones would have cleared all that flesh, carrion-eating birds tend to finish off the job begun by  large predators.  I had seen coyotes on this stretch of river barely half a mile further downstream on one of my winter ramblings in 2011 and wondered if it was they who had killed the deer or merely taken advantage of the beast’s demise. 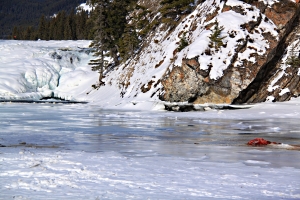 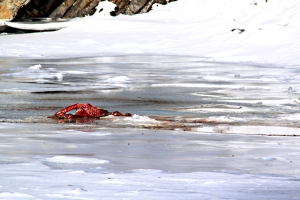 The guy, an Australian working in the new diamond mine in Saskatchewan, said that a few minutes ago he had seen a coyote on the other side of the river barely a couple of hundred yards away.  Circumstantial evidence but I thought a fairly probable explanation. 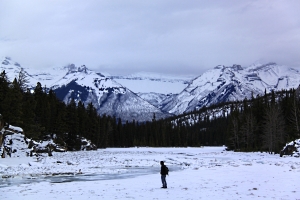 Australian diamond miner on the ice below Bow Falls 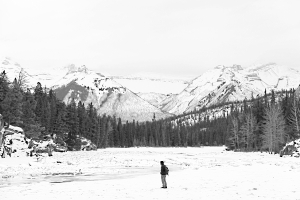 Because of the problems with contrast I did a quick pencil sketch. Well, OK, I used the photo manipulation software

It served as a reminder that the wildlife in the Rockies is …. wild.  There are big things out there which kill and eat other big things.  Of the larger predators, as well as coyotes and wolves there are cougar, lynx and wolverine as well grizzly and black bears, the later thankfully hibernating at this time of year.  There are many deer and elk and a remaining few caribou so it should really come as no surprise that there are freshly killed carcasses around.  It’s just that they aren’t usually so highly visible.

A few minutes later I passed a small group of deer partly concealed in the trees.  Coming back into the town I passed a deer wandering around gardens looking for nourishment.  Banff is part of the National Park, the oldest in Canada, and so nothing is done to stop the deer wandering where they want.  The problem is that they then attract predators which would just as likely attack a dog or a cat …. or a person. 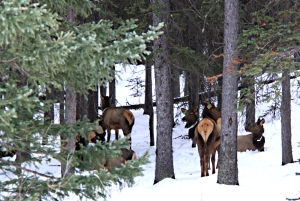 Deer barely concealed in the trees 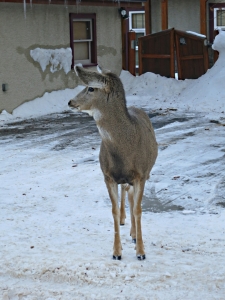 Deer wandering around the gardens and parking places within the Banff

Possibly the most dangerous is the cougar and there are many reports of cougar attacks including in 2011 on Tunnel Mountain where I went in the afternoon following my ramble along the rivers.  Thankfully I didn’t come across any cougars and I persuaded myself that the large paw prints I saw in the snow towards the summit were those of a dog and not a wolf.  Why would a wold be up there?  Easier pickings down at river level.  Also, they were too big for a coyote.  I know, I saw coyote prints on the Hoodoos Trail on the south side of Tunnel Mountain in 2011. 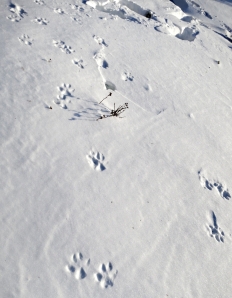 Need to check out the footprints around here!

Considering the huge number of people who come to the Canadian Rockies for outdoor sports including skiing, hiking, climbing, biking and canoeing such attack are very rare.  There have been only 3 fatal cougar attacks in the whole of North America since the turn of the millennium, only one of those in Canada, though that was in Canmore just outside the Banff National Park boundary.  I don’t know what the overall figures are but I would be amazed if the number of people killed by predatory animals is not far less than those killed in car accidents.  Perhaps I had better stay off the roads and stick to the trails.  They are  a lot safer.