There are few things more boring than listening to/reading someone blarting on about how great a time they are having when you don’t know the place and the reality is denied by distance and experience.

I had a great time on Friday, walked a long distance in the mountains in fabulous weather.  But I’ll just focus on what was new.

The plan was to walk across the island via the caldera to the crater-rim village of Nikia and then explore an abandoned village and climb up to an old windmill on top of an adjoining mountain before the walk back.

It all went well.  I won’t bore you with the details but just to make the point that it was about 20 kilometres with close to 1000 metres of ascent.  I’m getting fitter and enjoyed making rapid progress.  I got to Nikia and a welcome frappé in 2 hours

From Nikia I continued on for the real objective of the day, the abandoned settlement and the old mill just below the village to the west, again on the rim of the caldera.

Stone pillars at the entrance to one of the living spaces with sterna and stone bowl, threshing circle on the roof, and the mill behind

Entrance to the house, ‘1920’ carved in the stone lintel 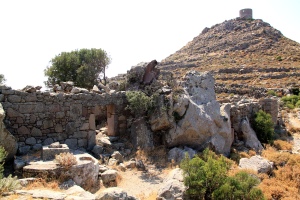 Sterna and stone trough outside the settlement walls 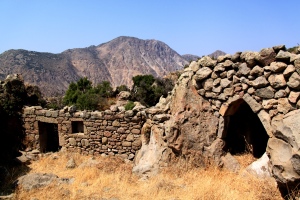 Entrance to one of the larger houses with a small ‘porch’ 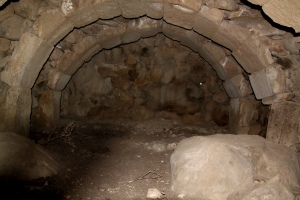 The settlement gives the impression of being very old and probably much of it is.  Each house is a single room which is stone-built, of barrel-arch construction with an earth floor and either soil over the top or a threshing floor on the roof.  Sternas (water tanks) are buried under the buildings and the terraces in which they are set with a small covered hole on top for drawing water.  Despite the appearance of great age there are dates over some of the door thresholds presumably indicating date of construction, the most recent I saw being 1920.

There are very many terraced houses in Britain considerably older than that with 2 reception rooms and a ‘scullery’/kitchen, 3 bedrooms, indoor bathroom and piped water and electricity.  And windows!!  I don’t know about the settlement I was looking at but certainly some of these houses were only abandoned post WW2.  Many of the inhabitants would have moved off the island as they saw their agricultural livelihood collapsing with increasing drought rendering the rich volcanic soil unproductive.  The remainder would have moved to Nikia on the crater rim or down to Mandraki on the coast.

The climb up to the mill wasn’t difficult despite the fact that any path there might have been is long since overgrown with aggressive vegetation.  It had been very windy for most of the previous 3 hours of walking but around the mill it was necessary to bend double to avoid the danger of being blown over the edge of the precipitous drops.

The mill itself was of mild interest and had been fairly recently refurbished with a new concrete floor at the top and a rickety ladder to climb up onto the roof.  The views from up there were breathtaking.  Or was that the wind?

The abandoned settlement seen from the top of the mill

Nikia from the top of the mill

The craters seen from the mill

Zooming in on the Stephanos crater

Yet another long, hard walk on Saturday so I think  a more relaxing Sunday is called for.

This entry was posted in Greece and tagged Greece, Nikia, Nisyros, Volcano. Bookmark the permalink.