I feel a right long ramble coming on  here.  So if you read the blog, be warned.

Many years ago when I started work as a town planner with Monmouthshire County Council (the proper Monmouthshire, not the present vestigial pretension.  The one which used to be ‘Wales and Monmouthshire’) my far-sighted boss told me to spend a few days driving around the county to familiarise myself with it.  There are a few things which I still remember vividly from that 3 days of paid fun ‘exploration’.  One was driving into Ebbw Vale when they were oxidising the blast furnaces in the steel works, the whole town enveloped in a pall of thick orange smoke, and seeing an advert on the gable end of a terrace of houses proclaiming “ Persil washes whiter”.  Another was driving up the steep hill into Bargoed from Aberbargoed on the other side of the valley and seeing ahead of me the Bargoed Emporium.

Fast backwards to many years before, I don’t know how many, when the inhabitants of the small harbour village of Palloi on Nisyros got fed up with being raided by pirates and so moved uphill to the crater rim and called their new settlement Emborios.

Friday, and I decided just before I walked out of the door that I was going to walk up to Emborios via the spectacular direct route from Mandraki which climbs the rim of the  Kato Laki caldera, then follows the inside rim of the main Laki caldera and from Emborios drop down to the harbour at Palloi.

It’s a great walk both to and from Emborios but the path down to Palloi I had failed to find twice in previous years.  The first section of it is, for the most part, a very clear, stone paved kalderimi.  Then it intersects the modern tarmac road and beyond that is bandit country, wild and unkempt with paths blocked by fallen trees and collapsed stone walls.  Much like the walk into Argos on Thursday. But it was the success of the foray into Argos which fired my optimism.

My reasoning was that the original inhabitants would have needed a well established route from the coast up to their new lair if they were basically a trading people and so there must have been a decent path at one time.

Cutting a long story short, the tactic which I employed in Argos worked a treat on the second part of the drop down to Palloi: namely, when the walled path gets blocked climb up to the terraces alongside and follow the path at a higher level and drop down again when possible/necessary.  BUT FOLLOW THE LINE OF PATH.  Great success!  I kept to the path, which doubled as a stream bed for much of the way, including a 20 foot high dry waterfall, all the way down to the coast west of  Palloi.  Triumph!  Elation!

Instead of turning east to go to Palloi and then back to Mandraki I turned west to get onto the foreshore on the far side of an amazing geological formation.  There are high pumice cliffs with a rising line of shallow caves culminating in a headland of lava protruding like a clam shell into the sea.  I had recommended that section of coast to someone else but am glad they didn’t follow my advice.

The path has always been across loose pumice scree, about as unstable as you can get scree.  This year the winter storms have rendered it almost impassable. Instead of a slightly compressed path of pumice the width of a foot (NOT a foot/30 cms wide!) there is now the barest indication of a line across it.  My first attempt to climb up to a line to follow dislodged a lava boulder nearly a metre cube which I had thought pretty solid.  I got my leg out of the way just in time and tested every single embedded rock after that. The only way to do the traverse was with my chest to the cliff to minimise outward pressure on the loose slope.  Exhilarating!

Photos are very poor I’m afraid because it was the end of the afternoon and the whole cliff face was in deep shade with the sun behind.  Just a couple to give an impression.  I need to go back in the early morning. 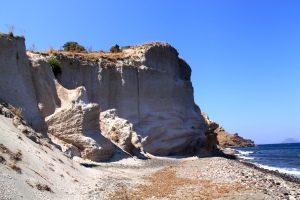 Close up of the pumice cliffs 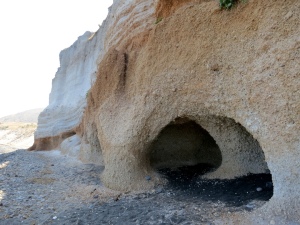 One of the shallow caves 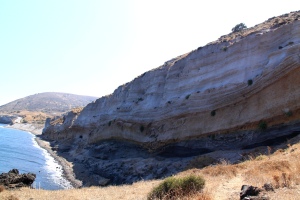 The rising line of caves

The lava clam shell with the sun behind 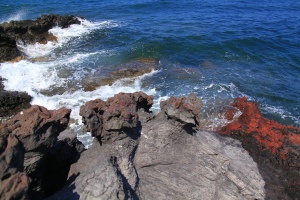 The edge of the lava as it dips into the sea

Once I dropped back down from the top of the lava clam shell it was a pleasant amble along the side of the beach to Palloi.  This is the only place I know where in September there are many clumps of sea daffodils in full, very dramatic flower, thriving in the sandy pumice soil.

I wish I could grow peppers like that in my garden

Another digression.  Hippocrates, he of The Oath, lived, had a clinic and taught medicine on Kos.  One of his cures/remedies was to send patients for treatment to thermal springs ….. on Nisyros.  It is thought that one of the places his patients came was Palloi which has a thermal spring in a cave behind an ‘underground’ church.  It is known to date back to Roman times and probably much earlier.  Small but fascinating. 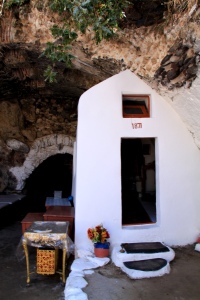 The thermal spring in the cave at the back

I’m amazed that despite the fact I have spent a lot of time on Nisyros, the stuff I have already seen on previous visits is so dramatic that it still quickens the pulse, still has that ‘Wow!’ factor.  As well as that, every day so far this year I have seen new stuff I haven’t seen before.  How good is that!!