Nisyros: Lava landscapes and making a living from a volcano.

Wednesday I had decided to go off the page and into the past.  Thursday I had got a taste for it.

Parts of the island are very little explored now despite the fact that once they were densely populated and so served with ancient footpaths.  The route I walked on Wednesday between Siones and Evangelistra is one such and is only glimpsed from the path to the top of Oros Diavatis.  Another unexplored area, known as ‘Argos’, and can be clearly seen from the dirt track leading to the monastery of Stavros, spread out expansively stretching down to the coast far distant below with Agia Irini on a small headland way to the south.  The information sheet ‘Geotrail 6’, which I had bought from the Volcanological Museum in Nikia, gives a very brief description of the area and shows the outline of a route albeit on a tiny scale.

So that’s what I aimed to do, explore Argos and try to find the geotrail.

The first part of the path is a paved kalderimi and clear to follow, if somewhat covered in loose stones and gravel.  But as it drops down it becomes increasingly awkward, in one place completely blocked by a shed-sized rock, obstructed frequently by overhanging trees, in many places obstructed by long-dead trees, victims of drought.  The path was mostly easy to spot, contained within stone walls which had collapsed onto it,  distinguished it from the surrounding terraces which were surprisingly clear of stones and invasive vegetation.

The beginning of the kalderimi down into Argos

I persevered for about 45 minutes.  Then, at the top of a deeply incised canyon, I had enough of walking bent double under dead overhanging branches of olive trees killed by marauding goats, stumbling over loose rocks, so I struck off along one of the terraces following a clear goat path.

From then on the walking became pleasant and considerably easier.  I knew where I was heading and simply picked goat paths which took me in that general direction.  It was fascinating.  As I meandered down through and along terrace after terrace, passing dozens of abandoned single-room stone houses it struck me how many people must have lived here to maintain all this infrastructure and farm the terraced fields, all obviously worked entirely by hand. Some of the dwellings are thought to date back to Neolithic times, others to the first part of the 20th Century.  Closer to the coast there are tunnels or galleries cut into the rock to disguise them from pirates who roamed the seas round here.

Inside one of the houses, wooden plough which would have been used on the fields outside

Threshing circle on the roof 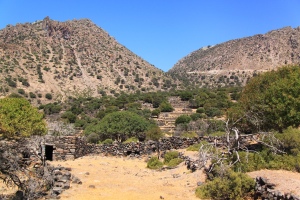 Closer to the coast different volcanic rocks used in construction, lava outcrops on the mountains behind

Nisyros had the reputation of being at one time the richest agricultural island in this part of the Mediterranean and that would have been down to the richness of the volcanic soil.  Terraces stretch up to the tops of mountains, houses are built under the terraces to conserve the land for farming, threshing circles are built on rooftops.  The volcano supported a large agricultural population.  My guess is that there was a dramatic shift when the climate changed and there was nolonger enough water for the crops or the population.  The population would then have moved out in search of an easier life, or just plain survival.

The history of the area was fascinating but so too was the landscape.  Wherever possible much of the land has been formed into terraces for farming but everywhere there are huge, spectacular outcrops of lava on the jagged mountain and down into the sea.

One of the lava outcrops high on the ridge 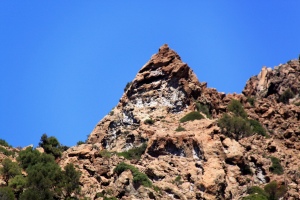 Lava outcrops in the sea 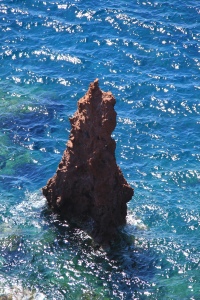 Approaching Agia Irini there is the reminder of yet another way in which people made a living from the volcano.  Perched on a headland looking out towards Tilos is the remains of a building which would once have housed some the workers in the sulphur exporting plant at the tiny harbour below.  Built in 1879 it piped sulphur out of the crater over the rime of the caldera and down to a small processing plant at Agia Irini.  It was then exported to other parts of the Mediterranean for treating vines to prevent disease.  It lasted in operation only 10 years but the remains are still there, stark reminders that industrial dereliction is found in attractive locations too.

From the coast the rough track from Agia Irini crosses and recrosses the pipeline until it reaches the rim of the caldera and then drops down into it. 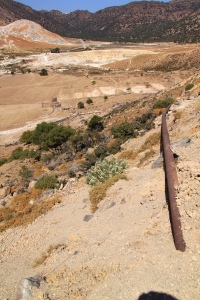 The sulphur pipeline climbs out of the caldera

I stopped for a frappé in the taverna at the edge of the crater with its coach park and bits of sulphur and obsidian on sale, and mused that most people think that the only way that money is made out a volcano is from tourism.

A long and tiring walk but good pay-back on the effort.

This entry was posted in Greece and tagged footpaths, Greece, Nisyros, rambling, Volcano. Bookmark the permalink.