Nisyros: off the page and into the past.

Wednesday I decided to go off the page and into the past.  It kind of fitted the book which I’m reading, ‘The Eyre Affair’ by Jasper Fforde in which fiction and time are fluid and therefore changeable.

First off I went to the Paleocastro (meaning ‘Old Castle’ or ‘Fortress’) which is mind-bendingly massive and dates back to at least the 5th Century BC.  We first came to Nisyros in 2001 on a day trip on a hydrofoil from Tilos.  After a quick bus trip to ‘The  Volcano’ which blew our minds, rather than spend the remaining 3 hours looking around trinket shops before the ferry back, we chose instead to explore the winding , narrow streets of the town and, finding a footpath, decided to follow it because it went  ‘up’ (again that urge to get to the top of something).  It led to the Paleocastro and we couldn’t believe our eyes, the whole place was just massive.

It has been a ‘must visit’ ever since.  Normally the first thing we always did on arriving on Nisyros but this time I had decided to ‘save it for later’.  Wednesday was the day.  It was to be a trip into the past and the Paleocastro was en route.

I still take photos of it.  Always trying to capture the essence of it a little more.  A symptom of Repetitive Photo Syndrome stretching back more than a decade.  I nostalged and clicked away for nearly an hour before continuing on up into the mountains to the next destination, the ancient monastery of Siones.

Main entrance to the Paleocastro. Each stone block is about 1 metre high

The only map I know which shows the location of Siones, or the way to it, is the diagrammatic but latitude/longitude referenced map prepared by a German couple,  and made available free of charge both on the island and on the internet.

Like the Paleocastro, visiting Siones is like being in a time warp.  It a small complex of tightly enclosed buildings clustered around a tiny multi-level courtyard or ‘Avli’.  The earliest construction was obviously built onto a cave before it was added to and fortified.   I don’t know how old it is but the frescoes in the church are said to have been renovated in 1733.   The last couple of years the church has been in a very sorry state of repair with significant water damage from a cracked and leaking roof and evidence of rats having taken up residence.  Very pleased to see that the roof has been repaired and the detritus and rat mess cleared from the inside.  The frescoes are damaged but with the repaired roof hopefull will not experience further deterioration.

The inside of the church

Part of the frescoes

Inside on e of the dwellings: note the IKEA style storage unit next to the fireplace

… and looking the other way

The map also shows a route between Siones and Evangelistra but indicates that there is no path.  Too right!  There are ancient agricultural routeways which have fallen into disrepair and in many places are blocked by aggressive vegetation.  BUT there is no path.  It’s a great walk.  Climbing up and then dropping down through ancient stone-built terraces the world outside is another planet, another time.

The route goes through two ‘valleys’, neither of which is a valley but really old caldera/craters which are nolonger active.  Initially the route picks a way climbing up to the end of the caldera which Siones sits in and then drops down steeply and dramatically into another, larger one.  Between the two is a clear ‘watershed’, except it isn’t water cut, it’s the boundary between the two craters and the rim is marked by a stone wall dividing the ancient agricultural terraces on each side. I couldn’t help but wonder how many people these terraces were home to when they were farmed.

The only indication that either caldera has been visited in modern times are metal signs saying ‘Hunting is Forbidden’ (in Greek of course), the bullet holes in the signs, and the shotgun cartridges scattered about.  The only way in or out is on foot and that is becoming increasingly difficult despite faded blue spots which someone put to trace a route.  I think I might buy a pair of secateurs and revisit just to make life a little easier for time travellers.. 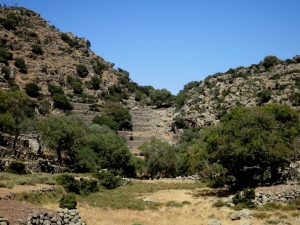 The map of Nisyros showing Siones and the route to it and onward to Evangelistra:  http://www.bjfranke.privat.t-online.de/nisyros/map/wk-e.htm