Nisyros: the unusual and surrealistic

After two weeks of pretty intense walking every day in the mountains I decided that this Sunday was going to be a day of rest.  The decision was unanimous, if only because it was  unilateral.  For once I was absolutely sure that I needed a day-off from strenuous exercise  and  so I set out my day accordingly.  I only covered about 10kms.

Unfortunately I find that I can’t ‘amble’ anymore so I shot at fairly high speed up to the tiny church of Panagia Faneromeni about 4 kms from the town in the foothills of the mountains.  It’s a stone-built basilica type structure, one of a kind here on Nisyros and recently renovated.  The door was padlocked so I couldn’t go inside but sat on the step outside in the shade for a time of quiet.  Very peaceful.

Then I climbed up some great chunks of volcanic rock nearby to get a better perspective for photos and while down-climbing took the skin off my shin …. again!!  It’s similar to the “grass is always greener on the other side of the hill”  mentality.  I suffer from “the best photos are always from a vantage point you can’t quite get to” syndrome.  I’ve got the scars to prove it.  And a few slightly better photos.  The spot where I did it can be easily identified as the air surrounding the rock is very blue and there are expletives and exclamation marks trapped in the thorn bushes.

I always carry a pretty comprehensive first aid kit so was able to staunch the stream of blood and effect a repair but it will ruin the tan on my leg!  To facilitate the ‘staunching the flow of blood’ bit I climbed up another rock, ate a banana and lay on the top in the sun with the injured limb elevated for half an hour.  Sometimes it just has to be done!

I wasn’t so much feeling sorry for myself as cross and grumpy.  The worst thing is feeling stupid for doing it in the first place.  A guy I used to canoe with painted on the underside of his canoe “I know I’m upside down!” for when he capsized in rapids and was slow rolling up again.  I’m thinking of ordering wound dressings with “I know I’ve cut my leg” printed on them. 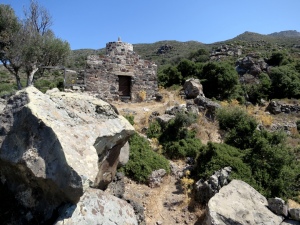 …. and from the top of another rock. The Paleocastro is on the headland in the distance

The Paleocastro fills the entire width of the headland 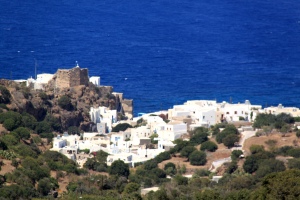 View down to Mandraki

One of our old haunts there is around the far side of the site where the very old fortifications are built into and on top of the huge volcanic rocks.  It’s not on part of the built pathway in Paleocastro but there is a rough path to clamber down to a very pleasant area by a large volcanic outcrop where you can sit on smooth rock slabs in total peace and quiet to appreciate the stillness and the history.  They blocks are not cut neatly and precisely as the ones in the main part of the fortification, being mostly large natural but very rough boulders almost like large-scale clinker out of a blast furnace.  They go back to a much earlier time in history.

I got back to Mandraki about 16.30 but, because of a stupidly acquired hole in the shin I didn’t go for the customary swim.  I have become a very loosely acknowledged part of a small group of people of a certain age, all locals except me, who go for a dip from steps at the side of the ‘town beach’ about 16.30-17.00 every day.  Today I hunched down in the exceptionally comfortable armchairs outside a nearby taverna, sipping a frappé and watching the faithful take to the waters, hoping that they wouldn’t spot me playing truant.

I don’t usually mention the evenings because they are much the same.  Meal in Irini’s restaurant in the main square followed by an ouzo nightcap in a taverna on the seafront ‘Heroes’ Square’, both very laid back and pleasant.  Last week there was a performance by a dance and music group from the island of Leros in Heroes’ Square.  Very enjoyable.   This Sunday there was a showing of ‘Zorba the Greek’ projected onto the side of a house at the side of the square.  It was the original version with Greek or English subtitles as appropriate to the language spoken.  Given that there were scooters and 3-wheel vehicles buzzing around and that there was a soccer match on the TV in the taverna the subtitles were very useful.  Surprisingly I could follow much of the Greek subtitles.  A truly surrealistic evening to follow a very unusual day.

This entry was posted in Greece and tagged Greece, Mandraki, Nisyros, Paleccastro. Bookmark the permalink.