Kardamili: in and around the town .. and the Viros Gorge … and some villages

I set out on Friday with the intention of doing a moderate walk and focusing more on looking for photo opportunities.  I reckoned that my usual mentality when I’m doing a long walk is to focus on bombing along single-mindedly in order to make sure that I get to where I’m going and then finish in time for a good swim and a laze in the sun to dry off.  And a frappé on the beach.  By doing this I reckon I miss lots of interesting stuff.  So Friday was to be different. I was going to be more conscious of my surroundings.

In particular I wanted to try to take photos in Kardamili itself as I was conscious of the fact that the only photos I have taken in the town were of the old derelict olive processing plant.  I’ll be moving on on Monday so it was time to look a little more closely.

Thoroughly enjoyed it.  Didn’t cover a huge distance, a mere 16 kilometres but I was ready for my swim by 16.30. A good result.

By coincidence, the next section of the Claudia Hammond ‘Time Warped’ book which I read over my early evening beer was to do with developing the technique of …. looking around ourselves for new and interesting stuff.  By doing so we  enrich our memories and time spent appears longer and more worthwhile.  It’s something I tend to do as a photographer anyway but need clearly need do more of.

It is inevitably the case that a path which we haven’t walked before reveals things which are new and hopefully some of those things are interesting.  The challenge is to find something new on paths walked many times.  Initially all the paths I walked were ‘new’ but I have been on ‘new’ paths or sections of paths every day since I have been staying in Kardamili.  Friday was no exception. As a number of times before I walked up the bed of the gorge, stopping to take photos on the way, to a point where I had seen a sign to Aga Sofia and took that path.  Very good path it was, offering new perspectives on the gorge and in particular on Lakaki monastery.

Nothing really stunning emerged but it was very satisfying to spend time looking more carefully rather than flashing past. 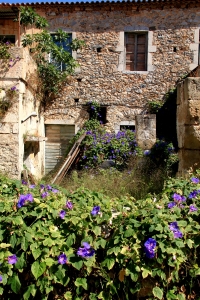 The colours in the walls of the gorge are sriking 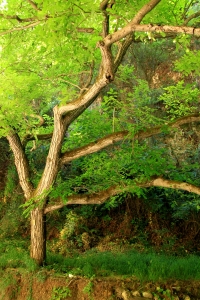 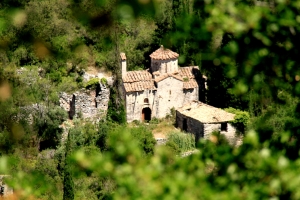 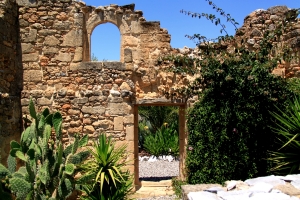 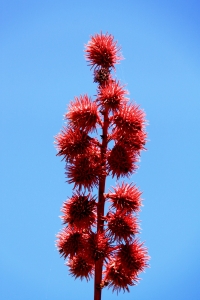 Underneath the olive trees 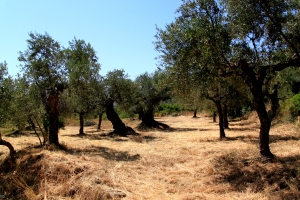 Hay cut back under the olive trees

Old building in the centre of Kardamili

The other half of the same building is somewhat more ornate 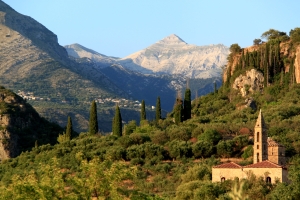 The evening light on Old Kardamili and Profitis Ilias

The sun finally sets on the day