Kardamili: Viros Gorge, Likaki, Tseria – looking back to the see the future

I did another longish walk today, about 20 kms, once again up to the village of Tseria but via a different route.  Much, though not all, of the route was new to me but the over-riding impression of the day was to do with perception of time.  This was not only to do with the book I’m reading”  (‘Time Warped: unlocking the mysteries of time perception’ by Claudia Hammond)which has got me thinking but also a ‘chance’ conversation with a Manchester couple in the ‘Gorge Hotel’ taverna.

Snide aside here: there is a much higher probability of a conversation with someone from the North of England than anyone from the Saarfeast of England who generally regard anyone they haven’t been formally introduced to as not worth passing the time of day with.  Apart from which they often caint toke propa or have their mouths stuffed with bankers bonuses and so are difficult to understand.  Snide aside finished.  I generalise for effect, they aren’t all like that.

I set out up the bed of Viros Gorge again with the intention of going back to the Likaki monastery and then following the footpath from there up to the rim of the gorge.  I had failed to find it when I was coming down and was working on the principle that if you can’t find a path from one end, try it in the other direction. 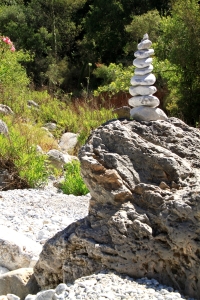 It worked a treat.  The path was clear, if a little overgrown in places by maqui.  Reaching the top I was surprised how close I had been to finding it originally.

But the overwhelming thought as I headed upwards was that this was an ancient pathway which must have been trodden for centuries. It linked the Likaki monastery with the village of Kalines on the rim of the gorge.  And the theme of Greece’s long history persisted through the rest of the day.

I wound my way up connecting paths to Pedino and then to Tseria where  I had a bottled juice in the local, very laid-back, kafeneion. My guess was that it hadn’t changed since before WW2.  As I walked back through the village towards the path leading down once again into the Viros Gorge I passed the village church which had a number of ‘picture stones’ set into it.  The present church structure and the stones dated back to 1826 though it would not be surprising if there had been an earlier church on the same spot.

High up on the bell tower 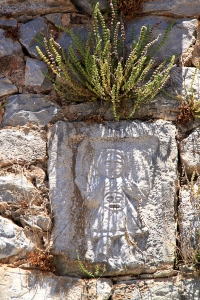 Just can’t fathom the symbolism of some of the carvings. An angel with a gremlin in the belly? 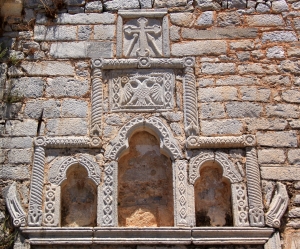 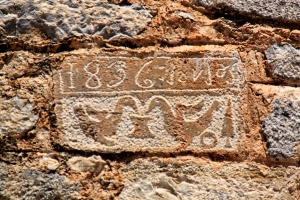 This one dates the current church structure

I had to hang over the edge of the path to take this photo. Still no idea what the creature is. Some kind of dragonfly?

From there and a climb up to the taverna in the ‘Gorge Hotel’ in Kolibetseika on the rim of the gorge.  This was the third time I have walked to it and the view from the terrace is still breathtaking.  I fell into conversation with the only other customers there, a couple from Manchester.  We agreed that the view would difficult to beat, how pleasant it is to have the warmth and the sunshine, and agreed also that the sense of history which is everywhere in Greece is one of things which makes the country special.

Which brings me back to the main theme and the Claudia Hammond book.  She concludes the 5th chapter with the view that: “our concept of the future is tied up closely with our perception of the past”  and makes a convincing case in support of the thesis.  She also quotes Churchill as saying: “The longer you can look back, the further you can look forward”.

Hammond applies this concept at the personal level but I can’t help thinking that it also applies culturally as well.  Despite all its failings the ‘Old World’, Europe, has got ‘history’ in spades over the ‘New World’, the ex-colonies which are now part of ‘Western Culture’.  Without exception that I can think of the ‘New World’ countries have almost completely destroyed previous cultures.  And in Europe nowhere has more sense of history than Greece.  It’s everywhere: in the ancient monasteries; ancient settlements; old pathways; as well as the vast amount of extant remains going back beyond the Christian era.  And there is a cultural connectedness to that sense of history.  So if Hammond and Churchill are right, there should also be an ability to see further into the future.

I certainly hope so.  It will be needed.

The walk back down to Kardamili from the Faraggi (Gorge) Hotel was once again a pleasure and I had to discipline myself to not keep stopping to take photos.  The route I chose back down was the one which I had worked out would give views down to the Likaki monastery near the bed of the gorge.  It did.  And that closed the circle. 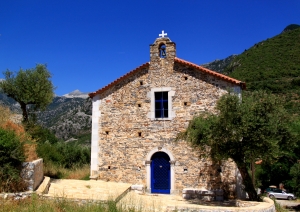 The church next to the Faraggia Hotel/taverna. The mountain Profitis Ilias in the background. 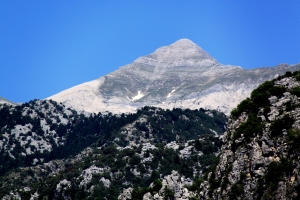 Zooming in on Profitis Ilias: the patches of snow are still there

Looking down to Likaki momastery