Kardamili: bats, belfries, frescoes, gorges …. and on the edge!

Very sober thinking as I set out for my walk on Saturday.  For a start there was a raging argument going on in the coffee shop across the road when I got up, and they weren’t debating England’s 3-2 victory over Sweden the night before.   It was still continuing when I went there for my caffeine fix.  Political passions run high in Greece and rarely more so than now. 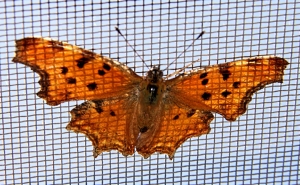 Mesh covering on the windows designed to keep bugs out, also keeps them in. This guy seems to have come in to shelter from the political storm

I had planned to blast the Viros Gorge (metaphorically not actually) by walking back up to Tseria at 600 metres and then get as high up the gorge as I could on footpaths and walk back down the bed of the gorge, circumnavigating waterfalls as necessary.  But for some reason it didn’t gel in my mind. Couldn’t put my finger on it but it just seemed wrong.

So instead I put together a route on paths I had already walked but in different combinations.  I must say that both at the doing and with hindsight, it worked for me.  Very interesting, satisfying … and sobering!

I walked 20 minutes along the road and then up the very good kalderimi to Proastia once again.  There is something very appealing about the village.  There is the Byzantine Agios Nikolaos church in the centre with its 12th Century core, today with no parked cars getting in the way of composing photographs.  There is the tiny back-alley taverna with good frappé and iced water at €1.20.  Very laid-back, chilled place.  There seems to be no concession to tourists, it’s a ‘locals’ village.  I stick out like a sore thumb but that’s only to be expected given my rucksack, camera and walking clothes (M&S shorts, bright red Decathlon sleeveless T). 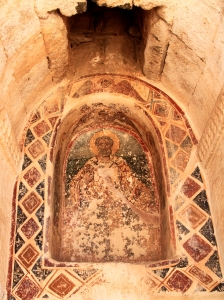 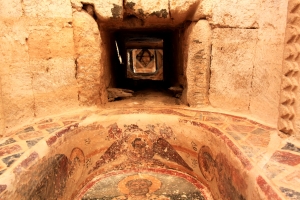 Looking straight up the tower …. devoid of bell

The seriousness of the day, another indication that Greece is on the edge, was evident when I sat down for my frappé.  Two elderly guys, clearly lifelong friends from the village were having their customary morning ‘elliniko’ (Greek coffee) and were arguing furiously about the election tomorrow and the merits or otherwise of the political parties.  It seems that a general and powerful apprehension about the future is heightening the emotion of a traditionally volatile people.

My onward path crossed a stone bridge over the Noupadi Gorge, narrower but just as deep as the Viros Gorge, and then hugged the southern rim of the gorge before zigzagging down to a convenient crossing point and climbing up the other side.  Significant delays on this section of path while I crept around aggressive vegetation with the camera poised, determined to get a reasonable photo of one of the large dragonfly-like creatures which flit around neurotically and move whenever you get close.  In the end I gave up but hope someone can identify what I was looking at from what I did manage to photograph.

Sometimes they fold their wings completely 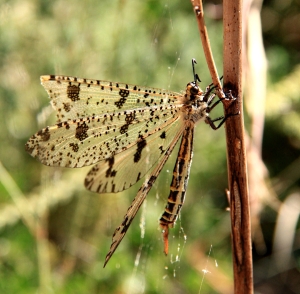 Sometimes they stay ready for flight

I stopped to have my banana and nutbar, and a very good swig of water, sitting on the doorstep of one of the many tiny ‘family’ chapels set along the paths and in the olive groves.  It was the first decent bit of shade I had found for a while and very welcome. I stuck my head inside as I often do and found within the miniscule interior were not only extant frescoes in reasonably good condition but also a small group of bats.  One advantage of a fairly high resolution SLR camera fitted with a good zoom lens is that you don’t need to get up-close and frighten timid wildlife.  So I took a couple of shots and left.   A bit of a highlight this. 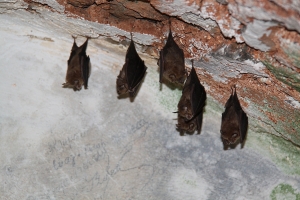 Having crossed the Noupadi Gorge and navigated the olive groves on the shoulder of the mountain I reached the ‘large’ village of Exochori and had a very good and very welcome fresh orange juice in the ‘Taverna With a View’ (‘με θέα’, rather than ‘με θεά’ which would be a taverna with a goddess) before the last leg of the trip down into the Viros Gorge. 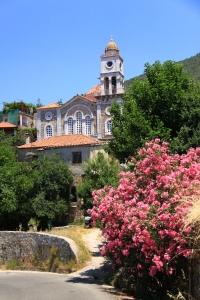 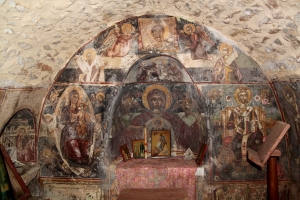 Another of the small family churches

One of many ‘investment opportunities’ advertised for sale ….. but not just at the moment

I must be honest, part of my choice of route today was to re-visit the rock-pinnacle-top tiny chapel of Agios Giorgos.  At least, that’s who I think it is dedicated to given the number of pictures of himself slaying a dragon (I might have written that before … apologies!).  It really appeals to me because of the sense of exposure at the top.  Vertically straight down bare rock!!  It’s the only place I’ve managed to get to in the Taigetos where the rock has been razor sharp. Very reminiscent of parts of Symi though a lot smaller in extent.  The height difference between the top of the pinnacle and the bed of the Viros Gorge alongside the Lakaki monastery, almost straight down, is 285 metres.  I know, I checked my altimeter.  In fact I got part way down and then climbed back up to the chapel because I had forgotten to check the altitude: 370metres ASL at the top.

I repeated a photo I had taken last year on Amorgos to demonstrate the exposure of the place: a foot on the edge of the abyss looking straight down.  In fact I did it looking in both directions, up and down the gorge.

On the edge looking downstream 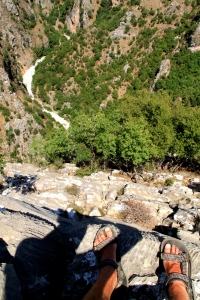 On the edge looking upstream

….. and just to show the sharpness of the rock

That was when the somewhat clumsy allegory hit me.  Greece is today on the edge.

In or out of the Euro? Experts vary in their opinion as to what should happen, nevermind what will happen.  Too many pontificate with hindsight: “Greece should never have gone into the Eurozone in the first place”; “The country should have exited gracefully in 2010” when the present crisis hit.  The issue is: what should the country do now! It’s not like a computer where you can hit ‘back’ or ‘delete’ and pretend the mistake never happened.

In a sense it’s unrealistic to expect the country to vote effectively on Sunday.  The issues are far too complex even for the great financial minds of Europe never mind the ‘atoma’ (person) in the ‘odos’ (street).  How a vote is cast simplifies down as it always does, to political preference and to one issue for each person but in a sense I guess it boils down to: “How can I best preserve my way of life?”  The answer is that the only ones who could really do anything about it are pulling the strings to protect their way of life …. and stuff the rest.  By all accounts (pardon the pun) wealthy Greeks are already moving their money.

Greece is most certainly on the edge.  Some pundits reckon that if Greece leaves the Euro zone the austerity measures will be like a walk in the park for a number of years until the economy finds its equilibrium in the world.  But arguably so is Europe as a whole on the edge and possibly even the global economy.  Being brutally frank about this, it could well be that the only winners in the long run will be the emerging economic giants of China and India which doubtless are already protecting their interests in the face of confusion and possible meltdown in the EuroZone.

It all seems crazy given that the multinational corporations which are dominant in Greece, as elsewhere in the world, and are even sponsoring the European Cup (including CocaCola),  each have economies far bigger than that of Greece.  There are many individuals, some of whom are Greek,  whose personal fortune is far greater than Greece’s debt.  How can this be right?

Greece is on the edge most certainly.  But a positive factor.  Greece beat Russia 1-0 in the Euro cup.  A very good end to Saturday indeed.  It may inject optimism into the elections on Sunday.

1 Response to Kardamili: bats, belfries, frescoes, gorges …. and on the edge!