Nisyros: there’s a footpath here but where does it go?

I really needed an easy day on Monday.  My legs were beginning to ache a bit by the end of the longer-than-expected walk on Sunday.  Part of problem with walking somewhere for the first time is that you don’t know how arduous it will prove either in distance or the condition of the route.  That was one of the reasons we kept coming back to the same islands after Enfys became ill.  We knew the paths and could judge each day how strenuous or otherwise we wanted the walk to be.

I woke at 07.00 Monday morning as usual.  Sun blazing from a cloudless sky, wind howling around the balcony, dark blue sea speckled freely with racing white horses.  So I thought: “no ferries or trip boats today, I’ll hang around the town and take pictures of wild seas”.  A Plan!

I’ve said many times before, plans have a habit of not working out.

The island’s public WiFi connection was still malfunctioning so having completed the text of the blog I went to the internet café on the seafront and cowered inside away from the wind and the spray to post the blog, check e-mails, bank account and so on.  Then, camera in hand, I headed for the harbour.  The sea was certainly wild, lashing up over the sea wall.  The small ‘sheltered’ swimming beach was heaped high with piles of seaweed washed ashore in the storm, waves crashing down where there is normally scarcely a ripple.  The sea was throwing up spume (I think that’s the technical term) anything up to 20 foot high as it hit the harbour walls.

Trip boat on its way into the harbour

Amazingly there was one trip boat already in the harbour and two more on their way.  A quiet day in the town was not an option.

Once again I headed for the mountains with a very late start.  I wanted to find and follow a path the start of which is shown on one map of the island and which I think carries on down to the coast.  Bad move in terms of an easy day because once again I was committed to an uncertain path.

Long story cut short.  The walk was even longer and more strenuous than yesterday’s but yielded some interesting insights into a previously unexplored part of the island.  At least it was unexplored by me, many others had been there before as evidenced by the old settlements and long derelict kalderimia, in some places rough-paved and flanked by walls on either side.

Semi-detached not so suburban. In need of some repair 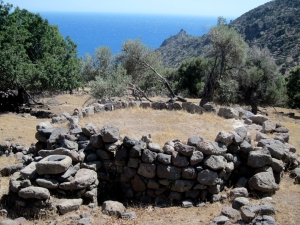 Threshing circle with covered sterna to the left ...... 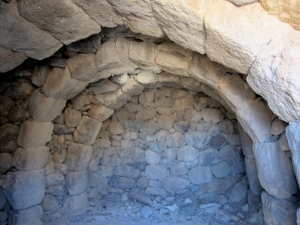 .... and underneath the house, in pretty good nick for its age

An arch is all that remains of some

Change the shape of the arch and you've got a church

I got down pretty close to the coast but then time was running out and so was the remnant-path.  Eventually it seemed to peter out in a large area of terraced fields.  I didn’t want to risk losing it because it picked the way back up to the col and I didn’t fancy fighting my way up overgrown terraces as an alternative.

But I got to photograph what I think is a dragonfly.  Very difficult grovelling down in the scrub and focusing on something about 5cms long and nearly transparent.

1 Response to Nisyros: there’s a footpath here but where does it go?