I finally had my quiet day today.  I walked just over half the distance I covered yesterday.

The island’s internet was working but not very well, everything very slow so I ambled down to the internet café on the seafront.  They had put screens up on two sides of the outside seating area because of the wind and the spray but the cafe hadn’t opened when I got there at 09.45.  I guessed they would open at 10.00 so I went for an amble and then came back.  Having done the necessary with the internet I then dawdled over an espresso enjoying the early morning sun and the caffeine rush.

It’s amazing to think that in 2000 when Enfys and I first started coming to the Dodecanese (the group of Greek Islands of which Nisyros is a part) it was a choice between very poor quality ‘Nes’ or Greek coffee.  Nothing resembling espresso or cappuccino which were unheard of.

Greek coffee may be traditional, and I’m all in favour of keeping traditions alive, but Greek coffee tastes awful.  Even if you avoid the ½ inch of sludge at the bottom of the cup it tastes awful.  I don’t know many Greeks who drink it.  Dimitri who I met on Kalymnos last year reckons there is no way it can taste good because it is boiled.  Coffee should never be made with boiling water nevermind  boiled in a saucepan over a gas ring.  The saucepan, specially designed for the purpose, is called a ‘breeky’ which I have an unfortunate tendency to pronounce  ‘freaky’ much to the amusement of Greeks.  Anyway, back to the coffee.  In 10 years the situation has changed dramatically.  Most tavernas, kafeinions and restaurants now offer a range of coffees and often have a coffee menu.  And in most cases it is very good coffee.  I enjoyed my espresso in the sun this morning.  The mark of a proper lazy day.

Coffee break over it was time to lay in provisions.  Getting a supply of bananas has been difficult for the last few days. I suspect the reason is that the island’s ferry has broken down.  Of which more in a moment.  But one of the fruit shops had had a delivery today and very good quality they were too.

I added the Kindle to the bananas and nutbar in the top of the rucksack and ambled up to the Paleocastro where I ensconced myself in the sun on a rock, ate my dinner and read more of Bill Bryson.  Funny word ‘ensconced’.  Means a bit more than ‘sat’ but that’s what it boils down to.  To sit comfortably with no intention of moving.  And that’s what I did.  For an hour or so anyway and then I got bored with doing nothing and went for a walk.  That’s why it takes me an age to finish a book. That and the fact that I have a tendency to doze off when I’m inactive for more than 10 minutes.  Particularly in the sun.  I’m now still only 41% of the way through the Bill Bryson.  Kindle doesn’t do page numbers it tells you what percentage you have read.

I walked further up the road and then off on a thin path through rocks and prickly scrub to the tiny ‘basilica’ of Panagia Faneromeni.  According to the book on Nisyros which I fancied in the bookshop here about 5 years ago and Enfys bought me for my birthday, this church is the only one of its architectural kind on Nisyros, it having a central dome.  The church is thought to date back to the 11th Century and at the time the book was written (published 2001) it was described as in ruins.  It has now been renovated and the outside looks immaculate.  The inside is supposed to have the remains of frescos dating back to the 11th Century but it couldn’t be verified whether it had any frescoes at all as the door was firmly padlocked.  Surprising where you can insinuate a compact camera but no evidence of frescoes. 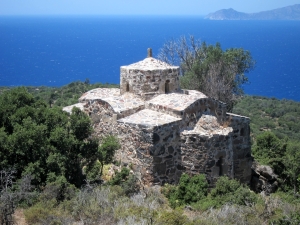 Looking down from Panagia Fanoremi to the Paleocastro far below

That broken down ferry?  I have booked my ticket on A Big Ferry from Kos to Amorgos on Saturday.  I had sussed this out on the internet before leaving home, confirmed it when I got here, and booked my ticket yesterday.  The plan had been to get the island’s ferry at 07.30 on Saturday morning which would get me to Kos town in time for the Blue Star at 12.15.  But the island ferry is broken and may not be repaired in time.  Nobody knows.  Plan ‘B’ means crossing to Kos a day early.

Gentle ambling around gives the brain more time to mull over things.  It’s then surprising what sometimes pops out of the subconscious and which you think “that’s just so obvious why hasn’t it dawned on me before”.  If I have to get the ferry to Kos on Friday that gives me just 2 more walking days to go on Nisyros.  And there at least 5 things I want to do!

What has happened to this last week????