Nisyros: Some things are just weird!

I certainly had an early start on Wednesday morning, though not initially in the way I had planned.

I woke some time between 06.00 and 06.30.  The uncertainty as to the exact time is that my brain is not really working effectively at that hour in the morning and in a caffeine-deprived state.  It sounded as if there were a lot of people talking loudly right outside my window which, given that I’m on the first floor seemed somehow unreal.

I should tell you that for the last nearly a week there has been a large group of students from University in Athens around the town practicing standing next to theodolites and measuring staffs (or whatever they are called, but they are now marked with bar-codes not numbers presumably for instant digital download into a computer programme) … or talking loudly on 2-wave radios.  They seem to work in groups of 10 or 15 and to move around every few hours seemingly haphazardly but I’m sure to a very scientific system.  One of them, to whom everyone seemed to want to speak, is called Maria.

It was she who was being called incessantly on Wednesday morning at 06.00 or thereabouts. Mariaaaaa!  Mariaaaa!  I tottered onto my balcony to see what was going on and saw a group of about 8 people with theodolites and other bits of kit standing on the roof of the house opposite having climbed up a ladder delicately positioned at the top of the flight of steps to the upper floor.  They were calling to students down on the ground or on other roofs.

Needless to say I staggered back to bed, much impressed by the dedication and application of today’s youth and only slightly puzzled as to whether they had the owners’ permission to be swarming over their roofs.  I knew at least 2 of the owners were temporarily elsewhere.

This entailed 1½ hours walk on a familiar track before then diving down a heavily vegetated valley.  Much of the track had expansive views down to the coast including to the tiny ‘harbour’ of Agia Irini.  We had been there once before and had been struck by the strangeness of the place so I decided ‘photo opportunity’ had precedence over ‘footpath exploration’ and changed my plans.  Though not before I went to explore the top end of the path down to the crater which seemed fairly clear as far as I went.

Then I reversed to the main track going around the caldera rim.  I had walked this way often but never in this direction. It’s surprising how turning through 180o and going downhill instead of up gives a different perspective.   This section of track is pretty dramatic but you see more of it when not struggling uphill in the heat. 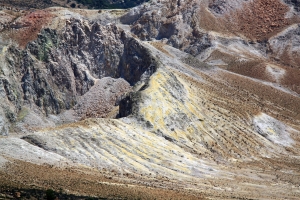 A different perspective on the Polyvotis crater

From the col, the lowest point on the caldera rim, I followed the long, winding track down to Agia Irini on the coast.

Weird it certainly is.  The industrial complex was built initially in 1879 for the export of sulphur from the crater for export around the Mediterranean for the protection of grapes before harvest.  The business never really flourished but staggered on under different commercial and political regimes until the Second World War.  Now it s just a collection of stone-built ruins, some of the ‘bins’ still filled with sulphur, the only evidence of any activity being herd of very healthy looking cattle grazing on the rocks, and bits of agricultural paraphernalia typical of marginal hill farms – wooden pallets, half-45-gallon oil drums, assorted plastic containers and the like.  Weird certainly, but not as photogenic as I remembered. 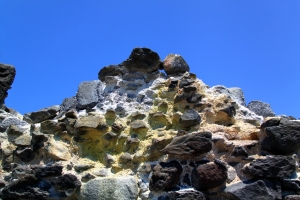 One of the remaining stone bins of sulphur 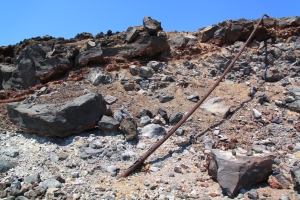 The steel pipe from the crater, once carrying sulphur in suspension, reaches the harbourside

After the long, hot pull back up to the crater rim I followed the track down into the caldera itself.  This again offered a perspectives I hadn’t seen before.  People who don’t like doing ‘out-and-back’ walks I think miss the point.  Walking in the opposite direction, particularly in the mountains, is quite a different experience in terms of what you see. 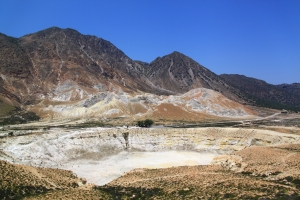 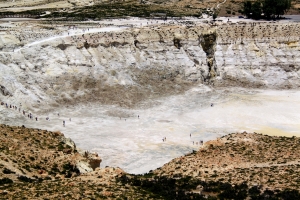 …. zooming in in case you couldn’t see the people 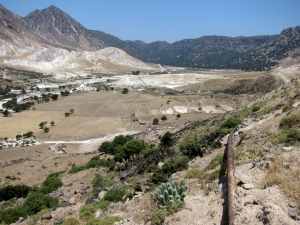 That steel pipe diving down towards the crater

One thing which the track down to the crater and across the floor showed was the extent to which this landscape is dominated by sulphur.

Sulphur deposits outcrop along the side of the track 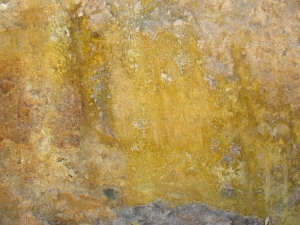 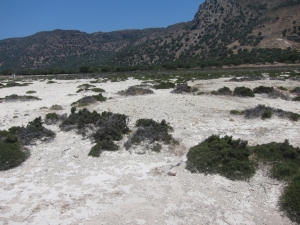 From the caldera floor it was a 2 hour climb over the col and back to the town.  A long walk, the longest I’ve done so far, but very interesting.

And would you believe, when I stepped out onto the balcony to photograph the sunset, the students were back up on the roof opposite.

…and panning a little to the right ….