Apologies for the delay with the blog, the internet connection has been very poor.

Saturday was an easy day in walking terms.  After a season skiing in Canada Ruth and Tim had had little exposure to the sun.  A month in Grey Britain had been poor preparation for the strong solstice sun of Greece.  April in Britain had been very enjoyable weather with temperatures up in the mid 20’s and many sunny days but May reverted to grey.

So with cloudless sky and little breeze it was very hot for walking and important to be careful about staying out in the sun for too long.  Accordingly we had a quiet morning.  I ambled along to the ATM at the harbour and withdrew some cash, relieved that the banking system hadn’t disenfranchised me yet again.  It’s not as simple on small islands as it is in the UK.  Things which have gone wrong include the recent electronic decision that I had entered my PIN incorrectly, power failures which render the machines useless (twice so far in the last 3 days) and the machine running out of cash and necessitating a visit by a bank official from Kos to refill it  (happened to us in 2008).  But today all went smoothly.

I wandered back to the hotel via a slightly inland, higher level route with good views down over the harbour and a different perspective on the town. 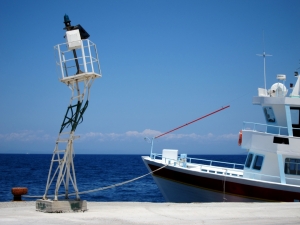 The end of the harbour 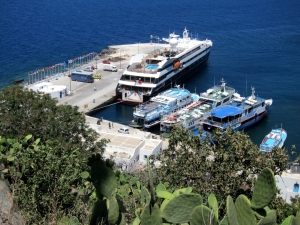 Once the strong heat had gone out of the sun around noon we walked to Hochlaki beach and continued along the shoreline.  The shoreline becomes increasingly dramatic.  Backed by high but crumbly cliffs it is a matter of rock-hopping on massive boulders, most of them of volcanic origin, some of them sharp-edged rocks straight from the cliff, others rounded by many years of  pounding by the sea, black, red sulphur-yellow …. and many pieces of grey lava-bubble with strange hieroglyphics like messages and signposts left by aliens. 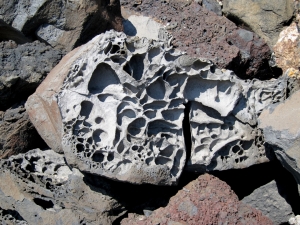 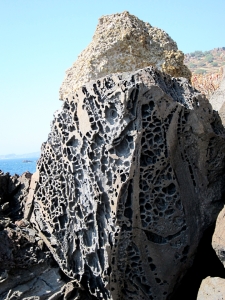 ….. or are they hieroglyphic epitaphs form aliens?

As well as the great variety in the rocks there were also other interests including artistic expression and the odd alien looking creatures. 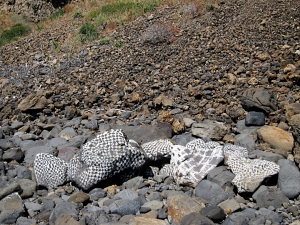 Art for the fun of it 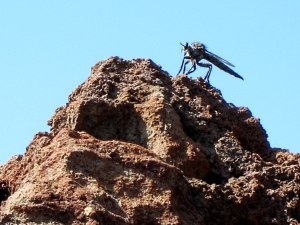 We continued along the shore for about an hour and then back-tracked, sufficiently interested and enthused to want to go back earlier in the day and walk further.

On Sunday we had a plan for a longer walk.  There are many dramatic things to see on Nisyros but unquestionably the most dramatic is the caldera of the volcano at the centre of the island and the crater at its far end.  We planned to go  on one of the day-trip buses down to the taverna on the caldera floor and then walk up the steep side to the crater-rim village of Nikia. From there we could get the public bus back to the town, always assuming that we arrived in time.

But it was not to be.  We went to the harbour in order to arrive ahead of the day-trip hordes arriving on the ferries and waited for the tickets booths to be dragged from the side of the ATM and put in place ready to greet the arriving trippers.  The driver of the public bus came along and turned on the engine,  unexpected since it wasn’t due to leave until 14.00 and it was still only 10.30.  When he had finished warming up the engine and switched it off I checked with him what time it was leaving and found that it was not leaving until Tuesday.  I had forgotten that it doesn’t operate on Sundays and didn’t know that the following day was a public holiday.  Best laid plans and all that

Need for a rethink.

Of the options available we went on a trip bus and got off at the junction with the road to Emborio.  Walked up into the village via the sauna, drink on the terrace of the taverna and then on up to the castle and church perched high on top of the hill, looking straight down into the caldera. 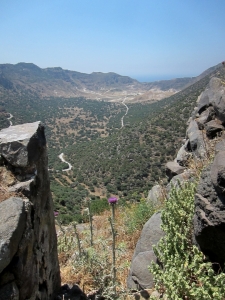 Looking along the caldera from the castle at Emborio

We then walked back to Mandraki via the lava bubble and the Evangelistra monastery.

There were still many flowers very much in evidence, not yet parched by the heat of the summer sun.  I suppose it was that which meant that butterflies were also very much in evidence, in some places drifting like clouds along a shady bit of path.   Last year while I was on Kalymnos I had seen for the first and only time the large Greek Streamer Tail butterflies flitting around the flowering oregano high up on the flank of the mountain near the ancient Kastri.  The oregano is in flower again now on Nisyros and there were the Streamer Tails high up on the rim of the Kato Laki caldera.  Very spectacular. 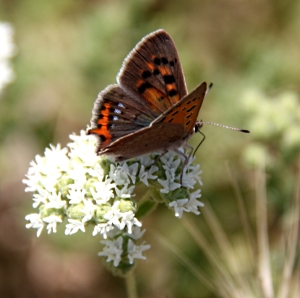 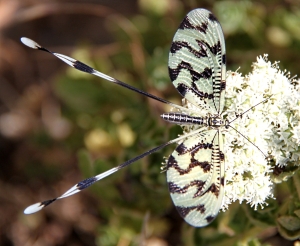 …. but none more spectacular than the Greek Streamer Tail

Once back at Mandraki it was time for a swim.  The sea was a bit rough to risk the dumping waves on Hochlaki  beach so I headed for the small ‘town’ beach with its stone breakwater and had a very enjoyable swim.  Nice and calm behind the breakwater but a a good bit rougher once beyond its influence.  Ruth stuck to the peacefulness of the hotel pool.

Yet another good day.

1 Response to Nisyros: rocks and butterflies