We decided that Monday would also be an easy day in walking terms.  Well, that was the plan.  In the event didn’t quite work out like that.

A very lazy morning, reading, chewing the fat, buying a spot of lunch.  Perhaps I should confess at this point I have splashed out and bought an Amazon Kindle.  I have been thinking of buying one for over a year but been put off by the fact that the books I wanted to read weren’t available in Kindle format, further deterred by the WiFi-only option as very limiting over here, and the thought of a monthly contract for the 3G version not appealing.

All change.  The books I want to read are now in Kindle format and the 3G version is not tied to a monthly contract.  Tim had had one for his birthday just before I flew over here and I was very impressed with it.   I didn’t bring any books with me this time because of the weight limits so I bit the bullet and ordered one which Ruth and Tim brought out with them.  With the 3G version ordering books is not constrained by access to WiFi which is a major benefit on Nisyros and the Kindle is actually easier to read than a ‘hard copy’ of the book.  Though I wouldn’t recommend reading in the bath.  When you open it, it goes straight to the last page you read.

Enough of the confessions and the advertising.  Towards the end of the morning I went for a stroll with the camera round the top road behind the town again, just to limber up. Spotted a big caterpillar munching on fennel and found a good vantage point to photograph the small beach with the breakwater creating a calmer area to swim which stood in sharp contrast to what was to come. 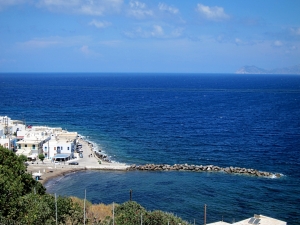 Calm water on the beach side of the breakwater

Ruth and I set out about 13.00 to walk further along the shore than we did on Saturday. On the bit we had done the shoreline had become increasingly dramatic, rock-hopping on massive boulders, most of them of volcanic origin, fallen straight from the cliff behind.  The further we went the more dramatic the rocks became, again black, deep-red, sulphur-yellow …. and many more pieces of grey lava-bubble like strange hieroglyphic messages. 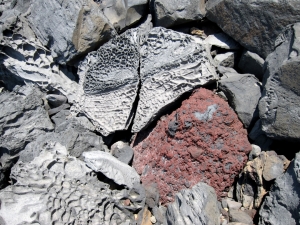 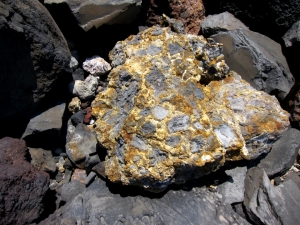 Sulphur Rock: not a new music craze or a town in the USA (as far as I know)

Altogether we rock-hopped along the shore for nearly two hours until we reached a small flat-topped headland which we managed to get round thanks to basic rock-climbing skills.  Extra zest was added to the operation by the very rough sea which periodically washed up the cliff to the height we were traversing at but we stayed dry shod thanks to careful wave-watching.  Great fun.

The target headland from beyond the edge of reason

We didn’t go any further because once round the headland we realised that further progress was barred by cliffs straight into the sea.  The odd bit of traversing was OK but enough was enough.  So we sat on the rocks, watched the waves pounding just below us and ate nut-bars.

We then rock-hopped two hours back.  Which was when we realised how tiring constant rock-hopping is with cloudless sky, sun almost overhead and rocks heating up like storage-heaters.  As it turned out it was good preparation for Tuesday.

After the dramatics of the shoreline, on the way down to the main square to have evening meal we went to watch a pretty dramatic sunset and had a bad bout of Repetitive Photo Syndrome.  I have long ago lost count of the number of sunsets I’ve photographed on Nisyros but I still took a lot more. 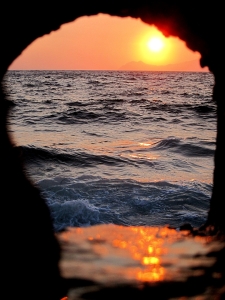 Another very good meal in the square and as usual a warm welcome from Irini.  Then we all had an early night.