Back to Nisyros: cut off from the rest of the world

It was an early start to Thursday in order to catch the 09.30 ferry to Nisyros.  A very relaxed start to the day.  The hotel we were staying in was just about OK for overnighting but not somewhere to hang about longer than necessary.  We had unpacked little and so after essential preliminaries we ambled down the street to the harbour and sat in a taverna and had cups of coffee to re-caffeinate our systems ready for the day.  We had an hour to kill and it was very pleasant sitting in the quiet of the morning, the loud brashness of the night before just a memory.  There are very few people around at this time of day in Kardamena.  It’s a different world.

And then the flocks of day trippers started straggling onto the seafront and along to the part of the harbour where the 3 trip boats park up.  By the time we had finished and ambled along to buy our tickets and get on board, one of the boats seemed to be crammed to capacity and we were redirected to the one of the others, a rival concern.  We couldn’t tell if this was because we were only travelling one way and therefore represented a reduced income but it was of little matter as the ferry we had been directed to left probably half an hour ahead of the other which remained, seemingly to pack another flock of day-trippers on board when they finished dribbling along the seafront.

Once at Nisyros we were first off the ferry and headed straight for the hotel, keeping well in front of the flock which queued up at the bus ticket booths to find out which bus they had been allocated to which would whisk them up to the rim of the volcano and then down into the .caldera before parking at the crater-side taverna for an hour’s viewing and being relieved of money. Just as on Kardamena it was all a different world to that which we inhabit, a parallel universe which we bump up against now and again.  Walking up in the mountains it is rare to see anybody all day long.

Not quite so on Thursday because we didn’t venture very far.  After dropping off bags at the hotel and changing into walking clothes we ambled up to the Paleocastro.  Enfys and I went there many times when on Nisyros and it has never ceased to amaze but this was Ruth and Tim’s first visit and interesting to see their reactions to it.

When we arrived there was just the one couple there who were leaving as we arrived but when we re-focused our attention from the micro-scale of butterflies on lavender bushes and large lizards having a territorial battle over territory or women or male pride, historically the principal causes of battle, there was a small straggle of day-trippers wandering around the massive walls. 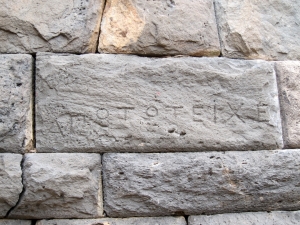 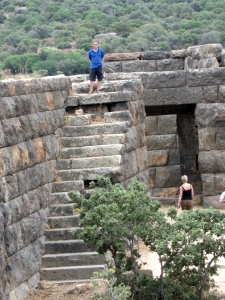 We spent a couple of hours up there and for the last hour we had the place to ourselves again, day trippers having left to catch the ferry back to Kos at 15.30.

That is how Enfys and I first came to Nisyros, a day-trip on a hydrofoil from Tilos.  Whisked into the volcano on a bus for the usual quick shuftty and then on through the town we found our way up to the Paleocastro.  Like today’s trippers we had to cut short the visit in order to get the hydrofoil back to Tilos.  But it sparked our interest so much that we determined to return the following year and stay overnight and have kept coming back.

We rounded off the afternoon with a swim.  I headed for the pebbles and dumping waves of Hochlaki beach while Ruth settled for the peace and quiet of the hotel swimming pool.  Ever since picking up an ear infection in a swimming pool in Italy I have had to keep water out of my right ear, even in the bath, in order to avoid the infection flaring up again.  The sea water in the Aegean causes no problems, presumably because of the high salt content but I am very trepidous  of  risking swimming pools again.

22Usual end to an unusual couple of days.  Meal in the square and then to bed.

We decided to breakfast fairly early on Friday and were down just after 08.00 to get the best table on the terrace, underneath a large palm tree at the side of the pool. I’ve said it before but it cannot be said often enough, breakfast on the terrace at the Hotel Porfirys is one of the best ways to start the day.  We didn’t hurry.  There was no need to hurry.  We didn’t have a bus to catch because we had decided on a circular walk from the hotel.

The walk took us up through the woodland on the Northern flank of the island to the monastery at Evangelistra with its great shade tree, apparently the meeting place of the unofficial local committee during one of the many periods of occupation of the island by non-Greek forces. 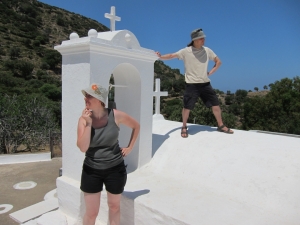 Where to from here?

Then back to Mandraki via the ancient monastery of Armas, now being excavated and renovated by archaeologists when funding allows.  Not much going on at the moment.  Not much funding available for archaeology on backwater islands in a time of very severe economic constraint.

Fairly early finish so time for another swim.  Again I went to Hochlaki beach but this time found the dumping waves significantly bigger and heavier and so didn’t swim for long.  I stretched out to dry off in the sun and then just as I was crisping nicely a particularly large wave broke a lot further up the beach and swamped me.  Ruth again went for the quiet option of the hotel pool, very sensible under the circumstances.

I went back to the hotel and joined Ruth and Tim in the very civilised environment at the poolside and had a quick swim in the pool, being sure to keep my head out of the water.

Taking the plunge: a little whimsy at the hotel pool

I then spent two hours trying to sort out yet another banking trauma.  Having finally succeeded in being able to Skype the bank and get my account re-activated for use with the PIN (a long story) and tested it by making a withdrawal at the harbour ATM, I now found that the on-line banking facility had been upgraded and wouldn’t allow me to log-in.  Another long story but it turned out that the bank had changed the identification number which I needed to access the account without advising me of the now-superfluous ‘##’ at the end of the code.  Simple when you know but when a facility has worked perfectly satisfactorily for months why should it occur to you to think that the code has changed?

Having got that sorted by use of my mobile, which basically I keep and only use in case of such emergencies, I then found that the island’s electricity supply had been cut off.  No explanation, just no electricity anywhere on the island.  So no water because it’s pumped and so no prospect of a shower.  No WiFi.  No power to charge flat batteries.  No juice-making to get fresh orange juice.  No ice for drinks because fridge doors need to be kept closed.  A tough, deprived life.

This, as well as the generally poor internet connection, is all by way of explaining why the blogs have not been in evidence for a few days.  It is very pleasant being on a remote, peaceful Greek island but it is difficult for the comforts of Western Civilisation to continue without access to high-speed international communications.  And impossible without electricity.

In the larger scheme of things these are really minor inconveniences and once resolved disappear into the back of the memory.  They don’t detract from the long term enjoyment of just being here.