When I was young, summer holidays were a week at my grandparents’ in a small mining village in rural Carmarthenshire.   I took every opportunity to escape the boredom of sitting around the house and walk the mile or so up to my uncle’s farm.  The farmhouse had no electricity, no gas, water was from a spring in the yard outside and the loo was a wooden plank in a sentry-box sized hut perched over a ditch at the end of the orchard.  Torn up newspaper on a string hanging on a nail did service.  No door.  If shy, you whistled.

There was no road access to the farm buildings, the milk churns were taken by horse and cart along a deep-rutted track to the wooden platform at the roadside to be picked up by lorry each day.  Bread was freshly baked when needed, sliced ever thinner as it became ‘firmer’ with passing days. Deliciously salty butter, churned on the stone worktop in the larder, was spread liberally.  Eggs were still warm from under the hens.  We had homemade jam on fresh-baked scones in the afternoon. Basic. Idyllic. The sun always shone.

At the time I simply enjoyed it.  It was only much later that I realised how privileged I had been to have a glimpse into the past, into how rural folk used to live.

Recognising how important it is for society to remember its past, the Welsh Folk Museum at St Fagans, 15 minutes from where I used to live in Cardiff, was established in 1947.  In the words of the introduction on its website, it is “part of a Scandinavian-inspired movement, concerned with collecting and preserving examples of a disappearing, primarily rural, way of life  …….. that had been in existence since the Middle Ages”.  The museum is not a collection of artefacts but of buildings – farmhouses, bakeries, shops, dovecots, pigsties – all dismantled brick by brick in their original location and moved to the 104-acre site.  It is a record of how ordinary local folk lived rather than the grand castles and fortifications, mostly built by Roman and then Anglo/Norman invaders, for which Wales is better known.

This interest in how people lived years ago has stayed with me.  Along with the active craters in the main caldera and the dramatic volcanic rocks, it’s part of the reason why I continue to find Nisyros fascinating.  There are old buildings and structures, ‘heritage’, wherever you go.  Indeed, there is so much to see, despite the ravages of time and volcanic eruptions, that as well as being known as ‘The Volcano’ it deserves the title ‘Heritage Island’ though thankfully it is not marketed as such.

At the harbour in Mandraki day-trippers from Kos get on the bus to the edge of the main crater and brave the heat and the sulphur smell to go down the rough path to the crater floor and walk among the fumaroles.  Most then walk the length of the town and maybe climb the steps from the narrow alleys to the monastery of Panagia Spiliani (The Madonna of the Cave).  Some opt for a more extended coach tour taking in the fascinating caldera-rim villages of Emborios and Nikia.  A few (very few) trek up the stone-paved kalderimi to the immense Paleocastro dating back more than two millennia and built of stone blocks each the size of a banqueting table.  All worthwhile and very dramatic.

But there is far more to Nisyros than meets the day-tripper’s eye.  Both on the surface and beneath it.  Trek into the mountains and the true scale of past settlement is clear.

The first and most obvious indication is the extent of agricultural terraces rising steeply to the tops of mountains on all but the most precipitous and rockiest slopes, taking every possible advantage of the richness of volcanic soil.  The high, narrow terraces would, could only, have, been worked by hand, triggering the thought:  “how many people did it take to work this vast area and where did they live?” 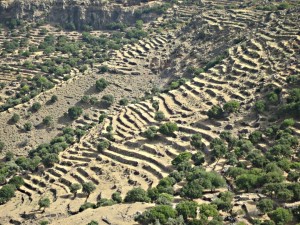 Even if you only stay on the trails which cross-cross the island the ubiquity of stone-built dwellings soon becomes clear, far greater in number and more widely distributed than on either Symi or Tilos, the other two nearby Dodecanese islands with which I’m most familiar.  On those islands the abandoned dwellings of the past are grouped in small villages such as Mikro Horio and Ghera on Tilos and Ghria on Symi.

Two questions.  Why are settlements so much more widely distributed on Nisyros than on other islands? Why have so many of them survived relatively intact, particularly given continuing seismic activity?

That’s it for now.  You will have to wait for the answers.

My academic background is in the location and morphology (form, shape) of settlements and this, together with my childhood memories, has triggered me to try to write more about the history of settlement on Nisyros and what can still be seen today.  Too much for a blog post, this is meant as an appetiser.  When I have completed my next book, I’ll be writing a short piece – not a full-blown book so much as an extended, illustrated, essay.  Which will be posted on this blog.

My next book?  ‘A Small Life in Twenty Memories’.   Working on the final chapter now.  Hopefully available on Amazon Kindle around Easter.

In the meantime, if you haven’t already, why not take a look at, ‘Greece Unpackaged: travels in a foreign language’ available from Amazon on Kindle.  Get ready for your upcoming summer.