Greece, Symi: Up, along a bit, and down

The temperature was pushing up to 40 degrees in the shade. The previous afternoon, a friend with a thermometer on his balcony had recorded 58.7 in the sun at 13.00 – hottest part of the day is a couple of hours later.    My visitors had all gone back so I could get back to doing mad things.

I settled on a route and about 09.30 set out.  My body doesn’t function properly before 10.00 in the morning but I knew there was advantage in leaving as early as possible to get the hard work over with before the heat built up and to finish before it peaked in the afternoon. The first half hour would be through the narrow alleyways of Horio, the old village where I was staying, and would be more-or-less at a level as far as the hairpin bend on the main road at Lavinia.  Much of it was in shade at that time in the morning which was a bonus.

A short distance on the road, keeping close to the side to avoid being mown down by scooters and cars zooming down with commuters anxious to get to work in the harbour before the trip boats start coming in.  Not many of them but they travel fast, swing wide, and turn the engine off to conserve petrol. It’s not far though the heat is already beginning to tell on the uphill trudge.  But it’s not for long.

At the next hairpin bend turn left onto a track at the Agia Marina Cemetery. A brief respite. Behind the cemetery the track bends rightwards to cross a bridge over a deep gulley.  The bridge was damaged by the November floods in 2017 and is now being reinforced.  The only way across is to walk on the framework of re-bars (network of reinforcing steel bars wired together, ready to receive ready-mix concrete ……  at some point in the vague future, making sure your feet don’t go down the gaps, inconveniently foot-width apart.

Immediately after pussy-footing across the re-bars the path goes very steeply up on the right under trees.  It was much damaged by the water cascading down in the flood but was a difficult start even before that.

The beginning of the path is steep and difficult underfoot but once up the first bit the problem is finding where to go among the numerous possible lines.  A few years ago, I spent time sussing it out and marking it with stones. In fact, I marked the whole path as it zig-zags up to the ridge top.  It’s a great path and every year I ‘refresh’ the markers.  You’ll recognise them, stones set on edge in the direction of travel.  When there is a change of direction there is a stone in line with the new line.

There are reminders that this is a very old routeway. A short flight of stone steps.  Retaining walls on the downslope side.   The occasional fading red paint spot shows it was subsequently marked as a walkers’ path but until I marked it with stones, I found it very difficult to follow.

As the path broaches the ridge-top, I veer off it to the right because when the thyme is in flower, as it was on the day, a couple of dozen beehives straddle it. The bees soon make it clear they don’t like you near their place, so I give them a wide berth.  The views are dramatic, back down to Horio and Yiallos, with Nimos Island, the ridges above Nimborio and Turkey beyond.

It twists and turns but rises inexorably upwards for a thousand feet.

Just below the crest is the Panagia Hamon monastery, great place to cool off in the shade after the exertion of the climb.  The week before I walked it with a friend, continuing on the track from Hamon and then cut up through the woods to the cliff-top Kokkimedes Monastery.  Not today.  Kokkimedes is well worth a visit but the route to and from it is mostly out of the wind and very hot.

I wanted to stay in the breeze as long as possible.  Going back downslope a short way to skirt the beehives, I continued along the ridge-top.  There are sections of goat paths though mostly it’s a matter of finding lines through the rocks and sparse vegetation. Even at this height there are signs of long-past settlement, including what were probably the occasional stone-built shepherd’s shelters and a small water-hole, dry now but with cracked sediment at the bottom indicating it had fairly recently held water.  Amazing that people lived up here, at least some of the time.

At the end of the ridge, high above Pedi and Agios Nikolaos, are a couple of derelict buildings and a stone-built pillar.  The pillar is not as high as it was when I first saw it in the year 2000 but is still a significant size.  One of the buildings is large enough to have been a permanent dwelling.  It’s a major vantage point to observe the approaches to the harbour from the north and east so there is a possibility it was part of the communication network at the time of the Crusader occupation, though there is no evidence from the structure that it was anything other than agricultural.

Form here it is a long descent to Gria, the abandoned village above, but not visible from, Pedi.  The permanent pond there is always fascinating, with a variety of wildlife. Sit here long enough and in the past, I have seen and photographed three sorts of dragonfly, birds, bonking frogs and a 6-foot Black Whip Snake.  Today, I didn’t stay long, it was too hot after dropping down from the cool breeze on the mountain top.  I only photographed Red Darter dragonflies.

The descent from Gria to Pedi is first on a narrow, in places overgrown, path before reaching a deep gulley.  Too grand to call it a gorge but it requires downclimbing waterfalls on bare rock.  Reassuringly secure underfoot but requires good balance and confidence.

The closer you get to Pedi and sea-level, the less breeze there is and soon the heat begins to tell again.  Quick change into a clean t-shirt before going to the Katsaras to sit in the shade with a beer before taking the valley path back up top Horio, and a longer recuperation at Lefteris’s Kafenion.

While you’re here, why not take a look at my book, ‘Greece Unpackaged: travels in a foreign language’ available from Amazon on Kindle 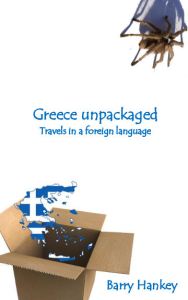 4 Responses to Greece, Symi: Up, along a bit, and down