Christmas in the Canadian Rockies

First, lets do the festive stuff:  Happy Christmas to all.

Climate change is having weird effects.  There is no doubt that this is real winter but not as icy or snowy as in the previous eight years. In 2010 temperatures were below minus 20 for the month I was here for the first time.  Nasal hairs developed icicles as we crossed the car park.  Last year heavy snowfall meant deep deposits when we arrived, refreshed regularly.

This year there was heavy snowfall at the beginning of October followed by a partial thaw.  There is certainly nowhere near as much ice on the Bow River as normal.  A friend of ours was going ice-fishing and went through the ice into the water as soon as he stepped onto the river.  No snowshoeing up the river for a while yet.  The ice sheets have been broken up and piled up downstream. A grizzly bear was seen wandering around town in early December, long past its bedtime.

There is enough snow for very good skiing but it could do with refreshing and there is none in prospect.  Sunshine Coast, one of my favourite runs at Sunshine Village, has the tops of small trees poking through the snow.  I didn’t realise there were any trees there.

Walks are good but no need for snowshoes or even cleats.  Tunnel Mountain, Bow River Falls, Spray River Loop.  All very enjoyable

Not as much snow and ice as usual.  Still, who is complaining.

Below a melange of images from the first few days.  (Just showing I know some posh words).  A striking difference in colour from the previous blog post. 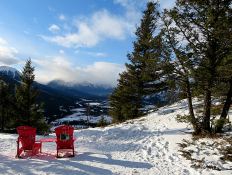 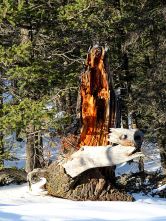 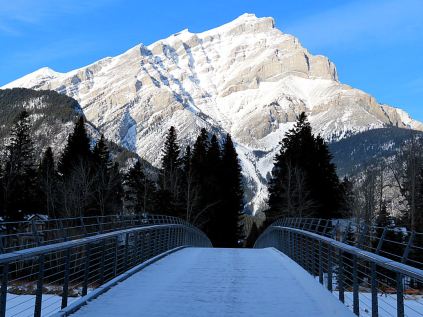 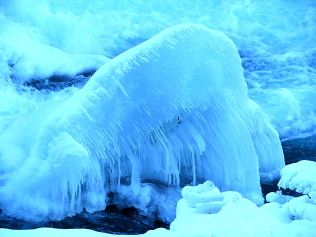 1 Response to Christmas in the Canadian Rockies