2016 is not going at all well for me.  Just diagnosed, I now have a long-term health issue, probably triggered by the flu, which means a period of monitoring and the need to review plans and maybe lifestyle.  So, still looking back and looking forward hopefully.

Walking along Bear Street in Banff, middle of December, having been in Barpa Bill’s the Greek takeaway (carry-out) for a mid-day spanakopita, down jacket zipped to the chin against minus 20oC, I became aware of frenetic twittering.   The tree overhead, bare of leaves, was full of sparrows, downy chests puffed up against minus 20oC, twittering noisily and, like most tweeting, presumably inconsequentially.

Looking back even further I was reminded of the swallows which swoop overhead on Symi.  In spring and early summer they zoom into derelict houses desperately trying to sate the appetites of squawking broods.  The adults pause now and again to perch on overhead wires and sit twittering.  When the young fledge it is amusing to watch them learning to adjust their flight to land and perch by their parents, failing time and again before getting the hang of it. By midsummer the overhead wires are filling up.

Something to look forward to.

For some reason both flashbacks reminded me of the picture by Paul Klee.  Maybe it was all the twittering. 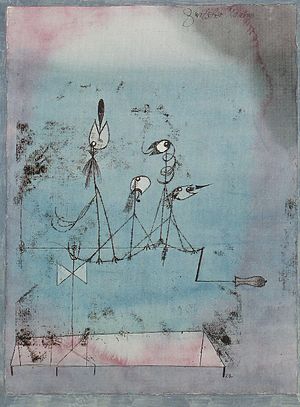