I have always loved walking in the snow despite having to put up with what I now know is Reynaud’s Phenomenon, painfully cold hands with ‘White Finger’ even in summer.  I used to go walking in the Derbyshire Peak District whenever I could if there had been snowfall.  I almost met my demise as a young teenager on one such occasion, a memory revisited on a trek up Sundance Canyon near Banff in 2011.  Read about it below if you like:

A few years ago I went walking with a friend at the southern tip of the Brecon Beacons, the ridge behind the house, after a heavy snowfall.  He had been on a snowshoeing holiday in Iceland and was armed with new snowshoes and so floated over the mountain.  I floundered along behind.

Impressed by this, while I was in Banff in February this year I intended to go on an organised snowshoe trek but lack of fresh snow made it not worthwhile.  However, heavy overnight snow a week ago, coinciding with a day-off from skiing, meant I signed up with Discover Banff Tours for a 4-hour trip to Marble Canyon in British Columbia.  I prefer doing my own thing, going my own pace, but as well as providing necessary equipment (snowshoes in this case) and transport to interesting places (necessary without a car) an organised tour has the advantage of knowledgeable guides.

We left the Trans Canada Highway and Banff National Park and heading southwest on Highway 93 into Kootenay National Park, turning into the car park just over the AB/BC provincial border at the start of Marble Canyon.

Just as there is no tunnel through Tunnel Mountain, so there is no marble in Marble Canyon.  But there was plenty of fresh snow.  A significant amount had fallen on the Alberta side of the Rockies but, as is usually the case, across the Continental Divide to the west in British Columbia, moist air from the Pacific hitting the cold of the high mountains had dropped even more.

It was snowing as the 18 of us on the trip shivered out of the warm minibus and struggled with the unfamiliar attachments to strap on the one-size snowshoes over our winter boots, then set off along the trail.

Unlike the treks up Grotto Canyon and Johnson Canyon which I did with the same company a couple of years ago, this was not along the frozen bed of the river, for the simple reason that it was not frozen.  Not enough of it anyway.  So the trail wound gradually up the side of the canyon, crossing and recrossing it on numerous stout bridges, the limestone cliffs becoming progressively higher, the icy water increasingly further below.

The beginning of the canyon, rock walls about 20-30 feet high, open water below

A natural rock bridge high above the water, topped by a thick layer of snow

Zooming in one one of the icicle clusters

Another rock spur capped by snow

Then we reached the end of the trodden trail.  To this point we had been walking on compacted snow, the integral crampons in the snowshoes giving good grip.  Now we headed off rightwards through deep, fresh powder snow into a forest of bare, thin trunks of trees once reaching desperately upwards towards sunlight but today into continuously falling snow.  They had fought with each other for sunlight but had been destroyed by fire.

For years Parks Canada sought to eliminate forest fires but in recent years came the realisation that fire was a natural phenomenon essential for ecological regeneration and in particular for the control of pine beetle which is wreaking havoc among the Lodgepole Pine, the major tree species of the Canadian Rockies.  When fire broke out in on the flanks of the Tokumm Creek in September 2003 it was allowed to run its course within a limited area as a trial.  The resulting landscape is now enchanting, tall dead treed reaching skywards into the falling snow, luxuriant new growth reaching head height as we meandered through.

Now there was no trail, we each found our own way through the deep snow, snowshoes giving flotation.  Youngsters in the group climbed up slopes and jumped off, full of energy and exuberance.  I sought out intriguing shapes in the dead trees.

Looking up towards the col through the burnt-out forest

Some trunks thicker than others, pock-marks filled with snow

I always like to know where I am, where I’m heading, but here it seemed aimless. Meandering, just playing in deep snow because we had snowshoes.  I asked Giedre, one of the guides, which direction we were going, and she said “just wander around for a while and have fun.  Generally over there” , waving a hand vaguely to the right.  Easing a way through the new growth, careful to avoid tree-wells (hollows in the snow around tree trunks into which it is easy to slide and difficult to climb out of) I picked up a faint smell of something sweet and followed it until I found Dylan, the other guide, sitting in a hole in the snow at the end of a snow-covered fallen tree trunk with a saucepan bubbling away on a camping stove.  It bubbled like lava, smelt like syrup.

Soon we had all clustered around and were being served cups of hot chocolate from flasks.  Then the explanation.  Dylan was making what is variously known as ‘Maple Taffy’, ‘Maple Toffee’ or, in the USA, ‘Sugar on Snow’.  Originally a French Canadian delicacy known as ‘tire d’érable’, maple syrup is boiled until it reaches a sufficiently high temperature that when it is poured onto snow it solidifies and can be wound up on a wooden popsicle stick.  It used to be prepared in ‘sugar huts’ and a quick search on Google shows how many commercial businesses have adopted the name and the image.

Here in the middle of nowhere, in subzero temperatures, after an hour’s trekking uphill, it was somehow magical.   It belonged.  This was the right place, the right context. Dylan had smoothed ‘plates’ in the snow on the trunk and poured the super-hot syrup onto it in individual sized portions while Giedre handed out popsicle sticks onto which the soft toffee was twirled. 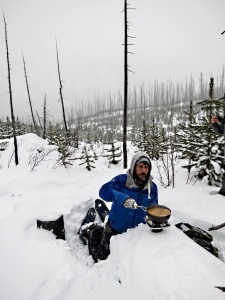 A closer look at the molten pan

We then continued through the burnt-out and newly regenerating forest, each making our own tracks through the deep powder, sinking in but nowhere near as deep as we would without snowshoes. Dylan and Giedre stopped periodically to make sure we were all in the same general vicinity, looking slightly worried when the numbers didn’t tally, looking relieved when a few more heads bobbed up among the new trees.  My guess is that the regenerating woodland will make this part of the trip impossible in a few years time as the trees, now about 5-6 feet tall reach above head height and the branches push together. At the moment it’s great.

A final slide down a steep snow bank into a broad fire-break on our derrières and we were back at the car park.

Next day I bought a pair of snowshoes in the ‘Sale’ in one of the many outdoor pursuit shops in Banff, reduced in price by 60%, and headed off along the Bow Valley looking for deep snow.

New snowshoes, off to look for deep snow