Warning: this is long and may get very boring

The RCMP officer was polite but firm.  I was on the wrong side of the tracks and I couldn’t cross.  The road was closed and so was the trail which at this point came out of the woods and off the riverbank to cross the Canadian Pacific railway at a level crossing before diving back into the woods again..

Where are you headed?” he asked.

“To Vermillion Lakes” I answered, tongue in cheek.

But this time the view to the left was dramatic, train wagons had come off the rail on both sides of the line and were lying at an assortment of crazy angles.  I knew from treks in previous years that some of them would be in the river.  There was no sign of the bridge which carried the Canadian Pacific (CP) railway over the small creek barely 100 metres from the level crossing.

Delivered to the ski hill the conditions were perfect and for whatever reason there were few people there and no sign of the Christmas crazies.  A really great day skiing.  Train wreck forgotten.  Arrived back in Banff close to dark and tired, so no opportunity or inclination to check out the train wreck.

But Saturday I was having a ‘rest day’ and so set out along the Bow River and then onto 40 Mile Creek, the tributary which joins it just upstream of the town and the scene of the derailment. It was dramatic.  The word is much overused, including by me, but this was indeed true to the meaning.

Because of the mild weather (only down to about -10oC) the river was still flowing over much of its width. A dam had been built out of rocks and lined upstream with a membrane.  Further upstream from that were two rows of straw bales damming the flow further.  Immediately above that the accident, a freight wagon lying across the width of the river with material spewed out from it.  Others were lying at all sorts of angles, some split open or snapped in two.  A huge crane and a smaller machine were aligned over the site, men in hi-viz gear swarming over the area.  A temporary footbridge had been hoisted into place to allow men to cross from one side of the fast-flowing water to the other.

I went up to the road to cross the rail line by the level crossing in order to view the incident from the other side.  That was when I was approached by the RCMP.

“I’m sorry but you can’t go any further.  This is a major construction site and the public are not allowed across”.  I asked, with as innocent and naive a look as I could muster, “I just want to join the trail to Vermillion Lakes”.  Much as I like the walk along Vermillion Lakes that wasn’t my goal that morning.  It was indeed a construction site stretching along the railway on both sides of the road with massively heavy vehicles lumbering across.  I was walking through the middle of a major operation.  He wasn’t on a horse or  wearing a flat brimmed hat, red coat, and neatly pressed riding breaches tucked into leather calf-length boots, but I knew when I was onto a loser.  I turned back.  The mountie had got his man.

I walked about 200 metres back to the confluence of 40 Mile Creek with the slower flowing Bow River which was frozen sufficiently solid to have an oval skating circuit close by.  So I took to the ice and walked upstream, carefully staying clear of the still-open water on the creek as it merged, to reach the narrow strip of land between the two rivers and by that route managed to find a way through the trees and wade through the soft snow to get within metres of the site of the derailment.  I could see a number of wagons had left the rails, some ending in the river.  Those which had split or snapped in two, had spilled their contents onto the banks and into the water.  The bridge had collapsed leaving only a stump at one end still bearing its colourful graffiti. 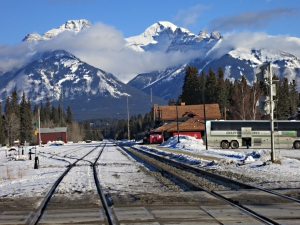 January 2014, looking from the level crossing towards Banff station, at the end of December a marshaling yard for the repair and recovery operation 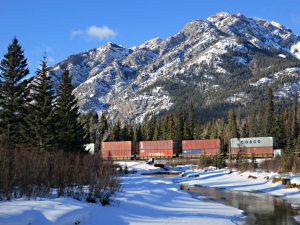 Looking upstream to the mayhem 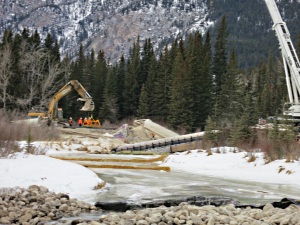 Bridge gone, derailed wagon left across the creek to dam it, footbridge in place for the recovery operation, spillage evident on river bank into the water 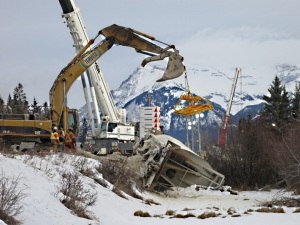 Derailed and split wagon with large-scale equipment above

Local newspapers covered the incident but information was vague and contradictory.  As far as I can work out the following is correct.  The derailment occurred at 02.00 on 26 December.  Sixteen wagons were derailed, 6 into the creek. Closure of the line was rumoured to cost C$1million an hour.  The rail line was reopened around 16.30 on Sunday 28 December.  There is no incentive in Western society like money!!  Canadian mentality is simply “If there is a problem fix it.  Fast!”  I admire that.

Initial information that the derailed wagons contained potash and lentils seemed to be wrong, later and more consistent information  was that of the six wagons which ended up in the creek five contained fly ash and the sixth soya beans.

The concern about fly ash is that it is a waste material from coal fired power stations which is pozzolanic, a partial substitute for cement in concrete.  It also contains harmful trace-elements including in particular sulphur.  Thankfully mixing fly ash with concrete is now widely accepted as a positive use of what was once considered a ‘waste’ material which previously was dumped in holes in the ground to gradually leach into the environment.  (I like to claim a minor role in achieving that in the UK)

However, released into a water course in large quantities it can be a serious environmental problem which is why Parks Canada and the local authority environmental agency were on the ball in monitoring what the impacts were.  Hence the stone dam and the straw bales and why one rail wagon has been left across the creek because it acted as a very effective dam, especially as with plummeting temperatures the creek froze over. 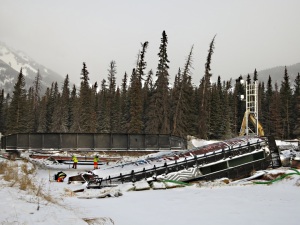 A week after the derailment, temporary bridge in place, river frozen solid enough for work to be carried out from its surface, wagon frozen in place, spillage removed

Drilling through the ice with hand auger to monitor the water

It seems from reports that there has been no serious chemical contamination so far.  Unfortunately however, the fly ash sinks to the bottom and in this context, potentially at least, smothers autumn-spawned fish eggs.

There are increased numbers of bears being killed by trains in the Banff National Park and it has been suggested that one cause of this is spillages of grain from freight wagons.  The soya beans would definitely pose a problem in that regard ………. except the bears are now hibernating and hopefully will not know that the beans had been spilled when they wake up in spring.

I knew from waiting for trains to pass when I’ve been on the trek to Vermillion Lakes or on the way back to Banff from the ski hill in previous years, that some trains are very long.  You can grow old standing there or fall asleep on the bus. The vast majority are freight, some are ‘double-deckers’.  I started to research.

It seems that the Canadian Transport Safety Board has investigated the causes of ten derailments of long trains since 2000.  Of these nine were Canadian National and only one was Canadian Pacific.  The reason for the large discrepancy, apart from the fact that CN is the larger operator and therefore runs more trains, is that CP has for a long time been at the cutting edge of ‘distributed power’, putting the three locomotives required to move such trains at strategically determined intervals along its length rather than clustered at the front.  This better controls ‘in-train forces’ and compensates for the adverse effects of very cold temperatures on air-brakes.

Another critical factor is the proper marshalling of trains.  A known cause of derailments in long trains is placing heavy wagons behind lighter ones, obviously more of an issue with mixed loads.  Heavier loads have more momentum and can buffer-up into lighter ones which stop more readily, thereby snapping the couplings.  Increasingly, the marshalling of long trains is computer controlled to prevent this.

I have no idea what was the cause of this derailment.  I only experienced the aftermath.  It does seem strange that it was CP, which has a track record (apologies for the pun) of using better technology, which ran this train.

An investigation will produce answers and causes in due course.  If Canada is like the UK and probably the rest of the world, inevitably there will be a battle between assessment of safety and environmental impacts on the one side and powerful economic interests on the other, the outcome of which will play a part in what is made public.

But it made a very interesting variation on a walk.