Symi: a trek to a time before Greece

It began when I was lying on a wall at Agios Nikolaos Stenou monastery on the top of the ridge between Nimborio Bay and the open channel which separates Symi and Greece from Turkey, the dividing line between Europe and Asia.  I was taking a siesta, luxuriating in the sunshine with enough breeze to prevent overheating. In the silence I became aware of rhythmic footsteps.  I looked up as a laden donkey and an elderly guy ambled along a path below me.   He had seen me.  We waved in greeting.  I resumed my siesta.

One of the more puzzling omissions from the SKAÏ map of Symi is the footpath from the end of the beach at Nimborio to Ag Nik Sten.  Paint-marked, well trodden and recently maintained, it has obviously been there much longer than the 14 years I have been walking it.  It’s a great viewpoint, has a large shade-tree and an accessible sterna with good water.  A short walk with good pay-back for effort.

The guy with the donkey disappeared behind a crag and I was intrigued to know where they were heading.  The terrain looked completely barren and there was no settlement shown on the map.  I was on my way back from a long walk and had began to salivate at the thought of having an ice-cold frappé when I got back to Yialos so I declined to follow but returned another day to find out where they were going.

I had not noticed before but the path split, bearing off to the right along the line of the ridge at a lower level rather than continuing left and upwards to the monastery set below a limestone crag above a narrow plateau.

On the unmarked path below Agios Nikolaos Stenou monastery

Unsurprisingly, like the path to the monastery it was not shown on the map but unlike that path it was not way-marked with paint splodges or cairns.  However, it was certainly well trodden with plenty of evidence that the donkey walked it regularly.  It headed along the narrow peninsula towards an area marked on the map as ‘Κοκκινόχωμα’, translating as ‘Red Soil’ with the promise of ‘Hellenistic Period Ruins’.

Initially it skirted to the northwest of an outcrop of very sharp rock, the ‘tear pants limestone’ of an earlier blog, or perhaps more appropriately given its nature in this location, ‘razor limestone’.  Then it passed through a small col onto the southeast side of the ridge where the nature of the rock changed with coarse red intrusions.

Typical of the ‘razor limestone’ along this section of ridge 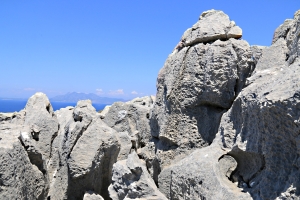 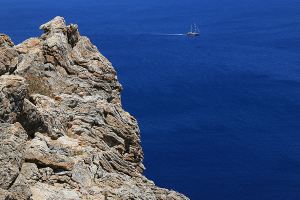 After a short way it crossed to the northwest of the ridge again and started to drop down at the foot of a vertical crag.  Given my predilection to climb things I left the path and did so, with considerable care to avoid cuts and abrasions.  At the top was a formation or structure which looked like a miniature version of the cromlechs scattered on mountains around Wales.  Flat slabs were lying horizontally across vertical ‘legs’.  I don’t know if it was natural or man-made but on the adjoining crag was a very definitely man-made structure, a wall built into the rock. 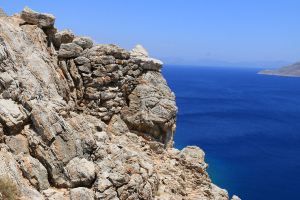 Looking back to the ‘cromlech’ on top of the adjoining crag

It was more difficult to climb that crag but on top was a level earth-floored platform with a sheer drop on all sides, not very large but about as defensible a position as it was possible to get.  Assault from any direction would hazardous and easily repulsed.

From the platform looking towards Turkey

Photographer on the edge of the platform looking down about 500 feet to the small ‘locals’ beach reachable only by boat.

Below the fortified position was a broad col with agricultural enclosures and buildings, still in production but undoubtedly with a history going back many centuries.  Farming activity in the col, about 300 feet ASL, is completely invisible from the sea, an important consideration in days when pirate raids were common.  The fortification would have provided a refuge to which to retreat in case of attack.  It is unlikely that productive land would have supported a large population but a small community could well have subsisted here and defended itself.

Part way down the crag looking towards the col

From my limited knowledge of archaeology and the history of this area of Greece I suspect from the rough-stone construction of the fortification that it is Pelasgian, dating back to before the Hellenic period.  Little is known about the Pelasgians.  It is uncertain whether they were the ancestors of the Greeks or lived here before the Greeks but in either case they spoke a different language referred to by early Greeks as ‘barbaric’ and had a different culture and weapons.  Some think they may be related to the Mycenaeans or Minoans or Ionians, or that ‘Pelasgian’ may have been a generic term applied to a number of pre-Hellenic cultures and languages.

It was interesting to sit on top of the crag and try to imagine. Certainly, here the pre-historic past seemed closer, more real than the 21st century.  It is known from excavations on Limnos that Pelasgians were in the North Aegean not that far away so it is a reasonable hypothesis that there were small populations on Symi a little to the south.

I’ll have to investigate further.  And I’ll have to track down the ‘Hellenistic Period Ruins’ on the other side of the col. 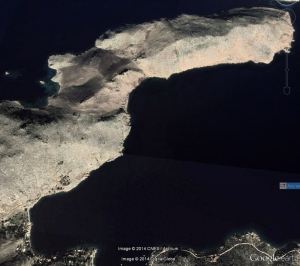 Zooming in on the crag and the col