Symi: a trek into the past

I’m fascinated by deserted settlements.  They show the stark effects of seismic economic shifts, technological development, and climate change.  They can also show how people lived decades ago.  Whenever I am on Tilos I visit and write about the deserted village of Micro Horio, each time see something ‘new’, and every time I pass the smaller of settlement of Ghera en route  to climb Oros Koutsoubas (which freely translated means ‘destroyer of sandals’ I take a brief look and promise myself a longer visit.

On Symi I regularly wander up to the deserted settlement of Gria in the crags above Pedi with its large permanent pond and try to look at it a different perspective each time.  Not many people seem to know it’s there even though it can be seen from the footpath down the Pedi Valley.  Of those that do know of it only a few seem to know how to get there and there seems uncertainty over what it’s called.

Just visible at the top of the crags above the Pedi Valley path, Gria

I wrote about it on the blog in May under the title ‘A trek to a waterhole in the desert’.   I will try not to repeat that but develop a couple of themes and focus the images more on the settlement than on the wildlife, which in May was eye-catching.

The first part of the route is very straightforward, on a newly concreted track up to the monastery of Zoodohou, tucked in a gulley high on the flank of the mountain at a spring, now piped as part of the island’s attempt to become independent of water tankered in from Rhodes. Two 6-inch diameter black polypropylene pipes are draped alongside the road the couple of kilometres to the village, ensuring that the water when it comes out of the tap in summer is hot.  I don’t need to boil water for washing in the house, the water from the ‘cold‘ tap is at times almost too hot to put my hands in.

Black polypropylene pipes draped across the landscape, heating the water as it goes

On my latest visit at the end of July I stopped at the monastery to refill my water bottle from the tap in the courtyard  …. and thought better of it.  For the first time since I have known it the water was not sweet but smelled and tasted unpleasant.  That set me thinking more about the theme I have mentioned on previous visits, that water abstraction is lowering the watertable with direct consequences for plant life.  It may be that the aquifer has been lowered to the point where the water may not be potable.  I have never drunk it from the tap in the house because of its trip through the pipe but I’m not prepared to drink it now even straight from the mountain.

From the monastery the onward route is a narrow path, at times difficult to follow.  A few stone cairns have been placed to supplement the faint red dots painted years ago but some of them are wrongly placed and don’t take the best line.  It’s a thoroughly enjoyable path, pretty wild, winding through craggy mountainside, but care is needed.  There is no great danger of failing to find the settlement, it can be seen in a small col on the shoulder of the mountain, but go off-line and the walk could be rough, with a couple of step gulleys to be crossed.  The path takes the most amenable line across them.

From the monastery the path is fairly obvious

Forget wardrobes and white rabbits, arrival at the settlement is a gateway into another world, a much simpler but harsher world of the past.

The gateway into the settlement …. or a time portal?

None of the half a dozen or so houses are now lived in but one is clearly still used as a temporary base.  The roof appears to be sound and it is equipped for cooking and eating.  No photos, that would be an invasion of privacy, but it was a very clear glimpse of the past.  Another house has a badly damaged tiled roof and is used for agricultural paraphernalia including sections of beehives.  These are one-room dwellings, about 6 metres by 3, with wooden sleeping platforms still intact.  A whole family would have lived in them, not a problem in summer when most living would have been outdoors but both had fireplaces implying that winters were less clement.

The sleeping platform, usually for the whole family, now with bits of beehive chucked on it.

Behind yet another house was a bread oven, probably used communally by the village as was the practice at the time.  Indeed we saw this in Karpathos a few years ago in the mountain village of Olymbos where one of the line of old windmills on the extremely windy ridge was still used.  Once a week the huge creaking sails turned to grind corn and the adjacent oven was fired up by the women of the village to bake bread …. and delicious cakes given away in the restaurant attached to the mill.

This all speaks of a lifestyle which would have been gruelling by modern standards of convenience, a harshness which on-one would want to go back to.  Yet it is part of the island’s heritage, still only just over the horizon.  There are many extant remains apart from the buildings themselves including agricultural and domestic artefacts: shelves, cupboards, utensils, implements, even bed-coverings.  This is part of the history of the people of Symi, the ‘ordinary’ people of Greece.

In Wales the very different, very simple, very poor lifestyle of the ‘common’ people of the past, the ‘folk’, is preserved for future generations in what is now called the ‘St Fagans National History Museum’, though I prefer the original name it was given when it opened in 1948, and still the name in the Welsh language,  ‘The Welsh Folk Museum’  as that ties the concept more to the history of the people rather than the history of the country.  The only problem I see with it is that the buildings have been removed stone by stone from their original location and rebuilt in a ‘parkland’ setting not that which gave rise to them.

I can’t help but wish something could be done to restore and preserve the lifestyle of places like Gria to help future generations, and foreign visitors, see how things were in the past.  But enough of that for now, a theme I may return to in a broader context.

Many large rocks between which the houses are built

An enclosure with nothing but flat slabs of rock 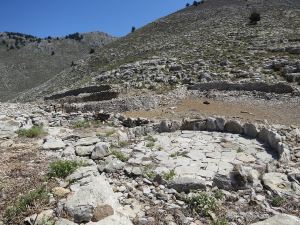 One of the threshing circles

The highest part of the settlement

This is the high point of the settlement, built into crags of sharp limestone, hidden from view from the beach at Pedi but one house just visible from the valley footpath far below. Drop down on a well trodden path from there through great lumps of rock towards small fields and yet another house at the lowest level of the settlement against a backdrop of even more crags.  The field is walled and fenced and obviously still used, though not often judging by the amount of wire keeping the gate closed against incursion by goats and nosy wanderers, a few beehives dotted about.

More fertile fields at the lowest level in the settlement.

The house within the enclosure is larger with remains of internal lathe and plaster walls, not just a single room 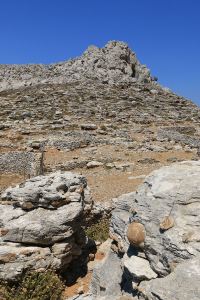 The onward path through the settlement towards the pond

A little further on and beyond all the houses is the pond, bright red dragonflies skittering across it, alpine swifts and swallows zooming at high speed across the surface slowing for a nano-second to dip an insect out of the water, defying all my attempts to photograph them.

……… sunlight glinting on its wings

I climbed the limestone crag behind the pond for a birds-eye view of the settlement.  Though only a few houses there are two threshing circles and extensive enclosures, now all totally barren except the ones at the lowest level with the beehives.

Looking across the pond to the crag behind 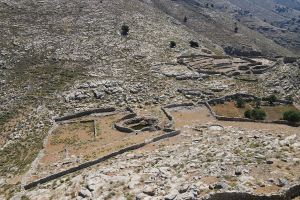 The extent of the enclosures

From this side of the pond it was clear how much the water level had dropped in the past 13 years since we first came here.  I estimate it has dropped by between 2 and 3 metres, that’s about 15 cms (6 inches) a year.  All the trees except one above the level of the pond are now dead, only a few remaining around the lowest level of the settlement and a few scattered, stunted cypress trees on the mountain above. 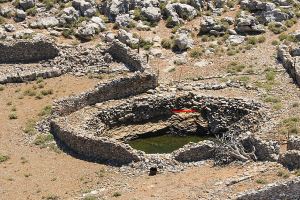 The red line shows the water level in 2001, about 8 feet below present day.  Note the dead tree in the foreground.  The only vegetation is oregano.

1 Response to Symi: a trek into the past