Symi:  to the castle … with a lot of distractions

When we first came to Symi 15 years ago the castle didn’t exist.  At least it wasn’t shown on the only available, very diagrammatic, walking map of the island nor mentioned in the imaginatively titled accompanying booklet ‘Walks in Symi’.  So to all intents and purposes it wasn’t there.

But now it has been discovered and Lappatoniou Castle is not only marked on the SKAï map of the island, which I have previously disparaged, but so is a footpath to it.  Recently, for the first time, I had a yen to visit, check it out for myself.

But there were many distractions on the way.

The first part of the route is up the narrow alleys of Horio and onto the very good, very dramatic kalderimi past Agia Paraskevi to ‘The Tarmac’, diagonally across that onto the concrete road towards the large monastery complex of Panagia Myrtiotisa (The Virgin of the Myrtles) and then left on the dirt track towards Agios Emilianos.  With the monastery up to the right, rather than continuing straight ahead onto the initially challenging footpath to Agios Ioannis Theologos and thence Emilianos, the track turns sharp left uphill.

That’s when it starts to become interesting and I was repeatedly distracted.

Following the post on the blog about sharp rock I e-mailed a guy in the USA who contacted me some while ago about using photos from the blog in a book he was writing on geomorphology.  I wanted to check out my dim recollection that it was caused by acid in rainwater.  He confirmed that it is indeed ‘solution weathering’ and said similar rock in southern Arizona is known as ‘tear pants limestone’.

The track I had turned onto had been bulldozed through the rocks with craggy, sculpted, very sharp limestone rising steeply to a ridge on the left.  I don’t tire of this stuff so ditched my rucksack by the side of the track and went clambering up into it like an excited  schoolboy, compact camera looped over my wrist, only to clamber back down again to retrieve the SLR which was safely tucked away in the bag.  There were the same sort of sharp-edged flakes but also whole faces of rock which you daren’t touch.  These could easily tear your pants as you brushed past.

‘Tear pants limestone’ with a view 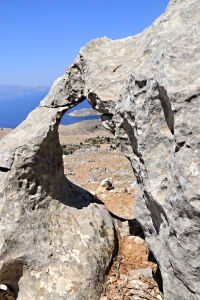 After half an hour or so I set off again, following the track to its end at the monastery of Agios Georgios Ftochos with a very shady courtyard for cool banana-eating and a fine black-and-white pebbled mosaic ‘hochlakos’ floor inside the church.

From there a narrow, now little-used, path climbs up through cypress trees to the large, walled compound of the monastery of Agios Nikitas Kotika, only a few hundred yards away but out of sight.  A new track has been bulldozed to it which is why the footpath is nolonger used.  It has an equally shady courtyard but much larger with sweeping views across the channel between Symi and Turkey, Europe and Asia, and a marble faced sundial aesthetically positioned.

Looking from the monastery courtyard across the channel

On the photographer’s knee

I was distracted again by the simple, pleasing, composure of the place but after 15 minutes started off along the narrow, in places very indistinct, path leading from the monastery along the length of the ridge towards the castle.

The map showed that the castle wasn’t set on top of the highest part of the ridge but further along closer to its end.  I’ve got a very simple mind which expects to find a castle on top of the highest ground around so I was intrigued as to why the top of the mountain was deemed unsuitable.  As if driven by irresistible force, I left the path and went straight up the steep rocky slope, topped by crags, to find out.

It became obvious.  The top was gently convex, offering nothing by way of natural defences.  The views were impressive but the shape of the mountain didn’t make it a natural lookout position either.

Nevertheless, there is something about being on the top of a mountain which is special.  It may not be the highest point around but all the other peaks are seemingly a stone’s throw away, some lower, a few higher.  There is a sense of shared distinctiveness, an affinity with all the other summits and anyone who may be on them.  You can’t help thinking: “I’ve got to the top of this, I could get to the top of all those others.  It’s no big deal.”  I sometimes sit on the top of a mountain, as I did now, and just look.  It’s a club with limited membership.

This trek was a little different.  I had not only been distracted from my ultimate goal by going off-piste to climb to the highest point, then failing miserably to capture the stunning view in a photograph, sat contemplating life, the universe and … just how great it was to be on top of a Greek mountain, but was then distracted from the distractions by the alpine swifts zooming overhead picking-off insects on the wing at incredibly high-speed, changing direction with an imperceptible change of angle of the tail or minute retraction of a wing.   I managed a couple of distant shots but most were blurred, a combination of sheer speed and small size making focusing nigh-on impossible. 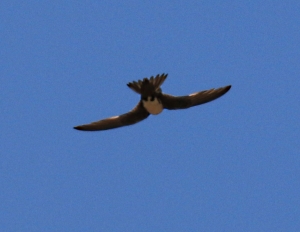 But eventually I had to shift myself, move on, and dropped down to follow the path as it continued along the ridge, now lower, towards the castle which came into view above the  trees.

As I picked my way through the rocks and thinking about the choosing of defensive locations for castles generally, in a moment of distracted madness I decided to keep to  the south side of the ridge rather than follow the footpath on the north to see what the crags were like on top of which the castle stood.  They were steep and very sharp as I found when I decided to climb them, emulating a would-be attack from that side.  Centuries ago someone would have dropped a rock on my head as I tried to avoid severing the ends of my fingers or tearing my pants.

I can’t believe I chose to climb this!

I was glad to reach the narrow plateau on top of the crags and look down to the sea about 1500 feet almost vertically straight down.  This was certainly a much more defensible location.

Then yet another distraction.  Dragonflies were flitting around on the narrow platform leading to the castle, now in clear view.  It always amazes me why they go up to the tops of mountains and why they perch on the top of twigs.  I was grovelling on knees and elbows to get a shot with the sky as background when probably the weirdest thing I have ever seen ambled past.  It, or rather they, though it did seem to be a single entity, walked at a deliberate but fairly rapid pace in front of me, I lowered the lens of the camera and took a couple of quick shots intending to follow up when I had finished with the dragonfly but it disappeared in a few seconds. The photos look like the sort of blurry images fabricated to prove to the gullible public that there are alien invaders.  This certainly looked alien but then our mental images of aliens are from the minds of people who I suspect feed their imagination with creatures from the natural world. 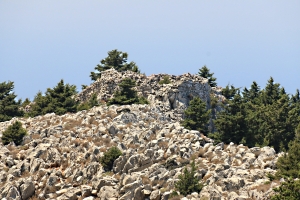 Looking across the boulderfield to the castle 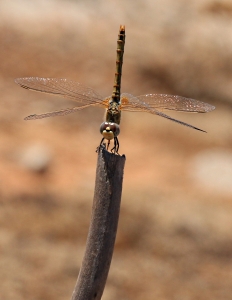 doing a handstand on a stick

contemplating what to do

this is the biplane look 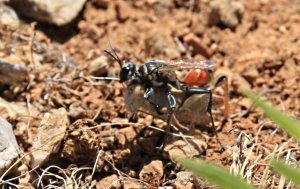 Finally, the castle.  Lappatoniou is slightly larger than some of the minor castles on the islands but still not a very impressive structure to those of us familiar with the huge castles in Wales built to keep the invaders safe from the marauding locals.  It amounted to the remains of  stone walls on top of vertical crags to create a small defensive enclosure.  Much more impressive were the views.  Even though 50 metres or so lower, towards the end of the ridge the panorama was wider, less interrupted, than from the highest point and would have given plenty of warning of approach from the sea whence piratical danger lay.

Castle walls on top of the crag, Agios Emilianos island monastery in the distance

From the far edge of the castle, a great lookout point

I walked back along the north side of the ridge on the footpath.  The crags were not as steep, nor as high nor as sharp but still interesting if you like rock.  Back on the bulldozed track, looking again at the sculpted limestone boulders on the ridge rising above,  much easier walking,  mind relaxing and wandering.  Why do dragonflies perch on top of sticks on mountain tops?  What on earth was that weird insect combo?  Why is soil from white/grey limestone always red?  Why can’t I ever go straight from ‘A’ to ‘B’ without getting distracted?  Answer to the last is simple.  It’s more fun!

One day this will fall off

Looking up to the ridge