Hopping between Greek islands has become more difficult over recent years as older, less efficient boats were deemed financially unviable or failed to meet rising safety standards and have gone out of service.  Operating companies are fewer in number and struggle to continue even with Government subsidy.

This means that in some cases islands may be relatively close together and yet have no direct ferry link.  This is the case with Tilos and Nisyros two of the islands I hope to visit from Symi during the summer months.  There is a regular Big Boat ferry from Symi late on a Friday evening but no direct service back, requiring a long and expensive return via Rhodes or Kos.

There may be fewer inter-island links but in many cases those which remain are significantly faster and more punctual, particularly so Dodecanese Seaways which runs up and down the Dodecanese islands close to Turkey.  So when I heard from friends on Tilos that the island’s ‘Sea Star’, was in Piraeus having her bottom scraped,  and that until the end of June, Dodecanese Seaways , or the ‘Spanos’ as it is known now it has been taken over by the supermarket chain of that name, was running  to Tilos on Saturday evening, overnighting, and returning early on Sunday morning, it was too good an opportunity to miss.  I went for a week’s walking.  And the odd bit of swimming

I often decide what I’m going to do as I go out of the door in the morning, even change my mind part way and go by a different route or to a different destination.  Not so my first day on Tilos.  My decision was determined by practicality.  A very enjoyable but taxing path begins at Agios Panteleimon, the large Byzantine monastery at the north end of the island, which can only be reached by bus once a week, on Sunday morning.  It is not even possible to take a taxi as the island nolonger has one.  No point in hiring a car – no way to retrieve it afterwards.  I had just one shot at this, my first day on the island.

The bus leaves the harbour at 11.15, arriving at the monastery about 12.00.  It was packed, all seats occupied and at least 20 people standing all the way as the tin box on wheels became an oven under the near-solstice sun.

After leaving the monastery there is no shade on the route, 8 miles through the midday heat.  I hoped that my acclimatisation programme on Symi, setting out for short walks around noon, would pay dividends.  My arrival on Tilos seemed to coincide not only with completely clear skies but rapidly rising temperatures. Fortunately on Sunday the edge was taken off the heat by a stiff breeze which made for very good walking conditions.

The route is long and committing in the heat of summer with no opt-out alternative: you finish or you turn back.  Route-finding is difficult in places and people have been known to wander around trying to re-find the path for a couple of  hours.  That’s maybe why friends who also happened to be on the bus chose to walk the shorter and in some ways more spectacular path to Agios Andonis, dubbing my route the ‘kamikaze trail’.  It is difficult.  It can be dangerous.  But it’s not that bad!

The beginning of the route is very helpfully signed by a green-painted finger-post at the side of the monastery entrance and a short flight of wooden steps to a path following the high stone wall around the top of the compound.   The point where the path leaves the monastery is not clear, stepping over large rocks to find a trail which from then on is fairly obvious for a while as it climbs up to 400 metres at the foot of high crags and crossing a scree below the peak of Profitis Ilias, Tilos’ highest mountain, before reaching a col where all sight of civilisation is left behind.

The Byzantine chapel at Panteleimon monastery 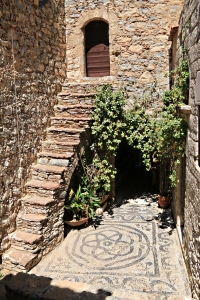 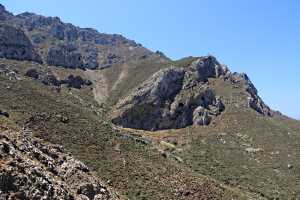 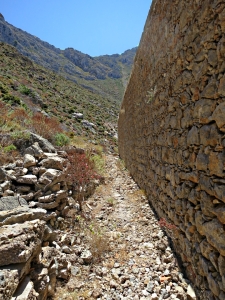 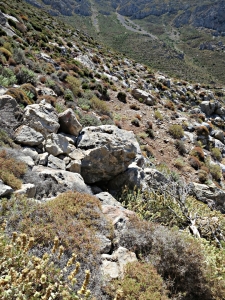 …. and then strikes out across large rocks 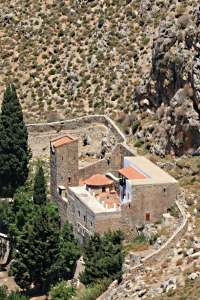 Looking back as the path climbs above the monastery

The path leads towards the high crags

…. and leads across a scree below cliffs

Looking back from the foot of the crags 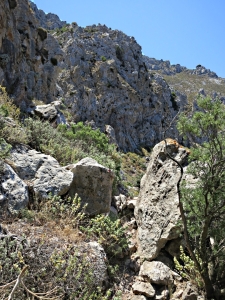 A short distance to another col and large flat slabs of rock, great for a banana-break while looking north to volcanic Nisyros, Nikia on the rim of the caldera white against the dark mass of Oros Diavatis, that island’s highest point behind it.  Resisting the temptation to sit and look, or even doze in the sun, I was mindful that I was aiming to pick up a bus from Eristos, the beach at the end of the trail, at 16.45 as I didn’t want to wait for the next one at 19.15 …. and  I had scarcely begun.

Wide panoramic view from the slabs in the col. Nisyros in the background

Zooming in on Nisyros, the caldera-rim village of Nikia clearly visible

From the slabs the nature of the path changes, to loose red shaley rock, easy to find but needing care to avoid sliding.  Despite a firm intention to make progress and to concentrate on broad views rather than detail there are still distractions which cannot be ignored, such as chasing a dragon fly through the vegetation, its large eyes seeing me coming and moving off before I can get the camera in range and focused.  The long descent on the red shale comes to a small spring, clean, sweet water dropping from a carved marble spout into a muddy puddle.

….. and looking down on the long descent to the spring 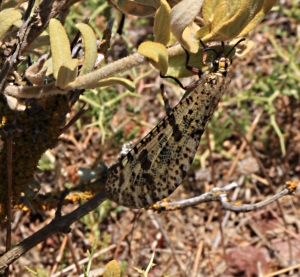 Lurking under a plant, spotted when it furled its wings 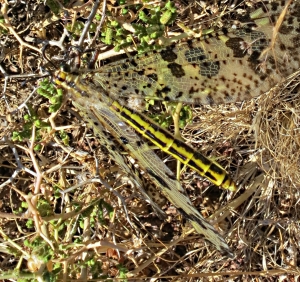 Understandably a number of animal tracks lead to the spring, some clearer than others, all of them seeming to be potential routes onwards.  Goats and sheep, especially the latter which follow each other nose to the ground line astern, have been treading these trails for decades if not centuries and now they are well worn with no indication which is the footpath to Eristos.  The mountain rises up steeply on the left and must be crossed at some point but the way ahead from the spring is to keep to the same level and after  a short distance fading red paint marks and the occasional small cairn confirm the decision.

Then the climb begins, picking a way over rocks, looking for cairns in the middle-distance to get the right direction and picking a line by reading subtle differences in colour showing centuries of wear.  Surprisingly, one short section is built up with stone terracing around the edge of a crag like a kalderimi.

Over the shoulder of the mountain and down to an old abandoned chapel dedicated to the Panagia (the Madonna), then a drop into a gulley again with myriad optional ways ahead. From this point very careful attention to fading red paint splodges and small cairns is essential as the route emerges from the gulley and meanders vertically and horizontally but inexorably upwards over very rocky ground towards the final col before Eristos comes into view.  A great pleasure is to pause for a slurp of remaining bottled water at ‘The Terrace’, flat rock slabs among very broken and sharp limestone crags, gazing longingly down to the enticing cool of the sea far below.

The long-abandoned chapel of ‘Panagia’ in the middle of nowhere

Reaching the flat slabs of The Terrace

When the col is finally reached at just shy of 300 metres between the main ridge of Profitis Ilias and Patella (the medical term for ‘kneecap’) it is still a long drop  over more than 2 miles down to Eristos and the bus back to Livadia. 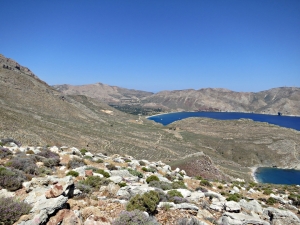 I arrive with 20 minutes to spare before the bus.  Water bottle drained.  Great walk!

2 Responses to Tilos: the kamikaze trail