I’m back on the Hot Rock now.  Straight from Cool Britannia to temperatures in the high 20s.  Locals say that the weather is bizarre for June.  Before I arrived there was a thunderstorm with very heavy rain overnight and strong winds.  Now it seems to have settled into stable cloudless skies and  mid-July Hot Rock heat, increasing by the day as buildings, stone paved alleys and bare limestone absorb more between dawn and dusk than they radiate overnight.

So, I need to acclimatise to the heat pretty rapidly. The afternoon that friends left I set out for a walk at midday and quickly realised how much things had changed.  It was significantly hotter and the landscape more arid.

Again the trek began with a walk up through and out of the village to The Viewpoint.  This time I focused more on the spectacular panorama rather than wildlife detail.

The panorama from the viewpoint 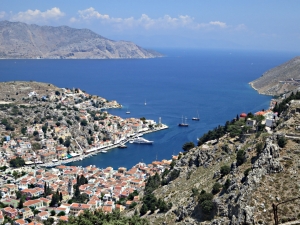 zooming in on the view down to the main harbour

zooming in on the view down Pedi Bay

From there the old kalderimi, stone paved in places, over bare rock outcrops in others, continues up past the small chapel of Paraskevi with its deliciously shady courtyard affording welcome brief respite from the baking sun.

Through the gate onto the open mountain and the kalderimi splits 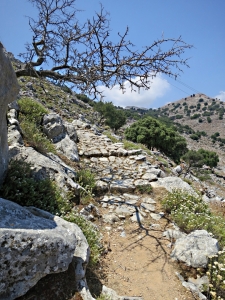 … with its shady courtyard

Soon after the path diverts off to the right and climbs up to slabby rock outcrops with views straight down the valley to the harbour far below.  Now, among the bare rocks nearly all vegetation has crisped up, blowing away in the breeze as it snaps.  Dried flower stalks thick as a finger and strong as wood puncture skin if you’re not careful. 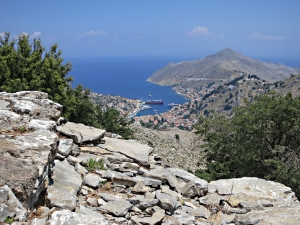 Looking from the rock slabs down to the harbour

the landscape rocky and arid 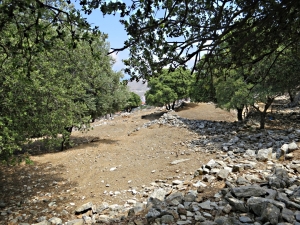 Reaching the ridge and the military ‘No Photogrpahy’ zone there is a newly built tiny chapel in a newly fenced compound, with a last look down to the harbour even further below, before the drop down on the road to the Rakouniotis monastery.  Having visited that only recently I instead went up to the right to the remains of a stone-built tower sitting on the ridge-top with views in all directions. 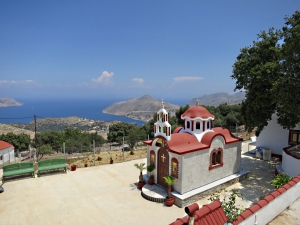 The stone tower on the ridge

… and on the inside

Continuing down the road for while the aridity of the rocky landscape becomes even more apparent, dominated by weather- and water-sharpened limestone. 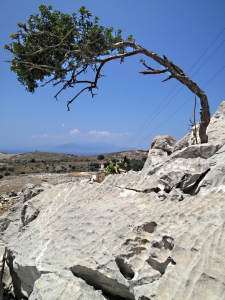 Sharp, eroded rock and gnarled tree struggling for life in a cleft

Soon the route turns off onto a rough track and then onto a narrow path winding its way up to the flank of the mountain overlooking Nimborio Bay and beyond that the mountains of Turkey topped by towering thunderclouds.

This thoroughly enjoyable and satisfying path winds its way at a fairly consistent height above the Bay before gradually dropping down to the track to the church of Agios Giorgos Drakouniotis and the way back to Yialos, the prospect of a frappé on the harbourside before the climb back up the Kali Strata to Horio.

The thin path through contorted and folded limestone

Old olive press indicative of the agricultural past

Final drop down off the ridge to the col 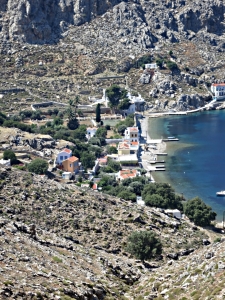 Attempts to photograph a Little Owl and a kestrel on this walk all failed.  I didn’t even try to photograph the swallows, their speed and erratic flight in pursuit of insects on the wing making it impossible to focus the camera.  Swallows have been zooming in and out of the open windows of the derelict house behind where I’m staying and I have also been vainly trying to photograph them feeding their young in the nests but access has proved too difficult and dangerous. Paradoxically, I called in a supermarket on the way back from this trek and was surprised by swallows zooming in and out of there too.  It soon became apparent why.  They have nested on top of the light fittings and were perching on the wrought-iron lamp-holders.  Not brilliant photographic conditions but not to be missed, much to the surprise and consternation of the proprietor.

Young swallows in nest on top of light fitting 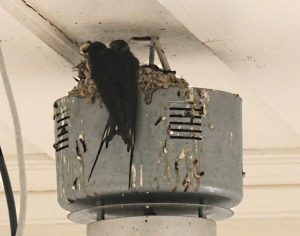 … while another looks on