The paper tablecloth in Irinis restaurant in the old square had a map of the island.  Sipping my wine and waiting the few minutes before my fresh goats cheese, tomato and cucumber starter arrived, I glanced at it idly.  Annotated in Greek it had written across the mysterious, inaccessible southwest corner of the island, «Δρακοσπιλιά», (Drakospilia) , ‘Dragon Caves’.  It was a name I had neither heard nor seen before but which aroused my interest.

When I quizzed Irini she assured me that, yes, there were indeed caves and yes, with a twinkle in her eye, there were also dragons.  Good sense of humour has Irini. Let’s be honest, a map, even if it’s on a tablecloth and not on a battered parchment scroll discovered in some ancient wooden chest, saying in essence, ”here be dragons” just has to be checked out.

I had walked into this area before, very definitely off piste.  First a walk up to a col at a little over 1000 feet, partly on enjoyable meandering paths through agricultural terraces and then a trudge along a track bulldozed over the col to the caldera by a thermal energy company with an abortive promise of ‘free energy’, thereby completely destroying what is fondly remembered as one of the best kalderimia in the Aegean.

Then a drop off to the right towards the distant coast on another kalderimi, much of it  on top of a stone walled embankments scything down the steep terraces which contoured the mountain, so as to make the route donkey-friendly.  This one not vandalised by financial greed but sadly severely damaged by neglect as the area depopulated.  Now it is only visited by arrogant rifles and dogs at the beginning of the hunting season (mid September) and  by goat farmers. Enjoyable but not easy walking.  Frequent reminders that it is an environment unforgiving of mistakes.

The kalderimi on top of stone walls, crumbling with disuse 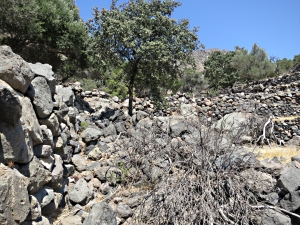 … and increasingly blocked by collapses and aggressive vegetatio

Getting on and off the kalderimi into adjacent terraces to by-pass encroaching and overwhelming vegetation and collapsed walls became an increasing necessity as I approached the coast but no real problems until just a few hundred metres from the sea.  I came up against a goat-proof fence completely blocking onward progress.

Goat fences are made of 2 metre high chain link wire stretched between steel 10cm-diameter reinforcing rods rammed into the ground, unclimbable without certain risk of ripped flesh. Eventually I found a drop into a compound below a 3-metre high stone wall overhung at the top by thorn-brushwood and assorted scrap timber. I managed to down-climb by negotiating the overhang created by a horizontally placed louver door and get onto the stone wall below and find hand and foot holds on that.  Just a few irritating scrapes and grazes and many unkind mutterings about Greek goat farmers in the process.

It was worth it.  I already knew from previous visits to this remote area that there are a number of shallow caves a bit further inland, scrapes in soft volcanic deposits, though there are none along the coast at this point.  But the soft cliffs with lava boulders tumbling down to the sea were dramatic, the  lava formations even more so.  And there were dragons! 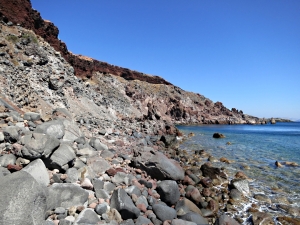 Large boulders tumble out of the ash-conglomerate cliffs

Zooming in on the colour-contrast

Lava boulders scattered around, the bulldozed track clear in the background 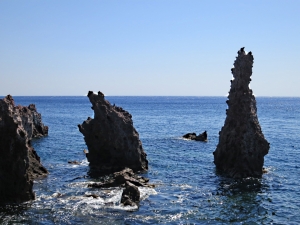 Lava stacks in the sea 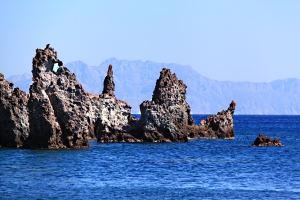 …. and zooming in on one of the dragons 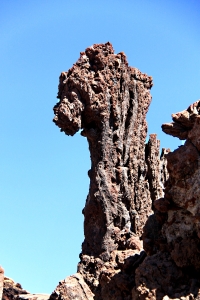