Nisyros: the Lost World, a trip into history

In most places the evidence of the every-day long-ago past has been wiped away or crumbled into the ground.  Large, grand structures like Stonehenge remain but the places where the majority of people lived has long gone evidenced only by post-holes and slight circular mounds visible only from the air at dusk.  One of the fascinations of Nisyros is that hard evidence of what life was like for ordinary people is everywhere, set in stone.  I put together a walk following old routes between long abandoned settlements.

First, I dropped down an old kalderimi towards the floor of the caldera from the village of Emborios perched on its rim.  The stone-paved donkey path, renovated a few years ago,  is still in good condition with the exception of one point where a dead tree, victim of drought, has collapsed blocking it completely and, with only the limited capacity of secateurs in my rucksack, meant a scramble on loosed ground to the side.

Narrow, terraces supported by high stone walls curve around on either side of the path, interrupted only by towering crags of lava.  Everywhere old stone houses survive beneath the terraces, robust stone arches giving them strength to withstand the tremors which have shaken them for centuries.  Only occasionally has one collapsed, the terraced field which had been the roof slumping inwards.  At the side of the path ancient sterna and basins carved from lava lie seemingly untouched for generations.

Bat colony: taken without flash so as not to disturb them

Now a tarmac road zig-zags down into the caldera and runs along its length to the crater-side taverna. The kalderimi reaches the road at its final hairpin bend with a  small cluster of old houses, home now only to a colony of horseshoe bats.Cross the tarmac and the kalderimi resumes, but now much more overgrown requiring diversions into the adjacent terraces which become wider as the steep slopes shallow out.  A pair of ‘semi-detached’ stone buildings on the right have a walled courtyard outside and an entrance into it topped by a huge stone lintel, obviously a more –up-market residence in the past. 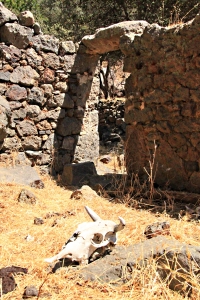 Diving on and off the blocked kalderimi and I soon reached a substantial cluster of 20 or so houses built higgledy-piggledy into the terraces.  This was obviously at one time the main settlement in the caldera, elsewhere the houses are individual or in twos.  The supposition is supported by a large bowl carved out of lava and a fragment of one made from fine white marble which would have been much prized as a  symbol of wealth and prestige.  The supposition is also supported by a large boulder, carved into a prestigious ‘seat of office’ presumably where meetings were held and justice dispensed. 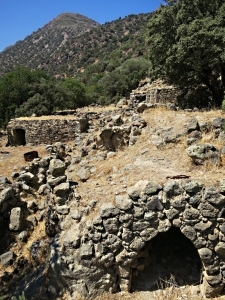 Some of the large group of houses set into the terraces

The arches inside one of the houses 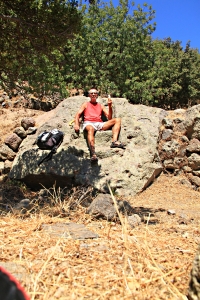 Holding court: it’s easy to be King of the Swingers when there’s no-one else around

Cows and goats wander around this ancient village but I suspect that no-one comes here much, if at all, even though the tarmac road is only a couple of terraces above and the tops of the coaches taking trippers for their volcano experience can be seen as they thunder by. Certainly the farmer doesn’t come down here.  He rides around the hairpin bend on his scooter, backwards and forwards calling to his animals from the saddle.

Pushing on now onto the wide, open space of the caldera floor and the kalderimi disappears, replaced by countless paths trodden by cows and goats, with very clear evidence of frequent and recent use.  I head for one of the still-active craters but more about that another time. 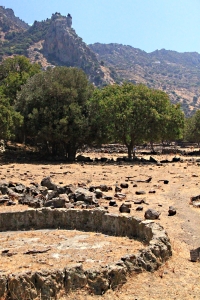 Instead, head on a path into a col on the return leg to Mandraki via Evangelistra.  It’s a steep pull up with a long section of loose scree.  Immediately after topping the scree is another small cluster of dwellings, these all built underground, onto small caves or under overhanging rocks.  The terraces are here are very narrow and the houses smaller, probably abandoned long before those on the caldera floor partly because the soil is poorer partly because they are so remote.

That remoteness would have served them well when attacks by pirates were common in the Aegean.   Clamber onto the earth roofs of a couple of houses alongside the path, hop across boulders choked by prickly oak and nestled into a steeper part of the crags, completely hidden from sight from the path a series of 3 interlinked dwellings set into the rocks. At the back of one is a small chapel, reminder that for centuries Christianity was persecuted in this part of Greece.

Though well over 1000 feet high and still climbing, the path is now walled and rough paved, again obviously a significant settlement in times long past.  Terraces are tiny, every scrap of available soil being collected in small pockets, houses only occupying ground where nothing could grow.

Walk across the roofs of these houses to the boulders beyond

…. and hidden in the jumble are 3 openings into houses 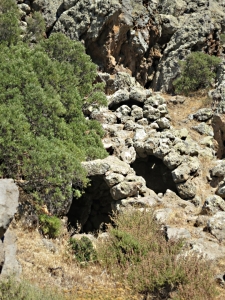 …. zooming in for a clearer view

The chapel at the back of the furthest

Walking up the main street at over 1000 feet

Built underneath a rock with field overhead

….. and taking a look inside

Fascinating!  I only wish I had the ability to go back in time and see what things were really like when these places were thriving communities.

4 Responses to Nisyros: the Lost World, a trip into history