Gherondas, the third of the small peaks backing Livadia Bay which I set out to find a way to the top of, proved to be as interesting and distinctive as the other two, Thymadheri and Vounos

Again  the initial approach is along part of the seafront past the sunbeds and the mid-morning prostrate flesh ranging from alabaster white lathered in ‘factor 60’ sunscreen, through pink with a smear of ‘factor 20’, lobster red of the overcooked, to deep Mediterranean brown.  Some lie spread-eagled, toes pointing to the sun, equidistant between the sea and the taverna.  Others set up camp in the shade of umbrellas, tamarisk trees or both, inflatable green crocodiles close to hand.  The stroll along the very pleasant beachside walkway is a battle to avoid being either voyeuristic or appalled … relieved by the occasional sight of friends.

A short distance inland a concrete road doubles back parallel with the seafront, climbing steeply towards the small church of Agia Anna on a rocky knoll overlooking the town.  The concrete road, like so many, seems to serve no real purpose.  It stops short of the church leaving a very steep scramble up a rubble-covered track.  Maybe the road is used once a year on the name day of the saint for a small festival.  Cynics might suggest that the real purpose of the road is more likely to be to facilitate the sale of bits of land for house building, attracting EU funding for political but no practical benefit.

Gherondas seen from the other side of Lividia Bay, Agrosikia Castle on the left, the highest point out of sight beyond false summits

Then onto the good stuff.  From behind the church a thin path zigs back again, picking its way up terraces choked with thorn scrub towards a high vertical crag. From the foot of the crag the path climbs very steeply into a narrow gully with animal enclosures and an old spring.  An enjoyable scramble and a teeter around the narrow top of a wall backed by a wire fence. 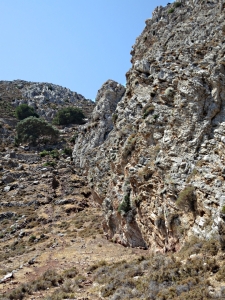 Approaching the steep gully at the side of the crag 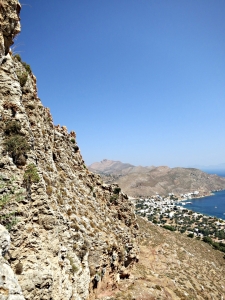 Looking back down past the crag to Livadia

After a welcome rest and swig of iced water in the shade of large boulders with ravens croinking overhead, annoyed at their solitude being disturbed, a short climb up the rocks led to another thin path winding towards the dramatically located medieval castle of Agrosikia.

However, to get to the top of the mountain I left the path and went straight up through the thorn-covered, stone-built terraces.  Less usual were stone boundary walls.  Short sections of goat path helped the upward progress but, as on Vounos, again it was sometimes better to climb the rock rather than push through the thorns. It was relatively slow progress but after a series of false summits the altimeter on my watch confirmed that I was at the highest point, exactly the same height as the previous highest point 10  minutes before.

To the north and nearly 100 metres below was Agrosikia Castle on its craggy eminence and far below that the mediaeval harbour of Agios Stephanos which I visited on the way to Thymadheri on the first sea-to-sky trek.

Looking north from the high point

Zooming in on Agrosikia Castle and Agios Stephanos harbour

To the south, seemingly right below my feet, albeit 370 metres below, was Thollos Beach.  I had made good time and was pretty euphoric so decided to head down there for a swim.  But not before visiting Agrosikia Castle.  A drop down more thorn-choked terraces, onto a rough track, a short stroll across the shoulder of the crag and I was there.  To get into the castle means dropping down a shallow gully below it and then scrambling back up diagonally.  Needs a good head for heights but isn’t difficult.  The castle is diminutive by the standards of the many in Wales like Chepstow, Raglan, Pembroke and Caernarvon and the inside is little more than a heap of rubble  but the setting, perched on the edge of vertical cliffs, is well impressive, certainly worth the slight diversion.

Relaxing on the top, Thollos Beach at my feet

Zooming in on the beach

Ignoring the rough track down from the castle I chose the good and far more interesting cairned footpath passing through another long-abandoned settlement. The path ends at the tarmac road in a col with the path down to Thollos beach immediately opposite, signed by both a green wooden finger-post appropriate for a footpath and a blue and white metal sign which anywhere else would apply metalled road .  There seems no end to the projects of doubtful utility to which EU funding has been put.

The path down to Thollos is one of my favourites and I would probably follow it even if it didn’t lead to arguably the best beach on the island.  First it drops down at a good gradient with a clear way through the vegetation on deep red gravelly soil and then drops more steeply with grey limestone and amazingly folded, gnarly red rocks and dark green slabs towering overhead in the narrow gorge.

The easy start to the path down to Thollos 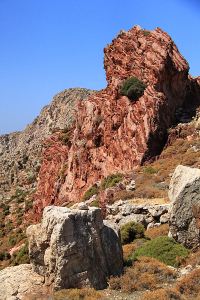 One of the dramatic red, gnarly rock crags in the gorge

The main beach at Thollos is a mix of fine gravel/course sand made up of the red and green rock and small limestone pebbles but climb through the vertical cleft in the red cliff on the right and you come onto ‘Green Thollos’ (my name for it) with uniformly green sand/gravel, and a large overhanging cliff giving shade from the sun until about 15.00.  The main beach attracts few people, maybe 6 or 8 at a time if you are unlucky, because it can only be reached on foot and involves a bit of mild scrambling but Green Thollos is rarely visited.

Rock sentinel on the final approach to Thollos Beach

The vertical cleft in the red crag leading to Green Thollos

The colour of the main Thollos beach 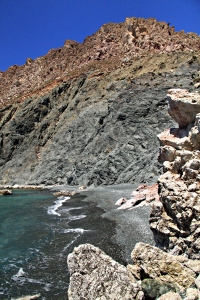 Standing in the cleft looking at Green Thollos 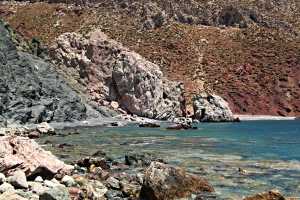 From round the bay looking back towards both Thollos beaches

After several iterations of the ‘swim/dry-off-in-the sun/get hot/swim’ cycle it was a 30 minute hot pull back up to the col and then another 30 minutes drop down a good path/rough track combination to get back to the beach at Livadia, another swim and an ice-cold beer.  It’s a tough life but somebody has to do it.

Altogether a very satisfying conclusion to my three sea-to-sky walks on Tilos. Maybe not very ambitious but very enjoyable and I encountered no indication that anyone else had been up on the peaks any time recently.  Having sussed them out, maybe next time I’ll do all three in a day making sure that there is plenty of time for swimming of course.